Following the drilling of all the #40 holes in the RV-12’s roll bar assembly to #30, the roll bar assembly was dismantled for deburring. After drilling, care must be taken to make sure the correct orientation of the F-1231B&C straps is maintained. Small loops of wire and name tags were placed in the lower aft most holes and the plans marked accordingly so during assembly later down the road after primer and paint, the parts will fit correctly. The outer holes of the F-1231A roll bar frames were easy deburred, but the standard deburring tool did not have enough clearance for proper deburring of the inside holes. For the inside holes, the angle drill attachment came in handy once again … the deburring bit was removed from the deburring tool and screwed onto the end of the angle drill. The shaft of the angle drill was then turned by hand to rotate the deburring bit a turn or two to remove the burrs. Worked quite well. A word of caution … don’t even consider attaching the angle drill attachment to a drill gun, it will spin the bit way too fast and quickly cut into the rivet hole far too deep. 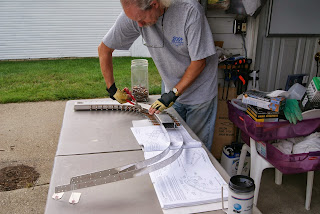 Breaking down the RV-12’s roll bar assembly for deburring and machine countersinking. Note the tags placed on the bottom aft holes of the F-1231B&C straps to insure correct orientation during reassembly. 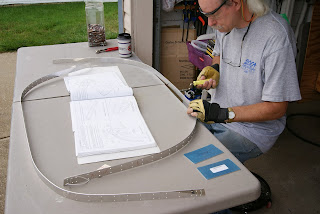 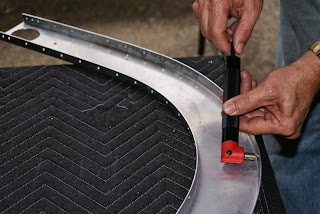 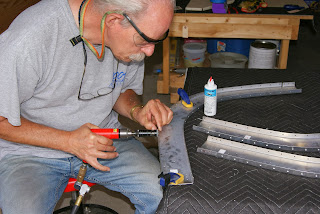 Machine countersinking the outer flanges on one of the F-2131A roll bar frames
using a countersink cage outfitted with a #30-120 degree countersink bit.
One thing I've noticed about the flush 4-4 pop rivets Van’s supplies with the RV-12 kit is the heads are slightly smaller than the Gesipa 4-3 pop rivets being used on the project. I knew this, but forgot to back off the countersink cage a few clicks … so the first hole countersunk ended up being a little deeper then optimum ... oh well, at least I noticed.  Also suggest builders stop the countersinking prematurely in the areas where the curves are on the F-1231A frames and check the countersink depth. Because of the curvature of the frames, the countersink depth can easily end up deeper than those on the flat areas … so adjust your technique accordingly.
Posted by John at 6:14 AM