Due to cold overnight temps and less than optimum daytime temperatures, decided to hold off until tomorrow to spray the Jet-Flex interior paint on the recently primed fuselage parts visible from inside the cockpit. 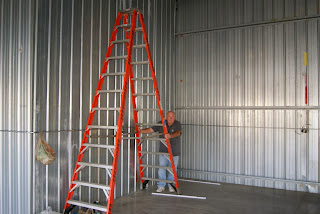 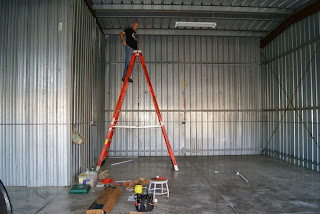 Up on the ladder about to install another beam clamp and bridle ring to secure the light’s power cord. 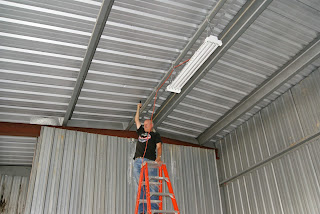 Using a nut driver to secure a beam clamp onto the overhead beam.
The electrical outlets are still not totally completed because the light switch for the new overhead fixture still needs to be installed in the electrical box. However, due to other commitments, we were not able to finish the job today. There is really only about 15 minutes of work left to do and all the electrical upgrades will be finished. At some point in the future, will likely add two more lights and perhaps an outlet on the hangar’s forward right wall.