Moving forward, began prepping section 24 parts. The RV-12’s roll bar is the first item in section 24 to deal with. The main portion of the roll bar assembly is comprised of six parts. Each forward and aft hoop is made from two F-1231A  halves and connected together at the top and bottom by two straps of metal. 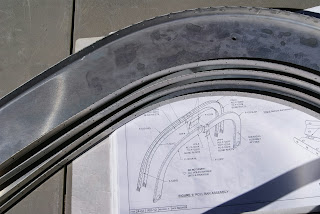 The four F-1231A roll bar halves had some sharp edges so the components will be hand filed. 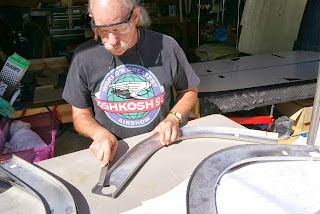 Filing the sharp edges down on the four F-1231A roll bar forward and aft halves. 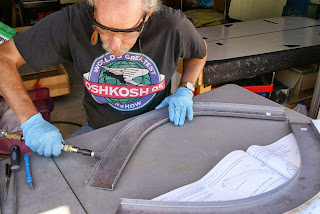 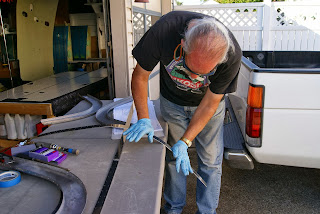 Creating a curve on the F-1231B strap by carefully sliding the strap over the edge of a table to form the curve. 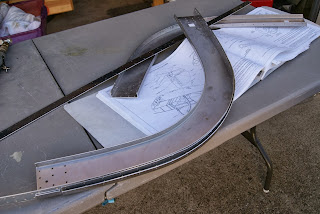 F-1231B strap after some forming setting inside one of the forward
roll bar halves. Almost there … just needs a little more tweaking.
After the bend is formed on both ends of the F-1231B strap, the same process is used on the F-1231C strap to form the inside curve of the roll bar.
The plans instruct the builder to Cleco the roll bar components together so all the #40 holes can be final drilled to #30. Once the holes are drilled to final size, the rivet holes on the flanges of the left and right aft halves of the roll bar that lie directly underneath the rear window, are to be machine countersunk for flush rivets. 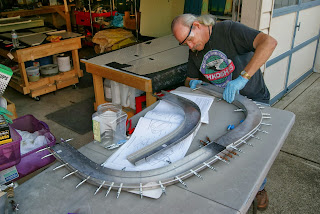 Placing one of the aft roll bar halves onto the forward roll bar/F-1231B&C assembly. 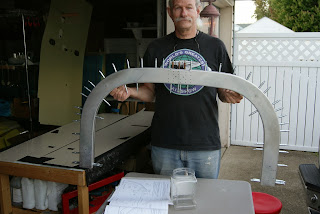 Roll bar assembly secured with Clecos and ready for final drilling.
Due to a late start, did not have the time to final drill and machine countersink the roll bar assembly today, so that will be the first order of business tomorrow.
Posted by John at 8:34 PM