Prior to priming yesterday, the last few time consuming components worked on this week were the cockpit vent doors. The F-1286 and F-1287 vent brackets and slides required being separated on the band saw and deburred. These parts have lots of nooks and crannies that needed to be deburred and smoothed ... so for a simple assembly, the vent components took up a respectable amount of time to prepare.

The left and right vent doors are comprised of four pieces … the F-1093 vent door, F-1092 vent door doubler and F- 1087-A&B vent slides … all of which needed to be match drilled to one another using a #40 drill. After match drilling, all the holes both F-1093 vent doors require machine countersinking on the outboard side using a #40-100 degree bit. 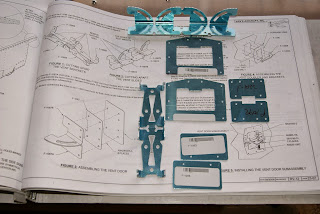 After the vent door components were drilled and countersunk, the F-1096 vent doubler and F-1086-A&B vent brackets were secured onto the F-1270 fuselage skins for match drilling to #30. After match drilling, the holes in the F-1270 fuselage skin surrounding the vent were dimpled for flush rivets being used on the RV-12 using a #30-120 degree dimple die. Also, the rivet holes in the vent doubler and brackets were dimpled as well. 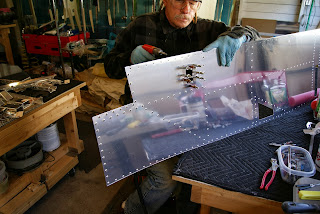 Match drilling the F-1270 fuselage skin into the F-1096 vent doubler and F-1086-A&B brackets.
After dimpling the vent area on the F-1270 fuselage skins, I noticed the plans have the builder place dimples for nutplate rivets in the area where the electrical connector to the wing will be installed. The plans mention squeezer yoke access is bad for a couple of rivet holes that require dimpling and to manually pound the dies together. After reading that, decided it prudent to place those #40 dimples into the F-1270 skins using the C-frame while the skin was on the bench and access was not an issue. 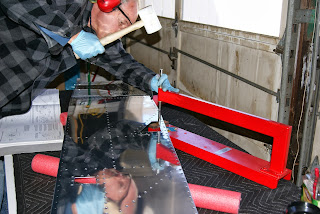 Using the C-frame outfitted with #40-100 degree dimple dies to dimple the nutplate rivet holes in the area where the electrical connector for the wing will be installed. Far easier to do now than when the skin is on the airplane, plus the dimples will all be primed.
A pair of floor pans were almost overlooked so they were quickly deburred, edges smoothed and the outer flanges touching the F-1270 skins were dimpled for the flush rivets being used on the project. 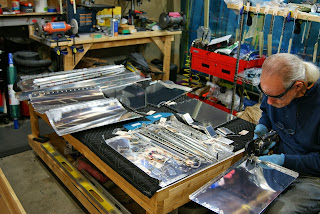 Dimpling the rivet holes on the outer flange of a floor pan for flush rivets
using the pneumatic squeezer outfitted with #30-120 degree dimple dies.
As one can see in the above photo, there is a plethora of parts on the bench ready for priming including both F-1270 fuselage skins not in the photo. All of those parts were cleaned with Acetone, scuffed up with maroon Scotch-Brite pads and re-cleaned with Acetone. Yesterday, all the parts were primed with Akzo primer. The majority of those parts will be receiving a Jet-Flex top coating as well.
Posted by John at 7:23 AM