DOG Aviation had its first taste of fall temperatures Friday night so there was not a lot of enthusiasm for getting an early start in a cold shop knowing the temps later in the day would get to 60. Fortunately, the cold front passing through will be short lived and there promises to be good spray painting weather early in the coming week … so a push is on to be ready for the warmer weather to spray primer and top coat on as many components as possible.

Prior to starting on dimpling, decided to prep the F-1248-L&R armrests. The plans call for cutting a notch into F-1248 armrests in the area where the F-1203G bulkhead side channel  passes through. The locations where the cuts needed to be made were into the piece far enough that the band saw could not be used to make the cuts. The trusty nibbling tool was used to make the cut on both pieces followed by a deburring. Also had the opportunity to use the new sanding sticks and have to say, they work quite well for taking the edge off the aluminum in tight spots. 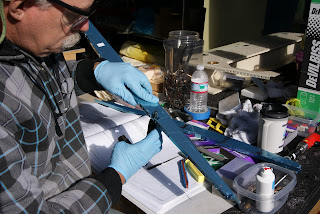 Using the nibbling tool to cut the required notch in the F-1248 armrest. 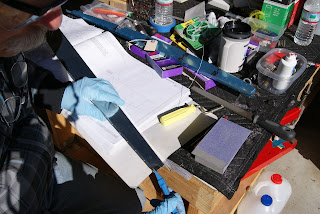 Using one of the new sanding sticks to remove a sharp edge on the inside of one of the flanges on the F-1248 armrest.
After the armrests were deburred, the pneumatic squeezer was outfitted with the #30-120 degree dimple dies and the armrests were dimpled for the flush rivets being used on the RV-12 project along with the W-1271-L&R corner skins, bottom flange of the F-1217A-L&R tunnel ribs and the W-1272 Forward fuselage skin. 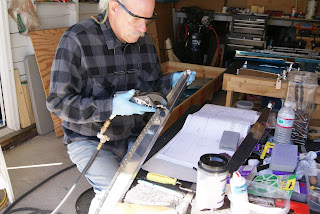 Dimpling one of the F-1248 armrests for #30-120 degree flush rivets with a pneumatic squeezer. 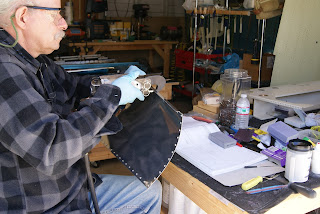 Placing dimples for flush rivets in all of the rivet holes on a F-1271 forward fuselage corner skin. 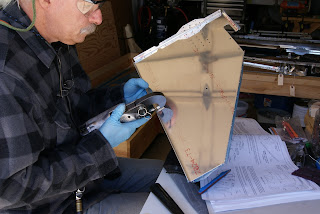 Dimpling the bottom flange of the W-1217A-R tunnel rib for flush rivets. 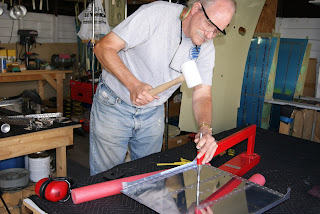 Using Pete’s C-frame outfitted with #30-120 degree dimple dies to
make dimples for flush rivets in the F-1272 forward fuselage skin.
Also would like to paint the fuselage side skins during the coming week aswell,  so the F-1270 side skins were removed from the shipping crate for preparation. Both F-1270 side skins are identical. HOWEVER - a cut needs to be made for the wing spar and depending on which side of the aircraft the skin will be placed, will dictate where the cut will be located. Once the spar cut is made, the skin will become a dedicated left or right F-1270. Van’s gives the builder a precut slot which is either extended fore or aft depending on which side of the RV-12 the skin will be utilized. Originally, the plan was to place the W-1270 skin up on blocks and use a jig saw to make the cut but the skin is rather flexi so since the nibbling tool was already on the bench, decided it was much safer to use it. May have taken a few minutes longer, but it was easy to munch away the aluminum with the nibbler and after a few strokes with a sharp file, the slot was completed.
It has been mentioned in prior posts in the area where Van’s added the F-1270A side skin stiffener plate the plan is to forgo the use of flush rivets. This being the case, the affected area required being marked onto the skin so the F-1270A stiffener plate was laid onto the fuselage skin and an outline was marked as the NDZ … no dimple zone. 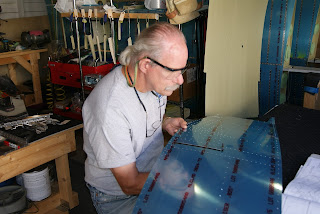 Enlarging the spar slot towards the aft of the skin using a nibbling tool … by doing so, this skin will become the F-1270-R side skin. 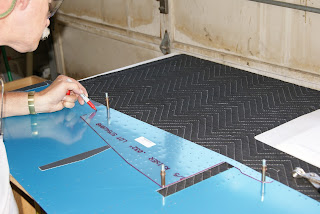 Using a marker to trace the outline of the W-1270A stiffener onto the W-1270 side skin to establish the NDZ.
The now by default left F-1270 skin was placed on the bench to mark the proper cut marks for the spar slot. As I was about to make the marks DOG Aviation received a visit from a neighbor I had not yet met. He jumped at the opportunity to place weight on the F-1270-L skin to prevent it from moving and supervised the drawing of straight lines. 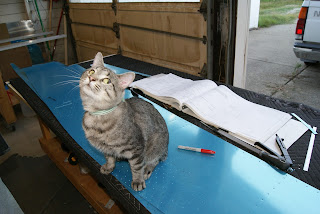 The newly met neighbor eager to lend assistance by keeping the W-1270-L skin pressed tight to the bench. 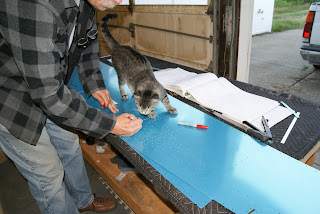 My new friend supervising the drawing of straight spar cutout lines on the F-1270-L side skin.
Posted by John at 8:15 AM