Today’s work session began with the fabrication of the F-1201L bracket from AA6-063 3/4" aluminum stock. The plans called for a two inch piece to be cut from the stock … a band saw was used to cut the material as well as making two additional cuts on one side of the angle which required two sloped edges. After deburring, the opposite side of the angle was measured and center-punched for the drilling of two #30 holes. 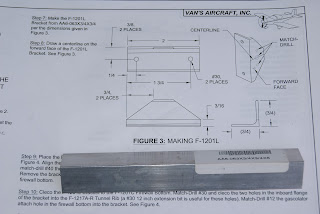 Raw stock to be cut into a two inch piece and made into the bracket shown in the drawing. 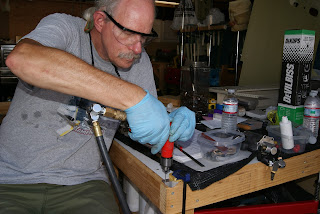 Drilling a small pilot hole at the center-punched location on the F-1201L bracket. 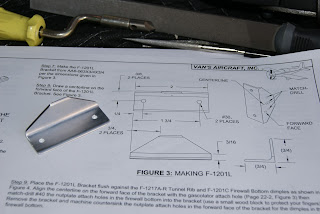 The finished hand crafted F-1201L bracket.
The VA-188 Flo-Scan bracket is the next item that required deburring, countersinking and ultimately match drilled to the F-1272 skin. Apparently  Van’s uses two types of fuel flow meters and the VA-188 bracket has holes pre-punched for both styles. The builder is required to look at the flow meter to determine which type was shipped with the kit and use the appropriate mounting drawing for that meter. The fuel flow meter shipped with the RV-12 kit was the FT-60, so the appropriate drawing was used to determine which nutplate rivet holes to countersink. 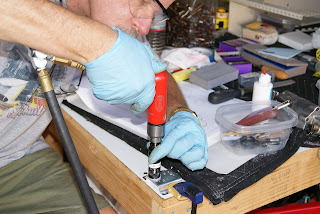 Machine countersinking the nutplate rivet holes on the VA-188 Flo-Scan bracket.
After machine countersinking the correct nutplate rivet holes, the VA-188 bracket was secured onto the F-1272 skin with Clecos and the bracket’s mounting holes were match drilled to the skin. Because the RV-12 is being constructed with flush rivets on outside surfaces, the VA-188 bracket will also have the four mounting holes dimpled for the 120 degree flush rivets. 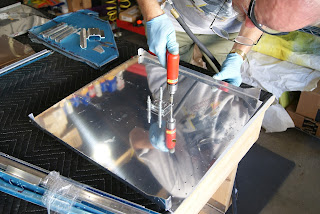 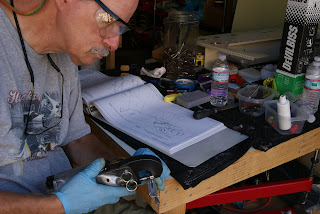 Using the pneumatic squeezer to dimple the four mounting holes on the VA-188 bracket for the 120 degree flush rivets being used on the project.
The last item worked on today was the FF-1204D firewall stiffener. It only required a few strokes with the file and a quick pass on the Scotch-brite wheel to get it nice and smooth. 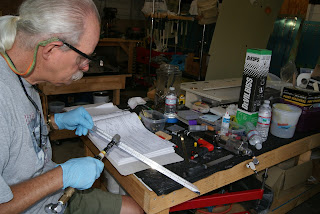 Smoothing the edges of the FF-1204D firewall stiffener with the small Scotch-brite wheel. Only one side has holes, but the shiny aluminum makes it appear as though both sides of the stiffener has holes.
Much to my surprise, preparation of the parts in section 22 parts for primer and top coating (if necessary) was completed today.  Section 23 begins with the fabrication of the longerons and upper fuselage components including the side skins. I know at some point the side skins will be matched drilled to the longerons so just may dimple all the holes except the upper row, prime and paint the interior of the skins. I can then dimple the upper holes after match drilling to the longeron and touch up the primer a bit if necessary.  Doing this will give the Jet-Flex a few weeks to get to full cure and the side skins are a large portion of the interior.  I’m truly worried about the weather and fear if I build now, the opportunity to paint may not present itself later. As much as I hate to say it or think about it, we are approaching the cold season here in the
Posted by John at 9:37 PM