After a little more smoothing of edges on the twelve W-1275 corner skins, all of the rivet holes in the skins were dimpled for the flush rivets being used on the RV-12 project. Because the skins have a curve, the small diameter female dimple die was used so the skin would be distorted as little as possible. The W-1274-L&R corner skins also required dimpling for flush rivets and were dimpled next. 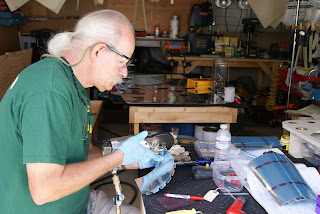 Using the pneumatic squeezer outfitted with #30 120 degree dimple dies to dimple one of the twelve W-1275 corner skins. 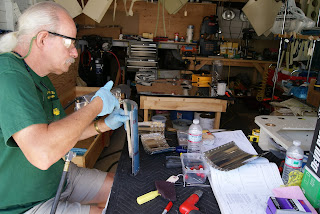 Dimpling one of the W-1274 corner skins for flush rivets.
Looking forward in the plans, there were only two other components that required attention before all the major components in Sections 20 & 21 would be processed. Decided to move forward and finish up the two pieces so all the components will be ready to go. The W-1236 step attach angle came predrilled on one side but required being separated into four pieces. After the four parts were separated, they were deburred and marked for additional cutting.  The plans call for cutting off an edge of the un-drilled side of the angle. The pieces were marked at 1” per the plans, run through the band saw and deburred on the Scotch-Brite wheel. 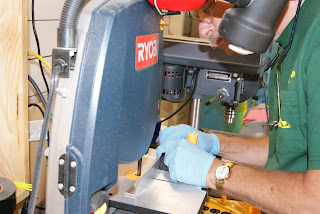 Using the band saw to separate the four W-1236 step attach angles.
The last piece prepared to comple all the components for section 21 was the F-1251-L&R nutplate brackets. Here again, the brackets came as one piece and required separation on the band saw followed by a smoothing on the Scotch-Brite wheel. The plans also called for machine countersinking the #40 rivet holes for the nutplates. 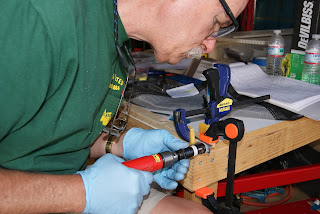 Using the countersink cage outfitted with a #40-100 degree bit to countersink
the nutplate rivet holes in the W-1251-L&R nutplate bracket. 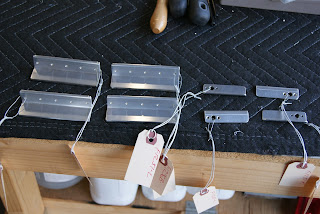 The F-1251-L&R nutplate brackets and the F-1236 step attach angles complete the parts preparation for section 21.
The last batch of parts worked on the last few days will be cleaned with Acetone, scuffed up with Scotch-Brite pads and primed. The weather forecast is for a perfect painting day tomorrow so will try to make the most of it and get things primed early and perhaps also spray a little more Jet-Flex if all goes well. 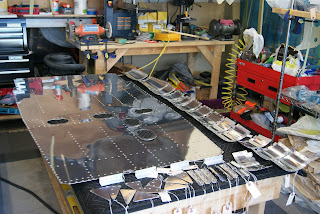 Parts prepared the last few days now ready for the DOG Aviation paint department to cleaning and primer.
Posted by John at 7:28 PM