Another short work session today but good progress was made. AN fittings were installed into the FT-60 FloScan fuel meter and the meter was installed on its mounting bracket. The plans instruct the builder to tighten the aft mounting bolt but leave the forward bolt loose … so apparently something will be attaching to this point later in the build. 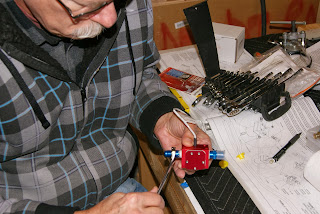 Tightening the AN fitting into the body of the FT-60 FloScan. 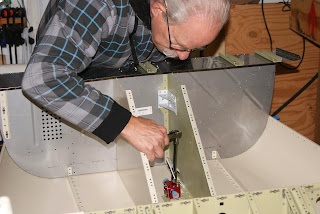 Mounting the FT-60 FloScan fuel meter onto the mounting bracket in the tunnel.
The GAS-5 gascolator was mounted onto the firewall. The AN fitting for the fuel line from the FloScan gets screwed into the back of the gascolator from the cockpit side of the firewall. After reading some comments on the RV-12 forums, elected not to install the safety wire at this time because after flushing the fuel lines and doing some fuel flow measurements the bowl on the gascolator is to be removed and inspected for debris, etc. prior to the first flight so there is no point in installing the safety wire at this point in time. 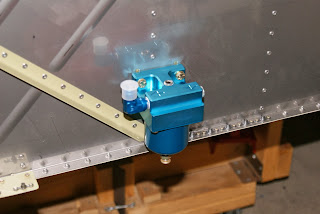 The GAS-5 gascolator mounted onto the firewall.
Work began on fabricating the fuel line between the gascolator and FloScan fuel meter. The first flare was made along with the two bends but ran out of time to make the last flare ... so that will be the first order of business during the next work session.