Not a lot of big progress has been made the last few days on the RV-12 construction due, in large part, to the wait for the replacement F-1236 step angle. However, some small progress was made on components for the fuel system. The fuel valve handle required a little drilling for the on/off lever and mounting onto a bracket. The fuel pump mount also required a couple of nutplates be riveted onto the bracket before it was riveted in position on the fuselage's bottom skin. Work was about to begin bending the fuel lines but a two day bump in temperatures prompted a change in plans. 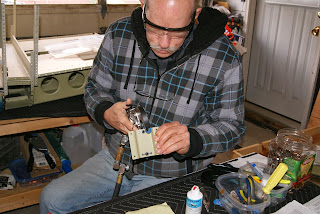 Riveting nutplates onto the F-1048F fuel pump mount with the pneumatic squeezer.

When hangar 45 was secured for DOG Aviation, one of the topics of discussion with friends Bernie and Mike regarded how best to conduct winter operations in the hangar without freezing in the cold. Bernie came up with a great suggestion of hanging tarps to separate the rear portion of the hangar from the front portion of the hangar … thus creating a smaller shop area to heat. Mike was then quick to point out the way the hangars are laid out, that portion of the hangar is surrounded by interior walls which should help keep the heat inside better than if they were outside walls.

With the fuselage quickly growing in size, it won’t be long before it’s necessary to move the RV-12 project to DOG Aviation’s hangar. Knowing that, thought it would be best to finish up preparations for the move into the hangar ASAP. So taking advantage of a two day heat wave (50's&60's), Mike and I rented a portable scissor lift to install two high intensity T5 fluorescent light fixtures in Mike’s hangar and a second high intensity T5 fluorescent light fixture in the DOG Aviation hangar.  While lending assistance hanging the tarps, Mike came up with two suggestions that proved to work out quite well. The first suggestion that worked out great was hanging the tarps from the side hole in the beam clamps using bridle rings as opposed to hanging the tarps from the bottom hole … this kept the tarps tight alongside the beam and closed what would have otherwise been at least a 4” gap between the top of the tarps and the bottom of the beams. The second suggestion Mike made that worked out great was to tie a rope to the lower outer edges of the tarps so the tarps could be pulled up using pulleys much like a theater curtain … worked great and looks good too. 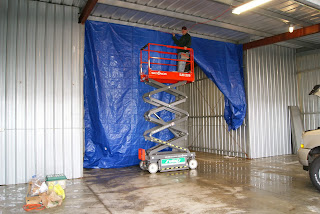 On the SkyJack scissor lift repositioning the power cord to the newly installed T5 high output fluorescent light fixture after using Mike’s suggestion to reposition the tarps to obtain a tighter fit. 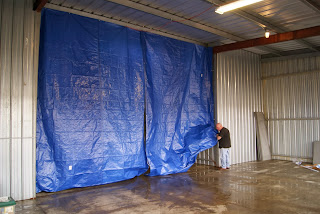 Mike straightening out the tarp for the stage curtain opening test. 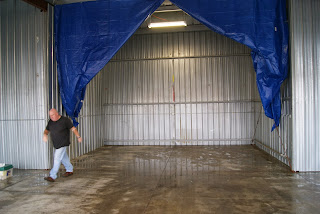 Mike walking away after opening the curtain in preparation for act 2 scene 1 of “Building An RV-12 At Hangar 45 - Winter Operations”.
Astute photo viewers may have noticed how wet the floor is. This came as quite a surprise … when the hangar door was opened, the air and floor temperature was such the humidity in the air caused the entire floor to get wet almost instantly. Mike said this phenomenon only happens a couple of times a year when the temperatures are just right. Hope Mike's large fan dries the floor before the now plummeting temperatures turn the hangar floor into an ice skating rink for the entire winter. 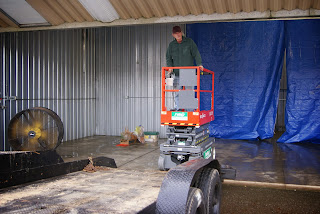 Have to say the SkyJack scissor lift did a splendid job and made all the light hanging, beam clamp/bridle ring instillation and tarp hanging a piece of cake. Sure beat working on a ladder. Kind of hate to see it go back onto the trailer … it was fun to operate.
Posted by John at 9:11 PM