The replacement part for the F-1236A-L&R step angles that were trimmed in error arrived from Van’s few days ago. The recent cold temperatures have been more conducive for staying inside and reading a good book than holding onto cold aluminum and tools. So for the last few days, there has not been a lot of enthusiasm to get into the cold soaked shop to work on the RV-12.  Getting cabin fever, decided to bundle up, toughen up and get some forward progress going in the shop.

The replacement F-1236 angle was marked and quickly passed through the band saw to create the two replacement F-1236A-L&R step angles. After a little dressing on the Scotch-Brite wheel, all the step angles were Clecoed onto the F-1212 step ribs and match drilled to the holes on the F-1202F bulkhead. 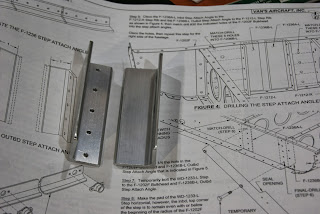 Replacement F-1236A-L&R step angles ... note the un-drilled side is wider than the side with the predrilled holes … quite different than the way I originally cut the parts. 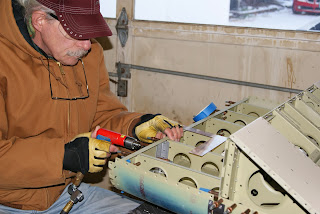 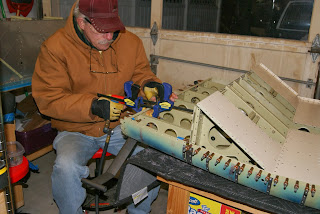 The left WD-1233 step clamped in position and the upper ¼" bolt hole is used as a guide to match drill the F-1236A step angle.

After match drilling the left WD-1233 step, the same procedure was used to match drill the WD-1233 step for the right side of the fuselage. By this time my finger tips were beginning to get numb so decided to call it quits for the evening.
Posted by John at 8:03 PM