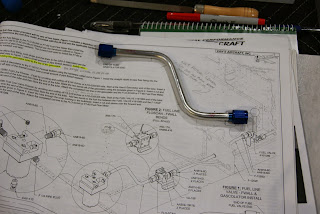 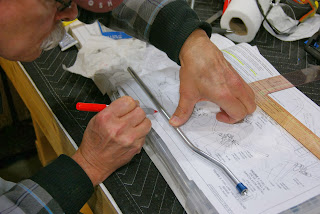 Marking the point where the bends required for the FT-60 fuel flow meter need to begin. 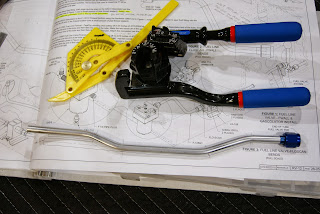 The additional two bends required for the FT-60 fuel flow meter completed … the line is now ready to feed through the F-1202F bulkhead grommet for final cutting and flaring.

Access for cutting the tubing with the small Rigid tubing cutter was fine. However, creating the flare at the fuel flow meter’s aft fitting was a little tight. Using the bulbous Parker flaring tool between the tunnel ribs was … challenging, but doable. The needed room was garnered by pulling the fuel line forward so the bend was at the bulkhead grommet, then lifting up on the line. 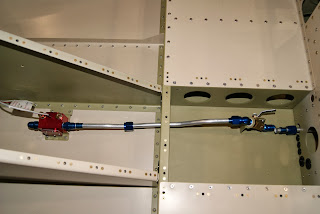 With the exception of the fuel tank drain modification previously mentioned in another post, the supply fuel lines to the firewall are now completed. The fuel tank will need to be installed so exact measurements can be obtained for cutting and flaring the fuel line that will now go onto the T as opposed to making a 90 degree turn up to the bottom of the fuel tank. Doing this modification has created a small issue in obtaining proper measurements for the placement of the return fuel line … solved later in the post, with accompanying small rant.

The RV-12 employs a circulating fuel system where the return fuel line to the fuel tank is a smaller diameter than the supply line … 1/4" line as opposed to 3/8" line. The plans instruct the builder to begin crafting the aft portion of return fuel line between the fuel tank and the AN837-4D fitting installed in the F-1204D bulkhead ... beginning at the fuel tank fitting. The return line is supposed to run aft and parallel to the previously built fuel supply line. However, because of the planned modification, the main fuel line will not be in the same position … so decided it would be easier to run the return line on top on top of  the supply line eliminating a potential clearance issue where the lines will cross. Having a plan of attack in mind, the aft return fuel line was formed per the drawings but dimensioned so it will reside on top of the already built supply fuel line. 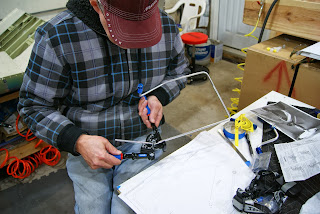 Placing the last bend in the return fuel line … a small hand adjustment will be required to align the line to the AN837-4D bulkhead fitting. 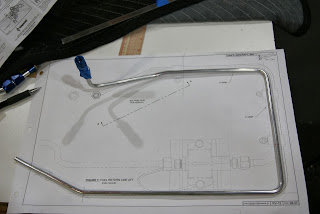 Completed aft fuel return line which will be running on top of the supply line - opposed to behind it.

Now for the rant. All and all the drawings from Van’s are great, but occasionally it is nice to have more detail than that given. Case in point, below is a photo of the plans that show measurements from the bottom of the baggage floor to the top of the fuel line AN fittings and a measurement from the supply fuel line to the return line taken as a side view. Which is fine for the spacing between the fuel lines but it does not help much with the overall fore and aft positioning of the fuel lines within the large oval hole in the right baggage floor. Bear in mind, you can’t actually see the lines and ribs shown in the drawing because the baggage floor is in the way … and the rivet holes shown in the background are about 15 inches or so away. Because of the fuel drain modification being made, there is no supply fuel line at this time to measure from. One would think for alignment purposes there would be a top view detail showing the exact positioning of the two lines within the large hole in the baggage floor along with a couple of accompanying measurements. Even if no fuel line modifications were made, based on the supplied drawing, without a fuel tank in position the exact positioning of the lines is mostly guess work. Decided to run strings from the rivet holes shown in the drawing below … which, when used as a reference point, should help determining the approximate location for the return fuel line fitting within the oval cutout on the right baggage floor. 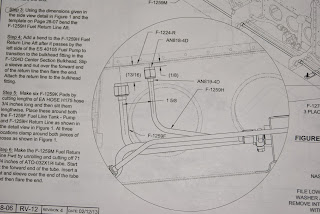 Side view drawing of the fuel lines below the fuel tank with no references made to the bulkhead or positioning within the large oval hole in the right baggage floor. 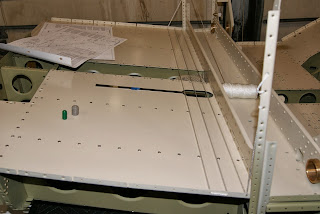 String run between the rivet holes to be used as a positioning reference for the return fuel line based on previous drawing photo. 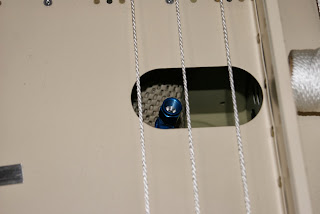 Top view of the hole with strings being used as position locaters … return line is NOT properly positioned yet. It would have been far easier if there was a drawing from this perspective with a measurement or two.

After running the string, decided to call it quits for the day so will make the necessary adjustments, clamp the two fuel lines together with the spacers provided and make the final cut and flare for the AN fitting at the F-1204D bulkhead during the next work session.
Posted by John at 9:10 AM