Taking a short break from all the festivities, a short work session was squeezed into the day’s activities. Work was completed on the fuel line between the fuel pump and the fuel on/off valve.  Interestingly, all the effort to make sure the fuel line was nice and straight was all for not … because during installation, between measuring, cutting the excess line, deburring and flaring, it required bending the fuel line several times. 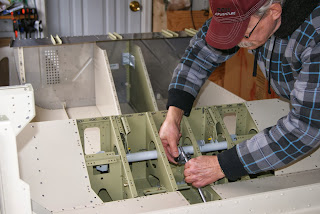 Cutting off the excess fuel line with a small tubing cutter. 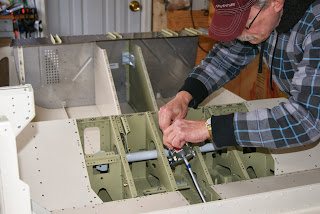 Using the Parker flaring tool to flare the forward end of the fuel line that attaches to the fuel on/off valve.

The completed fuel line was fished back through the F-1203A bulkhead so the finished length could be verified to be useable. The AN fittings were not tightened at either end of the line at this point in time because the DOG Aviation procurement department dropped the ball and forgot to order fuel lube. Fuel lube is suggested in section 5 of the plans to be placed onto the fuel line AN fittings prior to tightening the nut that compresses the flare to the AN fitting. Also would like to torque the fittings but that will require obtaining a crows foot wrench set which Santa forgot to deliver. Rule of thumb is to tighten the nut until the fitting cinches up and turn the nut an additional quarter turn. However, AN fittings do have a torque specification so would like to know the fitting is tightened enough to be in the middle of that range. 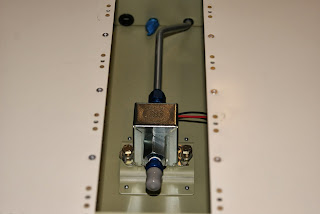 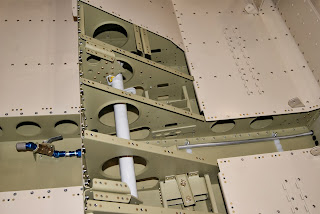 Decided to move on and begin working on the next portion of the fuel system which involves the gascolator. The gascolator  comes out of the box with a multitude of holes that receive plugs and AN fittings. Had just enough time to finish up installing all the parts onto the gascolator, but did not have the time to safety wire the screws holding the bowl onto the main body. That will be the first order of business during the next work session. 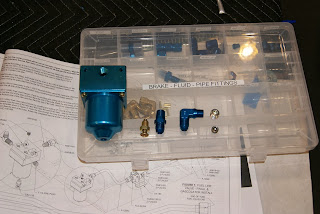 Gascolator plus necessary fittings and plugs that will screw into it. 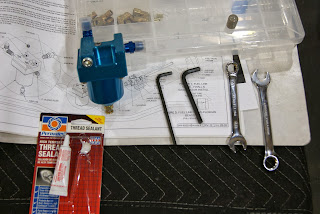 Completed gascolator ready for mounting after safety wire is installed on the screws holding the bowl onto the main body.
Posted by John at 5:56 AM