After a morning trip in Mike’s airplane to Latrobe PA and back, the latter part of the afternoon was spent working on the RV-12 project. There were a couple of lose ends to finish up sections 21 and 22.  The last step in section 21 involved placing 6 screws and nuts in the tunnel area which will be used to mount standoffs for the fuel lines. A little blue Loctite was used to insure the screws don’t back out when the standoffs are secured with nuts.

To complete the mating of the forward lower fuselage assembly with the fuselage mid-section, the last few remaining rivets securing the F-1271 corner skin onto the F-1274 skins were set today ...  after Mike helped out with rolling the fuselage assembly off its side. There were six rivets remaining to install and once they were installed, it marked the completion of section 22 of the RV-12 assembly instructions. 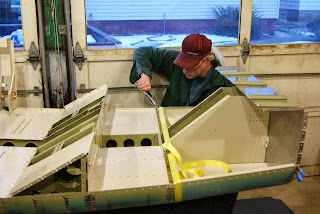 Using the hand rivet puller to set the last flush rivet completing the mating of the forward lower fuselage assembly to the fuselage mid-section. 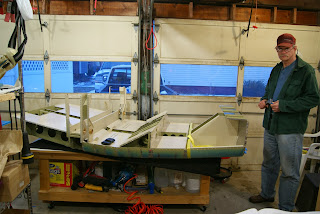 Completed mating of the forward lower fuselage assembly with the fuselage’s mid-section.

Yet another detour. Based on the suggestions of other builders who feel installing the fuel system plumbing is much easier to accomplish prior to installing the fuselage side skins, rather than continuing into section 23, a quick detour to section 28 is being made. Makes sense to me … do things now while access is good. Section 28 is basically the fuselage’s fuel system and work began with prepping the electric fuel pump and fuel on/off valve with fittings. After installing fittings, the fuel on/off valve is riveted onto a bracket which then mounts onto the fuselage’s bottom skin. 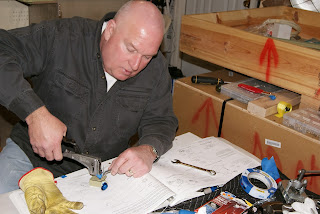 With any luck tomorrow will begin with bending and flaring tubing for the fuel lines.
Posted by John at 9:09 PM