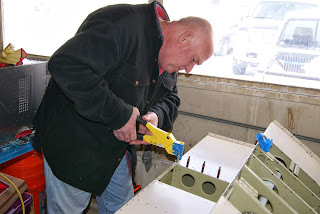 Mike using the hand rivet puller to rivet a nutplate on the forward edge of the F-1213-R step floor with flush pop rivets.

Once the riveting of the F-1213-R step floor was completed, the shop was prepared for the mating of the fuselage sections.  We decided there would be more room to work if the fuselage assembly were given a 180 degree turn before we attempted to mate the two sections together. This turned out to be a good idea and made mating the two assemblies easier.

The forward fuselage assembly was fairly easy to mate onto the mid fuselage section … especially because of Mike’s assistance. The dimples in the skins for the flush rivets being used on the RV-12 project made the job a little more challenging than it would normally be. The parts had to be slowly worked together while making sure that the forward fuselage skins overlapped the F-1276 bottom and F-1274 corner skins. 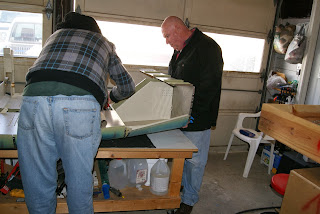 After the two fuselage sections were mated, the sections were carefully aligned and then Clecos were placed in all the overlapping rivet holes on the bottom and sides. Following a tip from Joe, a builder in , the vertical rivets were set first before riveting any of the bottom or corner skins. This was GOOD ADVICE because there would have been no room at a few rivet locations to get a rivet puller positioned properly had rivets already been placed into the bottom skin first. After the vertical rivets were set, the whole fuselage assembly was rolled over onto it’s side to make riveting easier. 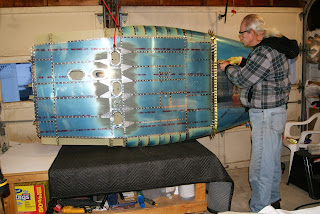 Placing Clecos into the overlapping area of the forward and mid-fuselage sections. 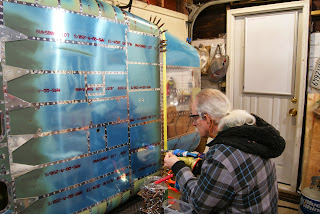 Riveting the overlapping areas of the forward and mid-fuselage assemblies with flush pop rivets almost completed … making the two assemblies one.