The F-1202F bulkhead required a little finish up work in the form of riveting the F-1202F bulkhead onto the F-1236 step angles and the F-1251 nut plate brackets. Access for the pneumatic squeezer was good so the top three rivets received AN470AD4-6 rivets and the rivet holes the squeezer could not reach received either LP4-3 or LP4-4 pop rivets depending on how many layers of material there was for the rivets to go through.

At this point in time, the F-1202F bulkhead is NOT riveted onto the F-1276 bottom skin. However, it is riveted onto both the F-1274 fuselage corner skins ... so the flush rivets being used on the RV-12 project were used in place of LP4-3 rivets. During this step of construction a small oversight was caught and corrected. The rivets going into the F-1274 were being partially set with the hand rivet puller and were going to be finalized with the pneumatic rivet puller. After partially setting the six rivets on the left F-1274 corner skin it was discovered the blue plastic protective film was not removed from the rivet line. So all six rivets required being removed so the blue film could be pealed away from the rivet line. A good way to sour a good mood … DUH!!! After the blue film was removed from the rivet line, the F-1274 corner skin to F-1202F bulkhead riveting was completed.

Next the F-1213-L&R step floors were rounded up. All of the dimpling and installing of nutplates was done previously, so all that was left to do was to Cleco the F-1213 step floors in place and begin riveting. Blue tape was placed on the step floors to protect the paint from becoming scratched by the Clecos, Cleco pliers, or the hand rivet puller while riveting the rear flange of the F-1213 step floors onto the F-1203 bulkhead. 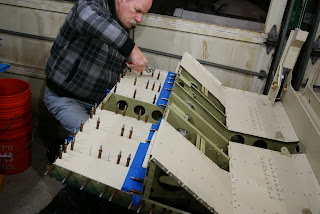 Once the F-1213 step floors were properly aligned, decided to rivet the rear flange onto the F-1203 bulkhead first. There is not much clearance for riveting the rear flanges of the F-1213 step floors onto the bulkhead. The Clecos rested on the painted floor and the close quarter hand rivet puller just barely had enough clearance to get onto the rivets without needing to use the trick of bending the mandrel and using an AEX wedge or the offset tool. 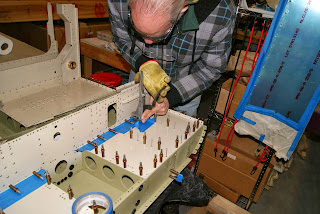 Using the close quarter hand rivet puller to rivet the rear flange of the F-1213L step floor onto the RV-12’s F-1203 bulkhead.

After the rear flange of the F-1213’s was riveted in place, the remaining rivets were set with the pneumatic rivet puller. All of the rivets used were LP4-3 with the exception of the inboard edge of the F-1213 which receives nine flush rivets where the center tunnel inspection panel will sit when it is finally installed at some point way down the road. 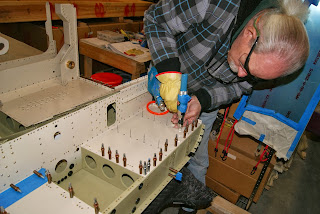 Using the pneumatic rivet puller to rivet the F-1213 step floor onto the F-1212 step ribs. 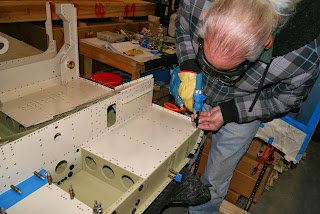 Setting the last rivet in the F-1213L step floor. 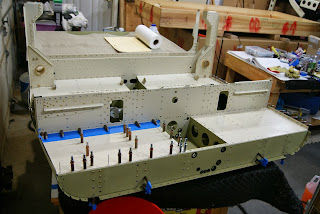