Taking full advantage of the one day 30 degree heat wave last Friday and the accompanying calm winds, a small batch of Akzo primer was mixed for the airbrush so the two replacement F-1236A step angles could be primed. In addition to priming the two F-1236A step angles, some additional pieces which either had the primer sprayed a little lighter than optimum or had been scratched were touched up as well. Mike’s two burner heater was doing a swell job of keeping the shop well over 60 degrees so the epoxy primer  was able to cure correctly. The parts were suspended from bungee cords in front of the heater to absorb the warmth radiating from the heater. 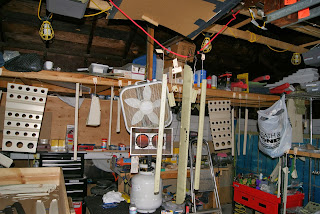 F-1236A step ribs and a few other parts suspended from bungee cords in front of the heater to absorb the radiating warmth.

After the primer on the W-1236A step angles had a couple of days to cure, all the F-1236 step angles were secured onto the F-1212 step ribs with Clecos and then riveted in place. 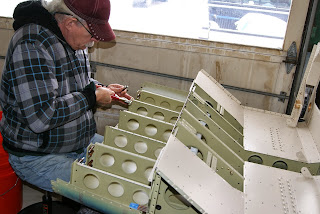 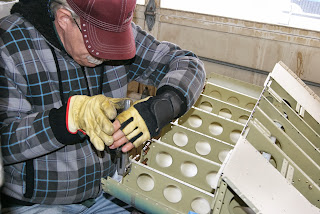 The F-1202F bulkhead received four nutplates then the bulkhead was Clecoed onto the F-1212 step ribs for riveting.  The pneumatic squeezer was used to set AN470AD4-4 solid rivets in the top two rows of rivets and the remaining rivet holes that the squeezer could not reach received LP4-3 rivets with the exception of the two flush rivets in the corners called out in the plans. There are also four rivet holes the plans instruct the builder to skip, so they were marked with blue tape. 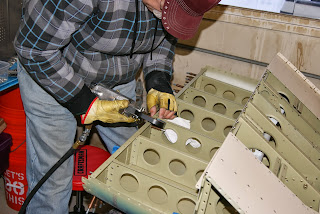 Using the pneumatic squeezer to set AN470AD4-4 solid rivets in the upper two rows of rivets securing the F-1202F bulkhead onto the F-1212 step ribs. 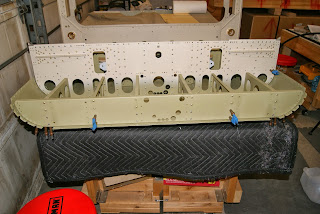 Riveting of the F-1202F bulkhead onto the F-1212 step ribs completed … blue tape on Clecos denotes holes not riveted at this time.
Posted by John at 9:22 PM