Behind the scenes progress has been made on the RV-12 in that more miscellaneous  parts have been primed and the hinges for the seats were painted with JetFlex between rain storms. Also installed an additional wire into the roll bar assembly which will be used to support the new canopy latch modification recently released by Van’s which adds a micro switch onto the canopy latch to verify the latch is fully engaged.

As work began on the left blue electrical connector by stripping wires it dawned on me I almost forgot about wiring in the strobe light filter. Humm, … where is that filter? Not having seen the filter for almost two years, the search began … the filter turned out to be quite elusive, but was finally located. 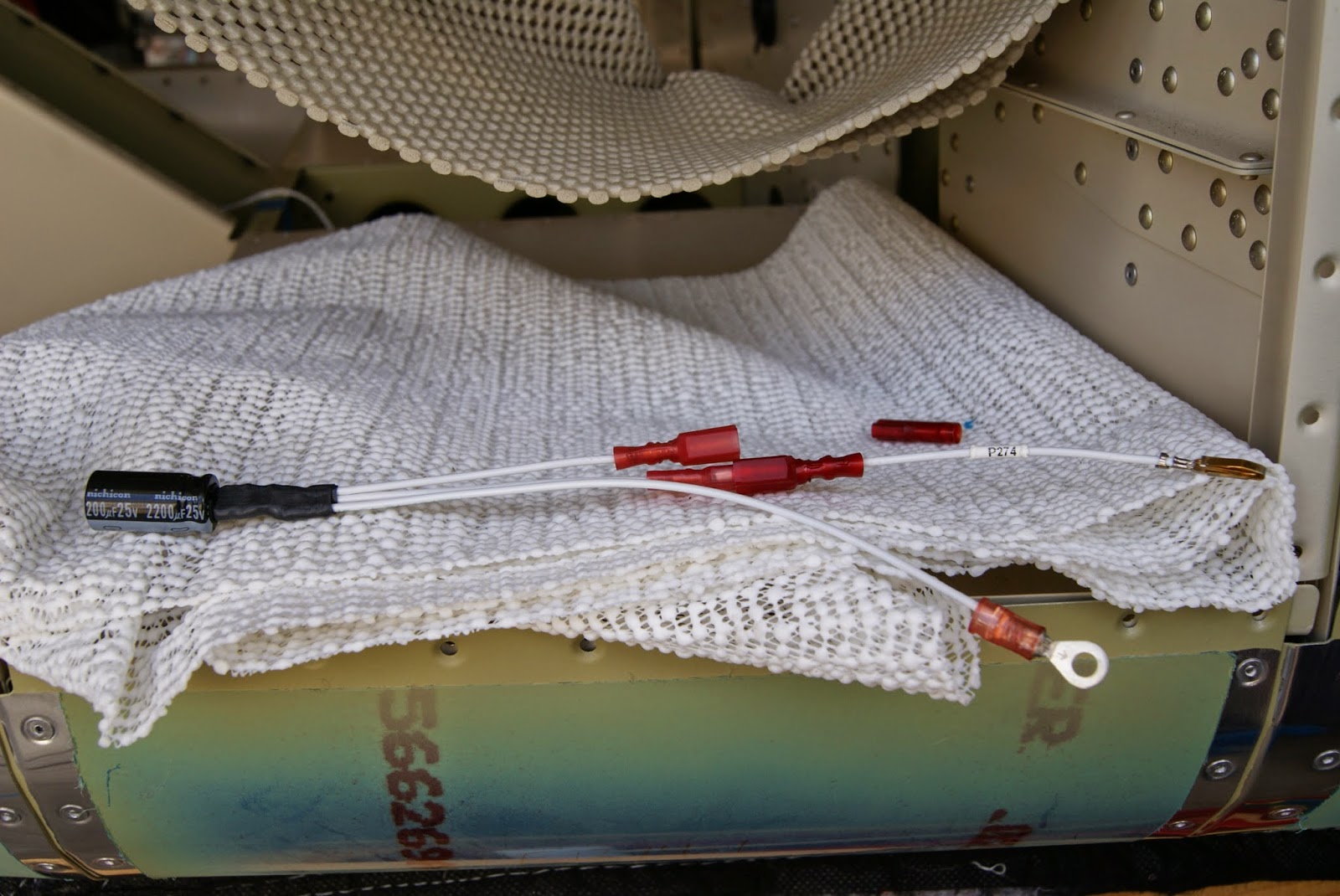 I was not happy with the suggested Van’s method of installing the noise filter by way of folding the wires onto themselves and using wire ties to secure the filter to other wires. Some of those wires are audio wires and ideally the noise filter should not be tie wrapped with audio wires. This created a little logistics issue in the mounting which was finally overcome in what I believe is a workable solution by tie wrapping the filter capacitor to a standoff made of vinyl tubing. 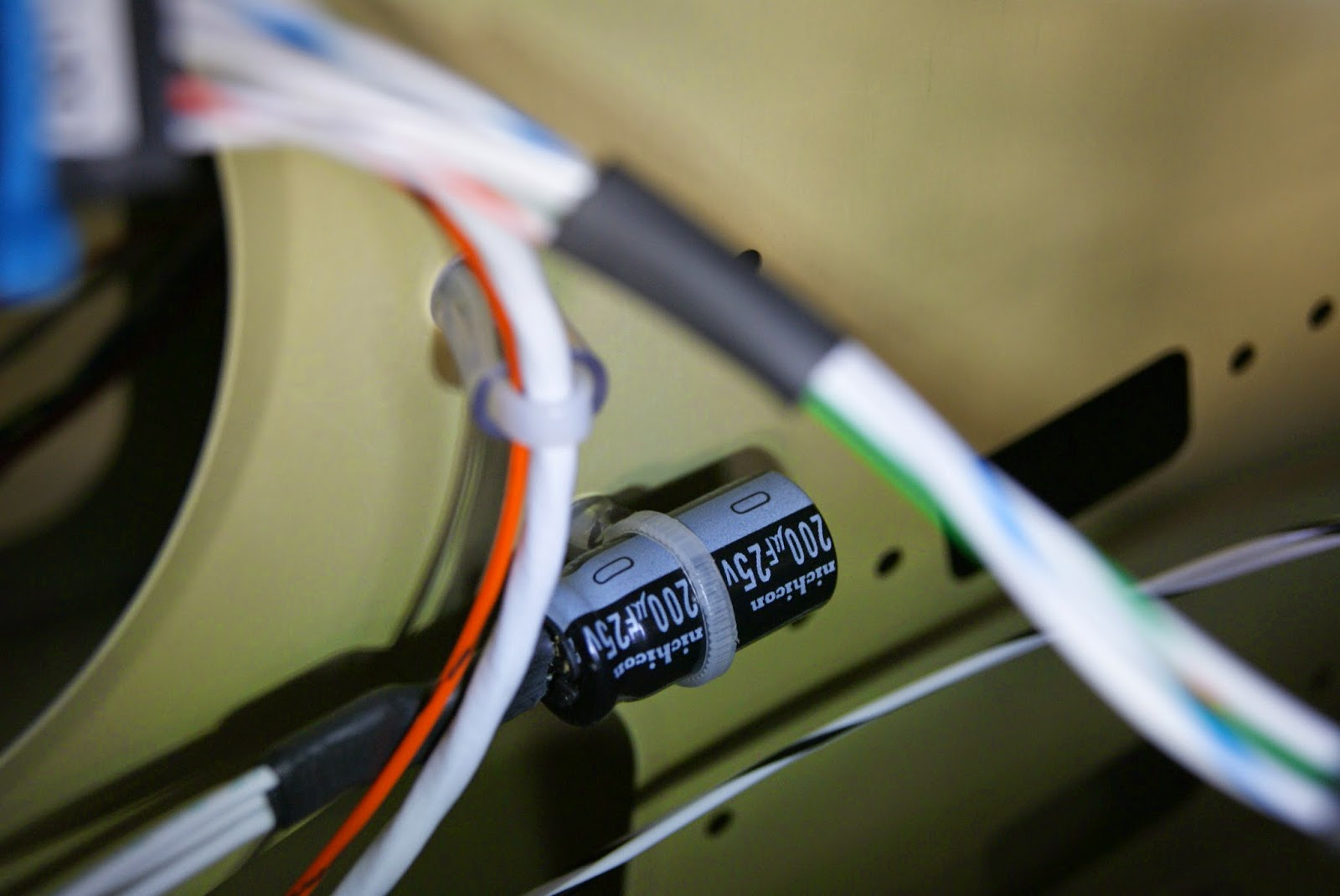 Strobe power noise filter placed on a piece of vinyl tubing used as a standoff and tie wrapped onto an existing hole in the seat rib.

A small piece of vinyl tubing was cut to make a standoff and a small wire tie was threaded through an existing small hole in the seat rib, through the vinyl tubing, around the filter capacitor, back through the vinyl tube and seat rib hole. It sounds easy, but was an exercise in patience … however it turned out nice. A #19 hole was drilled in the seat rib and the primer removed so the ground wire would make good contact with the metal to establish a good ground.  After the filter was mounted satisfactorily, work began on prepping the wires for the left fuselage blue electrical connector. Savvy viewers may notice the filter capacitor wires still cross the audio wires … but this should not pose an issue because the white audio cable is a shielded cable and the filter capacitor wires cross it at a 90 degrees … which is ideal for not inducing unwanted noise.

Wiring the left fuselage blue electrical connector was uneventful and the wiring was accomplished using the same pin wiring as posted in the chart from the previous post. 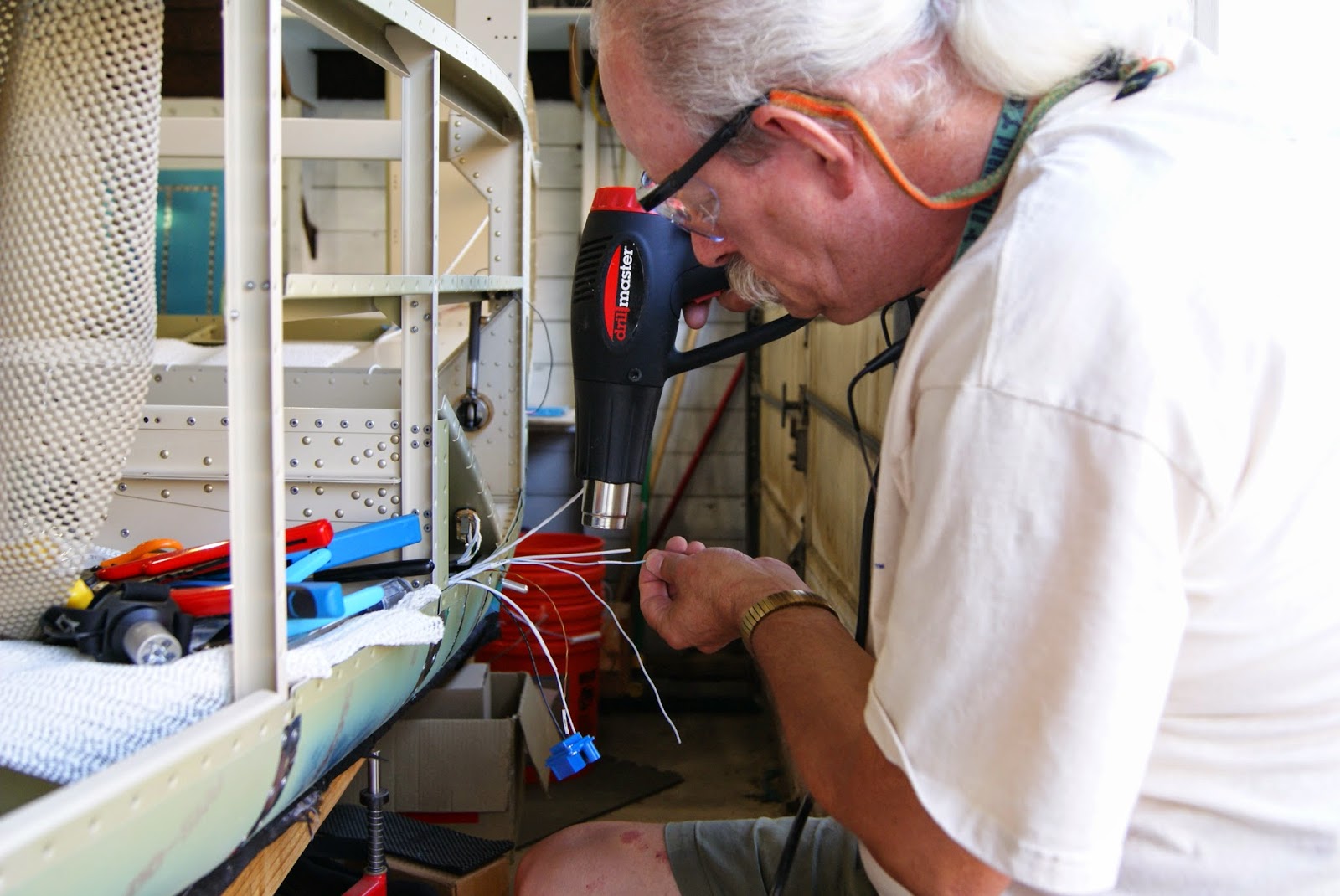 Using the heat gun to shrink a heat shrink label on a wire. 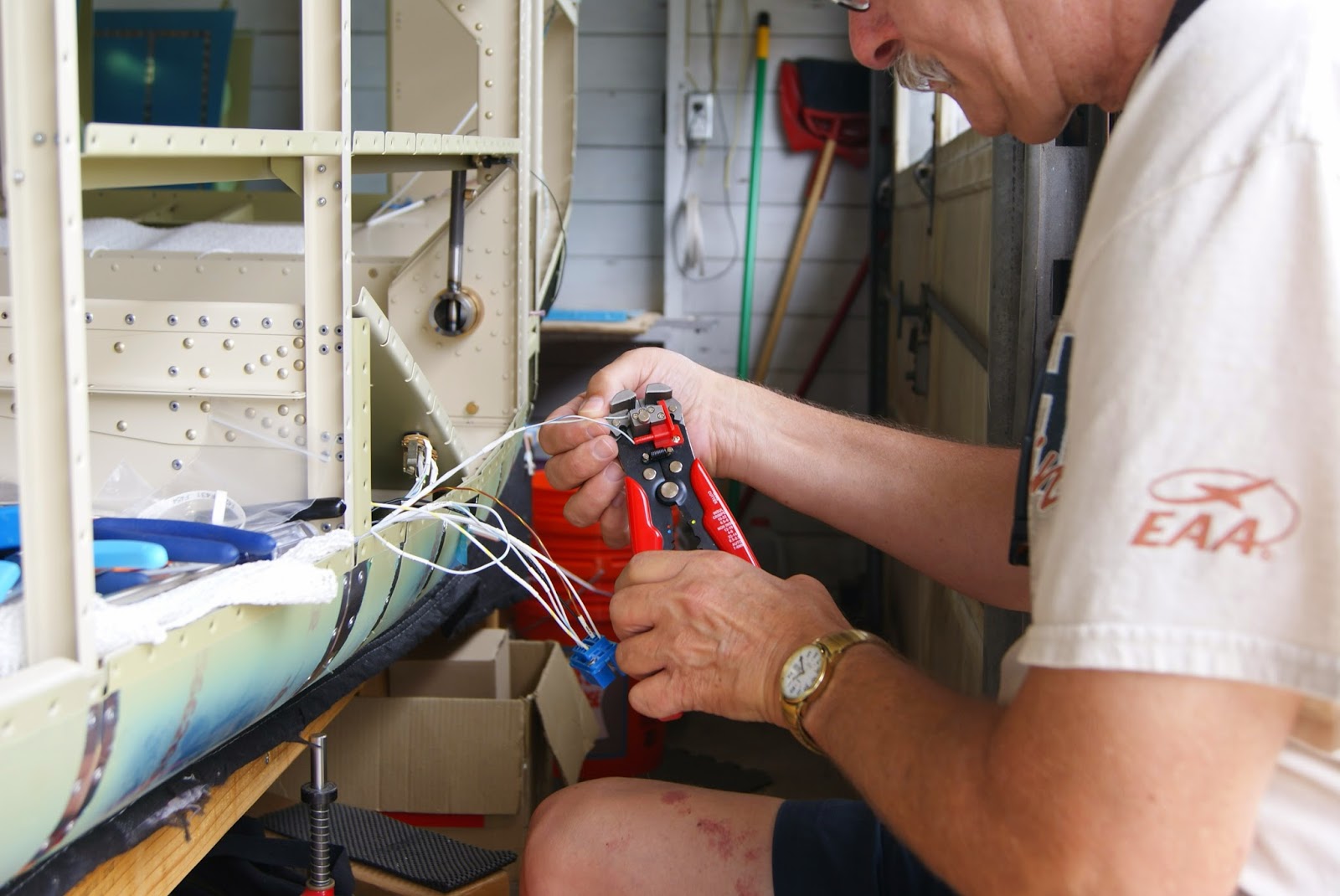 Stripping wires for the open barrel connector pins to be crimped onto the wires. 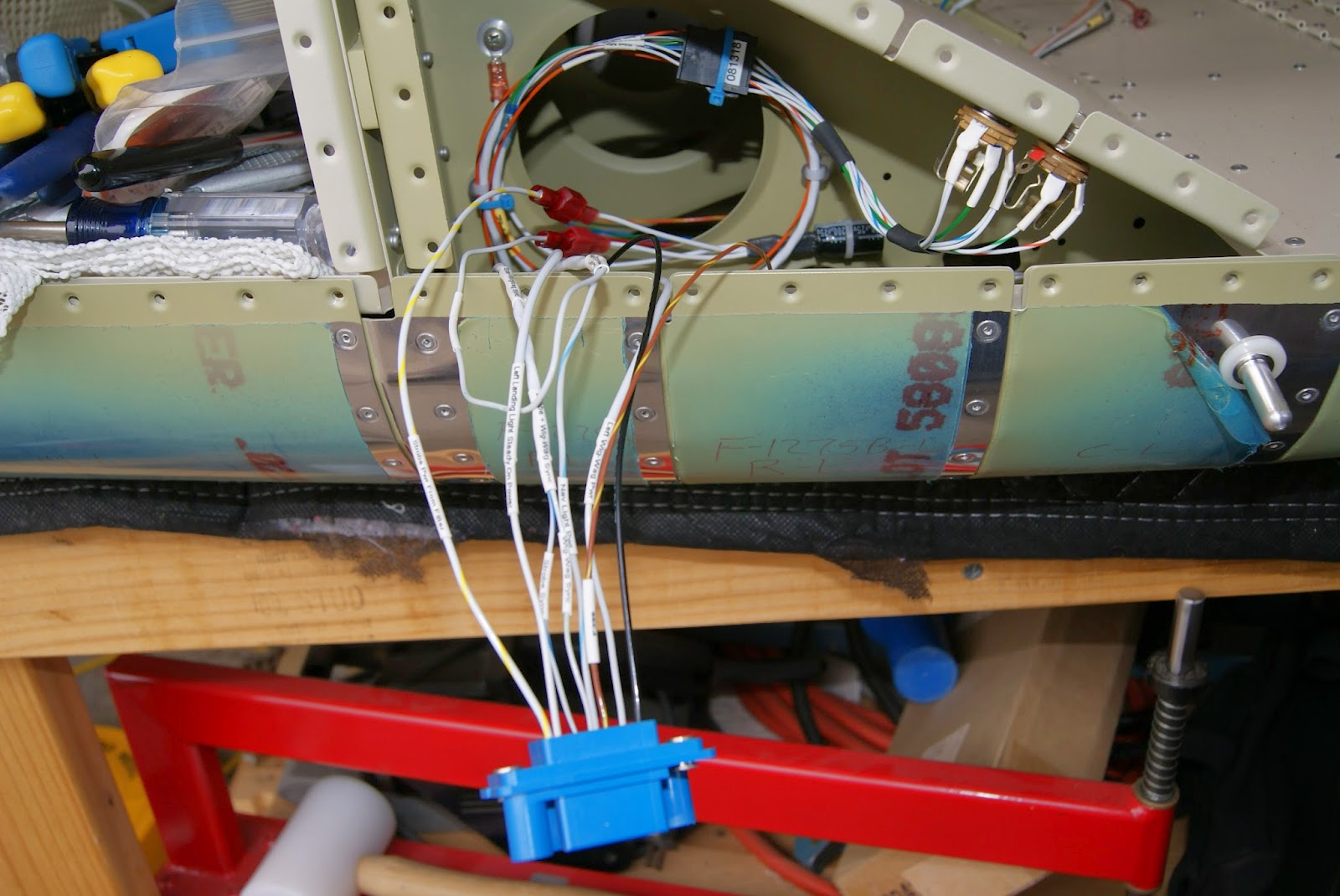