While waiting for warmer temperatures to prime the seat back hinges and some other goodies that were overlooked, decided to move forward and begin wiring up the blue fuselage electrical connector on the right side of the fuselage.

Before documenting the wiring of the fuselage electrical connectors, RV-12 builders using this Blog as reference take note: … deviations in the wiring have been made from Van’s plans. Because the DOG Aviation RV-12 is being built as E-AB and not E-LSA, the decision was made to use shielded cable for wiring the nav/strobe light circuits. This carried over into the landing light power circuits for the two landing lights because of not being sure if the wig wag mode would create electrical noise. Since I already had the shielded cable, decided to go ahead and use it from the instrument panel connectors all the way to the fuselage electrical connectors. The wings already have sheilded wires installed.

The right fuselage connector wiring uses the same pins on the electrical connector as Van’s documentation shows for wiring the connector when installing the lighting kit for the right wing. Because the DOG Aviation RV-12 has an additional landing light installed in the left wing for utilizing the wig wag feature built into the AeroLED's lights, there is the addition of a wire on pin 7. The additional wire on pin 7 will be used to connect the right landing light’s master out to the left landing light’s slave in … this will create a synchronizing of the lights when in the wig wag mode rather than having the lights pulsing randomly. 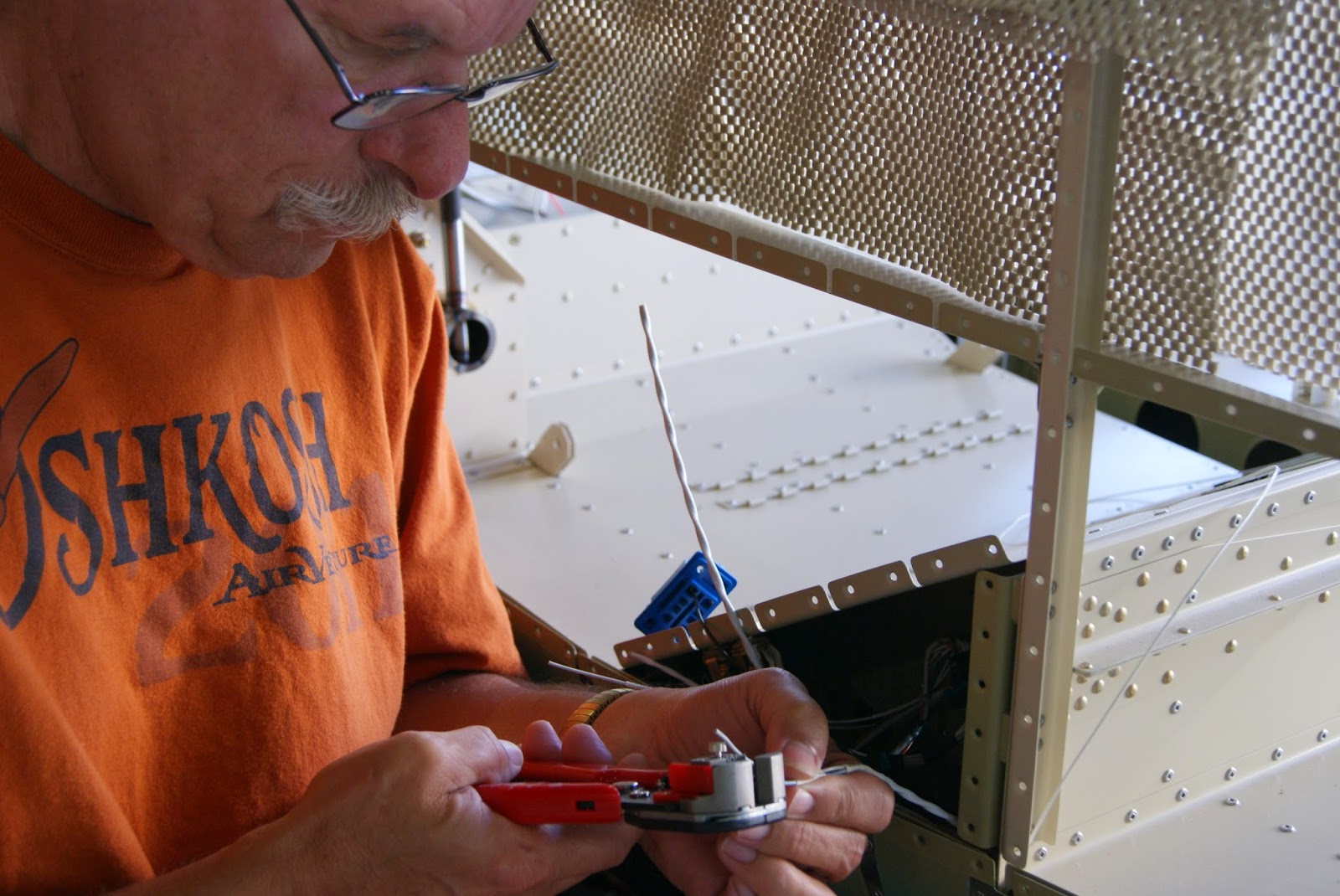 Using the wire strippers to strip insulation off the wires for crimping. 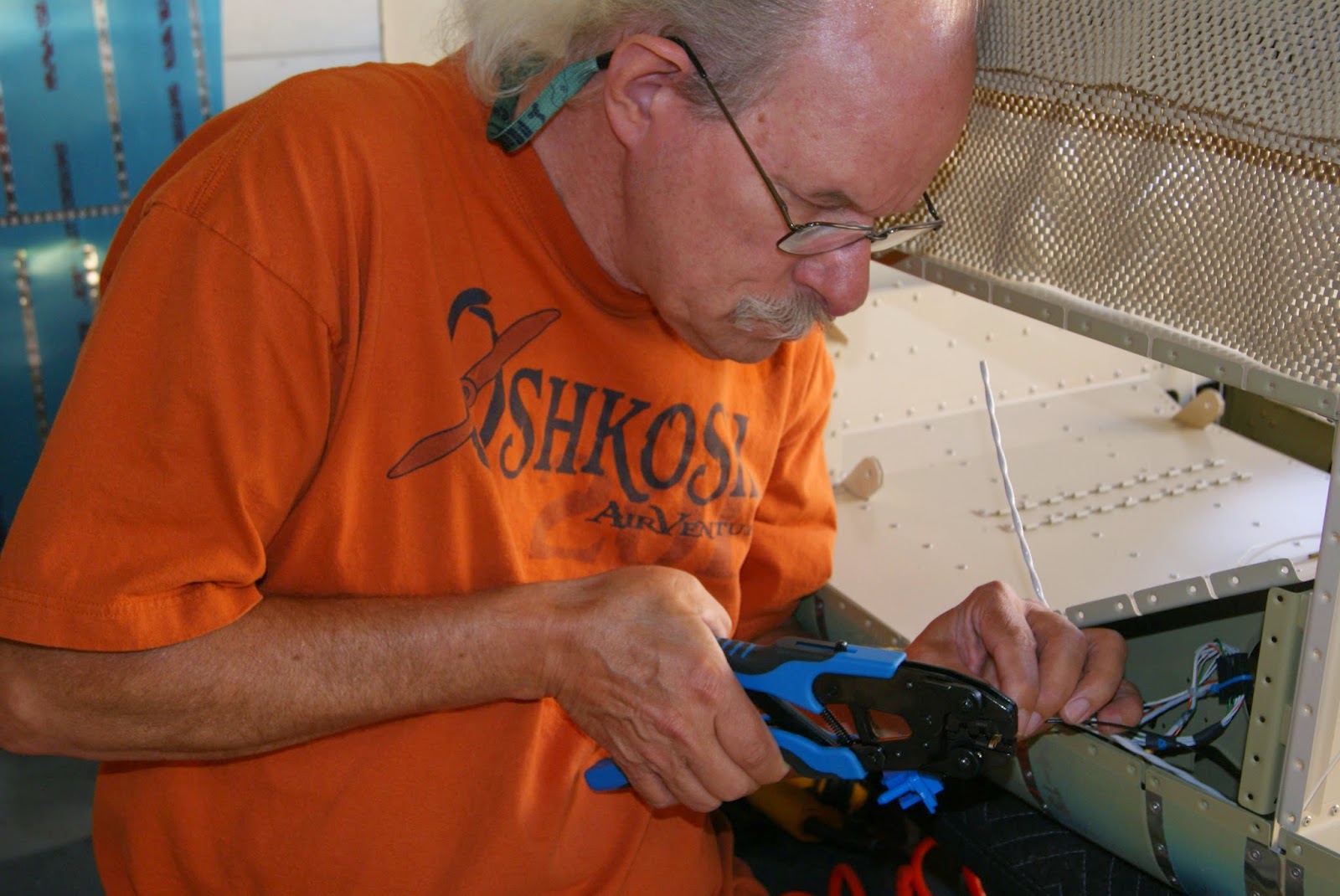 Crimping the blue electrical connector’s pins onto the wires using the crimping tool outfitted with dies made for 18-22 gauge open barrel connector pins.

For those interested in the fuselage wiring layout, two conductor 18 gauge shielded wires were run from the Options connector at the instrument panel to the blue connector on the right side for both the navigation & strobe lighting power and the landing light & pulse (wig-wag) power runs. The navigation & strobe power runs were tapped into just aft of the F-1203A bulkhead so nav and strobe power could be run to the left and right fuselage electrical connectors from the one source. This is also where the shields on all the cables were grounded as well.

The last wires that need to be discussed are the sync wires. Two conductor 22 gauge shielded wire was run from the pins 3 and 7 on the right electrical connector directly to pins 3 and 7 on the left electrical connector. These are for strobe light synchronization and wig wag synchronization. These are data leads and do not require the use of heavier wire. As previously mentioned, the wig wag sync is run from the right light’s master out to the left light's slave in. It could also go from the left master out to the right slave in but I chose to use the right light as a master since it is typically the only light offered in the Van’s lighting kit. Long ago I mentioned this when documenting plans to go with a second landing light but I’ll mention it again. When power is applied the AeroLED’s landing light’s pulse lead, it will cause the landing light to pulse … regardless of power being applied to the landing light’s steady on lead or not. 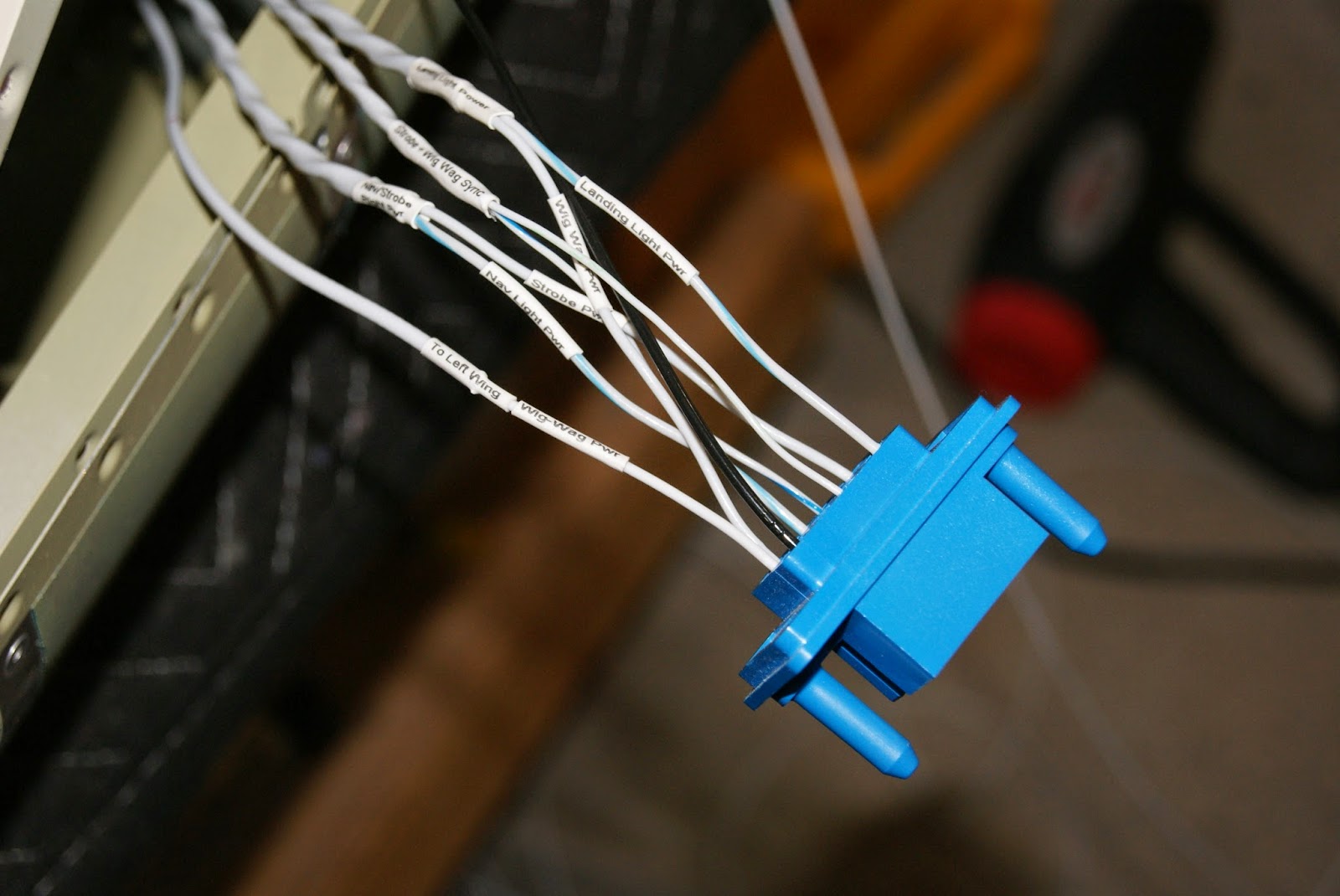 Pin 3 Wig Wag Sync
Pin 4 Landing light steady on power
Pin 5 Pulse or Wig Wag Power
Pin 6 Navigation Lights Power
Pin 7 Strobe Synchronization
Pin 8 Strobe Light Power
Hopefully I can get some priming in today and finish up on the electrical connector on the left side of the fuselage.
Posted by John at 10:03 AM