It has taken a little longer to get the navigation and strobe lighting instillation completed  than expected (mostly due to not being at the hangar) but Thursday it finally all came together … although there was a small bump in the road I’ll mention later. During the last couple of short work sessions the wires were stripped back and male .062 Molex connector pins were crimped onto the wires then placed into the Molex connector body. Because the DOG Aviation RV-12 is using shielded cable for the nav/strobe power leads (which is a modification), the cable for each wing tip light was stripped back and the shields were connected to the ground wires that attach onto the outer wing tip skin ... this was accomplished by using heat shrink solder sleeves and removing a band of insulation from the ground wire so the solder sleeve could make contact when heat was applied to shrink and melt the sleeve. 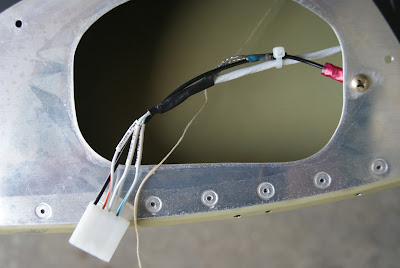 Wires attached onto the Molex connector for the left wing’s navigation/strobe lights.


After the wires from inside the wing were connected to the Molex connector for each wing, the W-1222 wingtip extensions were prepared for final assembly. The assembly instructions call for using a thin coating of fuel tank sealant on the flange of the wingtip extensions that will sit on the W-1204D wingtip closeout skin … this requires masking off the area so when the tank sealant oozes out while riveting, it won’t make a huge mess. A really thin strip of tape also needs to be cut and placed on the edge of the W-1222 extensions between the rivet holes and outer edge of the part. My circuit board etching tape would have been very handy for this, but it was 75 miles away at the southern Outpost ... so I resorted to cutting thin strips of electrical tape with scissors. 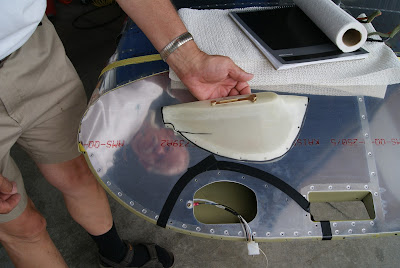 Electrical tape was placed on the wing’s skin leaving about a 1/32” gap between the tape and the W-1222 wingtip extension. One can also see thin strips of tape were placed between the rivet line and the outer edge of the extension.


At this point the W-1222 wingtip extensions were slathered with a thin layer of fuel tank sealant and riveted in place. 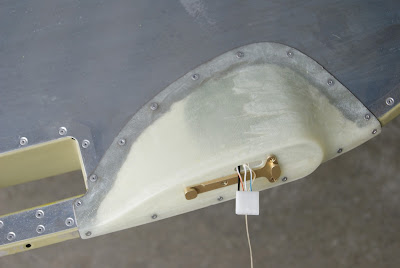 The W-1222 wingtip extension riveted in place onto the left wing. The fuel tank sealant can be seen as the dark area under the flange the rivets are set into.


The physical instillation of the navigation/strobe lights onto the wingtips is a snap (once the Molex connector body can pass through the slot on the W-1222 extension). After the Molex connector body is passed through the slot in the F-1222 wing tip extension and the housing for the light sits directly over the bracket, it is then pushed aft to lock it in in place on the bracket. To secure the light housing onto the wing tip, there is a small set screw that screws into a hole on the aft edge of the light’s housing which tightens up against the bracket preventing the light from moving forward and unhooking itself from the bracket. 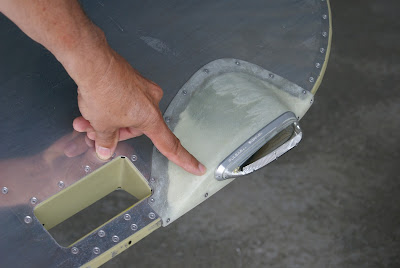 Photo of the completed instillation of the navigation/strobe on the left wingtip. My finger is pointing to the hole for the Allan set screw that secures the body of the light onto the bracket.