Yesterday afternoon the Eagle took its first breath of fresh air mixed with 93 octane Sunoco premium auto fuel and sprang to life in a somewhat spectacular fashion … leaping forward and bouncing, all the while being barely tethered by the brakes.

Prior to taking the wings off to trim a little more metal from the right flaperon the decision to start the engine was an impromptu one at best. It was a nice afternoon, winds were calm, the firewall forward portion of the instillation was completed, fuel tank was almost full so we rolled the DOG Aviation RV-12 outside and went for it. 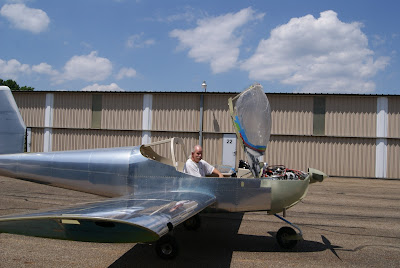 The eagle ready for the first signs of life … the passenger, apparently not so much.

All of the minor issues encountered were of my making due to lack of adequate preparation because this was so spontaneous. For starters, the first couple of turns of the prop where the engine did not fire was due to not pulling the choke lever out. Next, I had a little (correction, a lot) more throttle than necessary when the engine fired up so the RV-12 began moving forward. Not having the seats or seat backs installed in the cockpit meant my legs were fully extended while standing on the brakes. The daftest move was not wanting to hurt the engine by pulling the throttle back until I could figure out where the RPM readout was on the display. The Rotax engine should not be idled less than around 1,400 RPM and ideally 1,800 … so I wanted to make certain that by pulling back the throttle I would be above the 1,400 minimum. But because I was fixated on making sure there was plenty of oil pressure first (there was 58 psi), it took quite a little while to scan the EMS display data to find the  RPM readout … (its on top of the screen) …  if it would have been a snake, it would have bit me before I found it.. (Time should have been spent locating the tach on the display prior to starting the engine).
Here is a video Mike began taking of the of the “event” with his phone as I yelled “clear prop”, closed/latched the canopy and preformed the amateurish first start-up of the Rotax 912 ULS engine in the DOG Aviation RV-12. 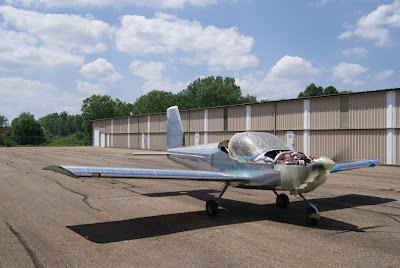 Photo of the first engine run.

The video was stopped just prior to shutdown which was performed with much more precision by pulling the throttle back then switching off the right ignition, waiting a second and switching off the left ignition for an instant stoppage of the engine.

A post-run inspection of the engine reveled no apparent oil or coolant leaks, but it was not really run long enough to know for certain …. although, at this point, it looks encouraging. What was not encouraging is the two small leaks discovered in the brake system … one a little weeping of fluid the other actual drips. Two of the four 90 degree fittings with NPT threads that screw into the master cylinders are weeping/dripping … actually, one fitting dripped a few times the other shows signs of weeping fluid. The drips ARE NOT coming from the Aircraft Specialty Teflon brake lines and associated fittings … rather the fittings they connect onto which are threaded into the body of the master cylinders. This will require draining all the brake fluid from the system, and removing the brake lines attached onto the fittings so each fitting can be removed for inspection, reapplication of thread sealant and hopefully one more complete turn can be obtained when reinstalling the fittings.

After the engine run, the RV-12 was rolled back into the hangar and Bernie assisted with removing the wings so the right flaperon could be filed down a little more and the wing skins tweaked at a few locations. 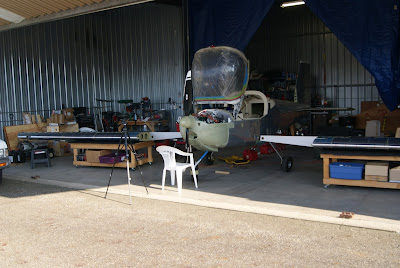 Ten minutes after the engine run was completed the DOG Aviation was back in the hangar with the wings removed so a little more filing away of excess material on the wings can take place. 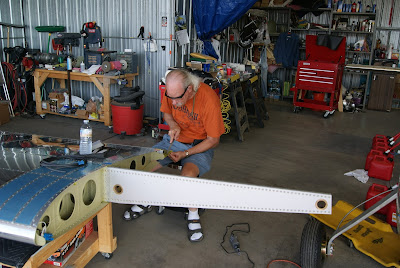 Removing excess material from the right flaperon so there is a 1/8" inch of clearance between the fuselage and the flaperon during full deflections.

Finished up removing material from the right flaperon but there is a little material that needs to be removed from the lower skins on both wings where the F-1204R side cover assemblies reside.