The majority of the week has been taken up by working through a few issues … some known, some discovered. Although not big deals, in and of themselves, collectively they have taken quite a bit of time to resolve.


The first issue arose when Bernie swung by to assist installing the canopy assembly … it was discovered the nut and washer would not fit between the canopy strut and the faring. When doing the canopy layup, foam blocks were placed in this area knowing there was a possibility for issues here. Apparently the foam blocks could have been made just a bit thicker because the first layer of the glass cloth sagged just enough from stippling the epoxy resin into the cloth that the nut and washer would not fit … it was close but just not quite enough clearance. Had to use the Dremel tool to remove just a little bit of fiberglass to gain clearance for the nut. Of course, the screw also needed to be ground a little shorter as well so it did not push onto the fiberglass … this took a few on/off cycles on each side to resolve. Fortunately, Bernie was available to give me a hand holding the canopy while the adjustments were made. The left side had the issue with the fiberglass and the right side had enough clearance but the screw needed a few threads removed for a correct fit … the end result, one thread was left protruding the nuts on both sides. 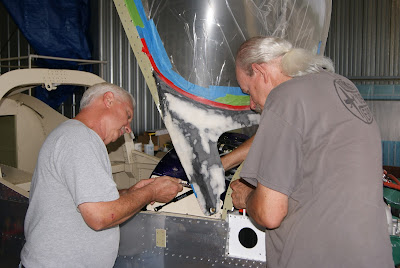 Bernie giving me a hand … finally, after fussing with the fiberglass on the left side and cutting a little off the length of the screws, the canopy struts were able to be installed.


One item that has been known about since the initial wing fitting is the inboard edges of both wing skins needed to be cut back a little so there is 1/8” of clearance between the inboard edges of the wing skins and the fuselage … this is for a foam rubber gap seal Van’s has the builder place between the wing and fuselage. Not liking the look of the stick-on foam strips, the DOG Aviation procurement department found automotive trim rubber which will provide a clean finished look. The last time the wings were on measurements were taken and marks were placed on the wings. Using a Dremel outfitted with a sanding drum, the small amount of excess material was removed. More material needed to be removed from the lower skins because of the double plates on the fuselage. Unfortunately, the Dremel has a tendency of creating small scallops in the metal so it was necessary to stop short of the line and hand file to the line. The material sands away slowly and to complete both wings took many more hours and sanding drums than one would have thought. 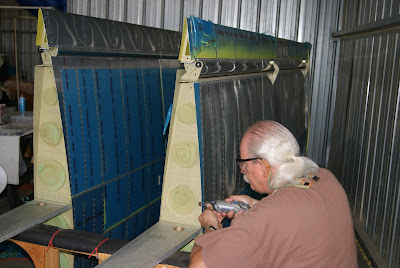 Using a Dremel outfitted with a sanding drum to remove excess material from the wing skins.

Another issue was discovered when adding coolant to the Rotax 912 engine but will cover that in the next posting.
Posted by John at 7:18 AM