Now that the fuel tank has been installed in the DOG Aviation RV-12, thought it fitting to fuel around so to speak and pour some petro in the tank and run a few tests. First test is to pour 4 gallons of fuel into the fuel tank, disconnect the fuel line leaving the gascolator to the carburetors and connect a hose to collect fuel in a vessel that is marked for one gallon. Before starting the test, figured may as well verify the mechanical fuel gauge in the fuel tank is at or in the red no takeoff zone defined by the transparent sticker on the on the gauge … it was. Moving on, when the setup is ready, the master switch is turned on (which normally turns on the fuel pump but I added a separate switch for the fuel pump) and the fuel pump switch was turned on. Next the fuel on/off valve is placed in the on position and the fuel flow is timed. The requirement is to pump a gallon of fuel in less than 180 seconds into a vessel approximately at waist height. The fuel pump and fuel system had no problem meeting this requirement. I ran three passes and found the time changes slightly depending on if the hose is down in the fuel capturing vessel or not … although, either way, the times were still under the allotted 180 seconds. 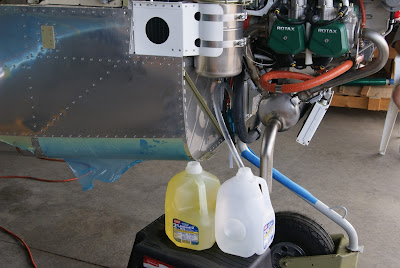 A one gallon milk jug was used to capture and measure the fuel during the fuel flow test.

I jumped the gun a little and decided since I had the fuel at the hangar, I would jump ahead and do the Dynon fuel gauge calibration. Typically, one would wait until after the empty weight and balance measurements have been made before filling the fuel tank. So yes, I will have to drain the tank ... but that is not that big of a deal except for using the stupid gas cans the asses at the EPA have shoved down our throats. Seriously, I have spilled more fuel in the last few years using the new “environmentally friendly” fuel cans than I have my entire life using the old style cans.


Speaking of gas cans, the ones I purchased for the 2 gallon fuel fills necessary to calibrate the Dynon SkyView are very hard to use. If used as designed, they spill fuel like crazy. The can does not have a traditional spout for the fuel to flow out of. Instead, the spout has a flat surface with an O ring on it that when not in use, seals the end of the spout. The spout is spring loaded and retracts when a tab on the spout is pushed against a fuel tank. The problem is … when the spout is retracted to allow fuel to pour out from the nozzle, the fuel hits the flat surface with the O ring and comes out of the spout sideways. This may be OK for a lawnmower but the RV-12’s filler neck has a taper before the straight pipe so the fuel coming out of the nozzle sideways hits the taper and flows right out of the filler neck and down the side of the airplane. I ended up using a wire tie to hold the nozzle open so the whole neck of the fuel nozzle could be placed deep into the RV-12’s fuel filler neck. 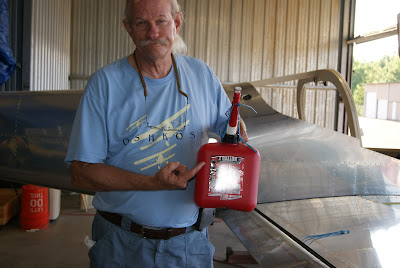 Wire ties were used to depress the filler neck on the fuel can’s mandated “environmentally friendly” nozzle so fuel would not pour out of the RV-12’s filler neck and onto the floor. Looking closely at the photo, one can see the flat surface I’m talking about with the O ring at the end of the nozzle that causes the fuel to come out sideways.


Prior to performing the fuel calibration test, Van’s wants the main wheels to be rolled up onto 2” blocks … (I guess to simulate level flight). To perform the Dynon SkyView fuel calibration test, the fuel calibration menu is selected for tank 1 and the calibration begins with establishing it is a 20 gallon tank and then an empty fuel point is established. Pushing the Add button on the Dynon SkyView will result in asking the user to pour fuel into the fuel tank in 2 gallon increments. Van’s instructions say it is only necessary to pour in 16 gallons for the calibration so that is what was done. I also cheated a little and poured one gallon into the tank and told the Dynon to start the test ...  zeroing with one gallon in the tank. So, in theory, when the Dynon thinks the fuel tank is totally empty, there will be approximately 15 minutes of fuel left. 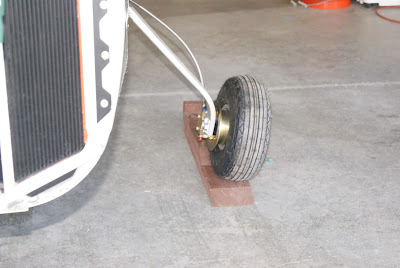 The main wheels are to be put on 2” blocks prior to beginning the Dynon fuel level calibration. 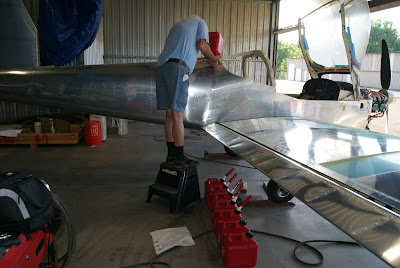 
After the 16 gallons (plus the 1 gallon that was in the tank to start with) was poured into the tank the calibration procedure was terminated and the Dynon display showed an almost full fuel tank on the display.
Posted by John at 6:43 AM