Yesterday, was a very late afternoon start and became mostly a cleanup day of sorts egged on by the fact I could not locate the throttle springs or hardware that came with the McFarlane throttle in the engine crate. After about a half hour into a long overdue partial shop cleaning, the springs were located in the general area I had hoped to find them. Once the springs were located, continued cleaning for a while until I got bored with that and decided to get some progress done … so completed hooking up the throttle cables to the carburetors on the Rotax 912ULS engine.


When using the McFarlane Vernier-Assist throttle control, the builder is instructed to remove the throttle springs that come with the carburetors from Rotax and discard them. The McFarlane throttle control assembly is accompanied by a package of hardware which includes two carburetor springs and two cable stop nuts. My suggestion is DO NOT discard the Rotax carburetor springs because the replacement springs have been known to break. 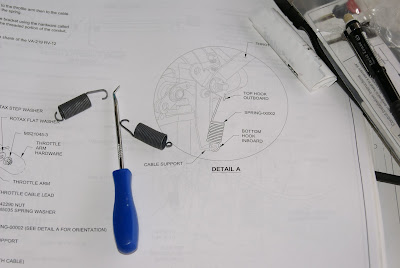 The carburetor springs provided by Rotax are to be removed and replaced with these springs that accompany the McFarlane Vernier-Assist throttle control.


Installing the springs is simple, as can be seen in the above photo of the instructions. However, the use of pliers should be totally avoided if possible so the spring metal does not get scratches that can lead to stress fractures from the vibrations. A rounded spring tool was used to remove the existing springs and install the weaker McFarlane springs. 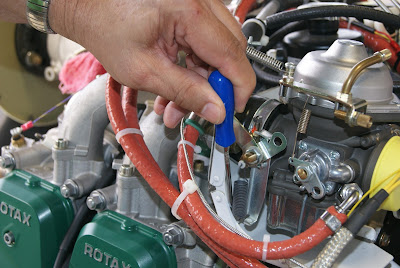 Using a spring tool to install the McFarlane springs on the left carburetor. 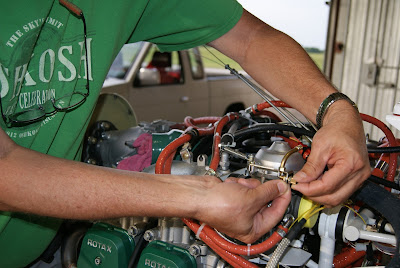 Removing the Rotax cable conduit from the cable bracket … these parts will not be used. 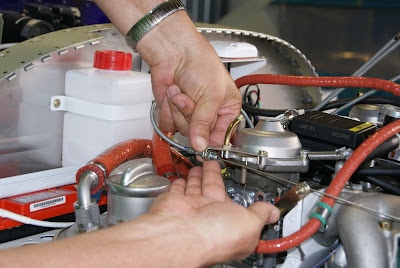 Installing the McFarland cable tunnel onto the cable bracket on the left carburetor. The cable tunnel should be installed so an equal amount of threads can be seen on both sides of the nuts. 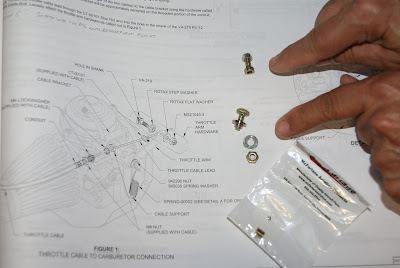 A photo of the assembly instructions. The upper nut and screw my finger is point to was removed from the carburetor’s throttle arm and will not be used. However, the step washer that is slid onto the Van’s provided VA-219 cable bolt and the flat washer below it that my other finger is pointing to will be reused as shown. The cable stop provided by McFarlane in the package will be used as an idle position cable stop.


At this point, the builder is just placing the hardware in a position for a successful engine start. Later there will be a procedure where the carburetors will need to be balanced and the cable hardware will need to be readjusted anyway. Prior to installing the throttle cables onto the throttle arms the McFarlane throttle is to be pulled out away from the lock nut 2 ¾". I made a measuring tool from a tongue depressor to easily set the gap correctly without using a ruler at an angle. 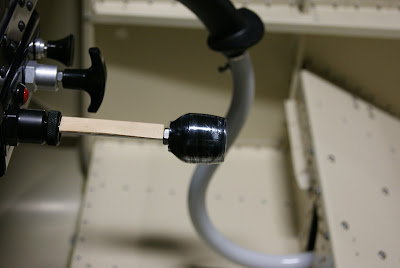 A 2 ¾" strip of tongue depressor was used as a gauge for setting the position of the throttle control in the cockpit for idle.


I was working by myself and the instructions say…  while gently holding the throttle arm on the idle adjusting screw stop and pulling the slack from the throttle cable, tighten the nut to 8-10 inch pounds to secure the cable … two much for two hands. I opted to use a wire tie to hold the position of the throttle arm on the idle set screw and was able to use one hand to hold a wrench on the bolt and pull the slack out of the cable while using the other hand to torque the nut to 10 inch pounds. Caution here: … The cable locking nuts should not be over tightened or it will flatten the cable causing it to fray. A frayed cable will make future fine adjustments very difficult when synchronizing the carburetors … plus, the cable will be weakened and prone to early failure. 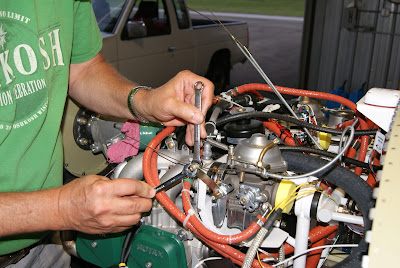 Snugging up the VA-219 cable bolt to the point the throttle arm will still slide on the cable, but barely.


After the throttle arm’s VA-219 cable bolt is tightened to 8-10 inch pounds, the cable stop is slid all the way back to the cable tunnel and snugged down. The viewer can see how nicely the cable tie worked for keeping the throttle arm in position on the idle screw (screw with the orange paint on it). 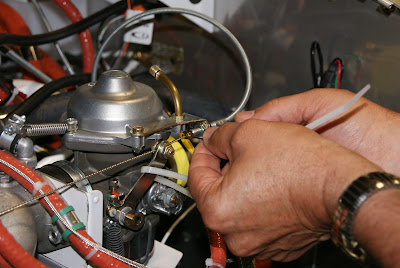 Tightening the idle cable stop against the cable tunnel. 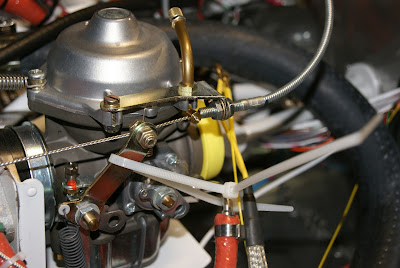 Completed throttle cable instillation … of course, the wire tie needs to be removed.


The throttle cables were installed on both carburetors and all that is left to do is install the choke cables and position and tighten the Adel clamps the control cables are passing through.
Posted by John at 7:28 AM