Since completing the instillation of the rear window on Wednesday, have continued working on various small tasks that needed attention … the first of which, completing the trimming of the right & left flaperon’s inboard skins to obtain the required 1/8" clearance between the flaperons and the fuselage during full deflections of the flaperons.


Another area on the wings that required attention was in the vicinity of the F-1204R side covers for the blue electrical connectors. Unlike most of the other inspection covers on the RV-12, these covers do not seat into a joggle, so they protrude out from the side of the fuselage. The first time the clearances for the wings were measured, the F-1204R side covers were not installed, so it was necessary to remove a little material on both wings to obtain the required 1/8" clearances. A Dremel tool with a sanding drum was used followed by hand filing and smoothing with a 3M sanding block. I did not take any photos because photos of the process have already been posted in recent posts. 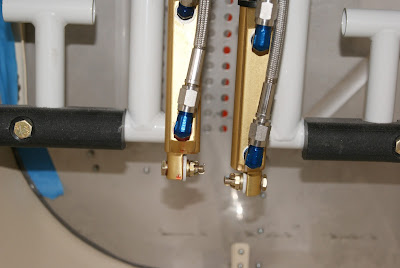 The pilot’s side master cylinder for the left brake has a leaking 90 degree fitting as can be seen here. This fitting was actually dripping a bit. 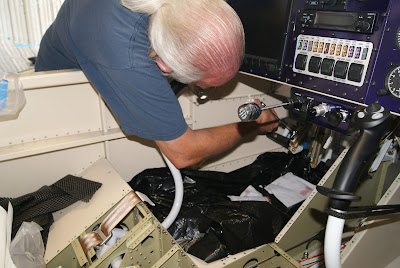 Snugging down the brake line to the pilot’s left master cylinder after tightening the 90 degree fitting one additional turn tighter. After this, a torque wrench was used to obtain the final torque on the fitting. Hopefully, one turn tighter will solve stop the drips because the fitting will never make it another full turn.


At this point, it was one down and two to go. The other leaks were on the co-pilot’s right master cylinder. They were not a physical dripping yet, but the fittings were definitely beginning to weep … so figured may as well fix it now. 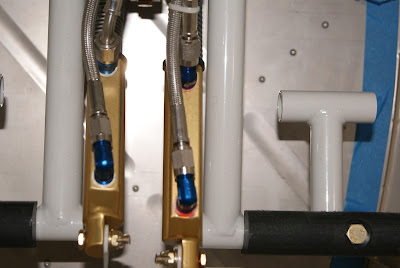 Both the fittings on the co-pilot’s right master cylinder are showing signs of weeping.


The first fitting tackled on the right master cylinder was the upper 45 degree fitting … here again it was removed counting the turns and it too was three turns in. The same procedure as used above was used to work the fitting into the master cylinder one more turn and the brake hose was connected. However, when working on the 90 degree fitting on the bottom of the master cylinder began to run into issues. That fitting was screwed in 3 ½ turns to begin with. Using the previously mentioned procedure to progressively work the fitting deeper into the master cylinder discovered at the 4 turns point there is so much resistance that I feared if the fitting were to be made any tighter, it will either crack or break off in the master cylinder. I also suppose it may be possible to place the male 90 degree fitting in a die and screw it in tight and try seeing if another ½ turn can be obtained. However, have decided to first try another new 90 degree fitting and a different type of thread sealant that hopefully will do a better job of filling the voids in the threads … especially if I can’t get the new fitting to go in any further than the original one. So will have a little setback while waiting for the parts … but there are other things yet to do.
Posted by John at 8:55 PM