Even though today was a nice day for painting, I decided to head out to the airport to help Mike with his cowlings and a little project he had planed for his airplane.  Also finished up the hangar wiring yesterday and wanted to test the new outlets and see how well the new light worked.

The new high output florescent fixture works fantastic … I’m so pleased with it that I think I’ll only need to add one more as opposed to two. The new light truly puts out a heap of light. I took a photo in the hangar with just the two incandescent ceiling lights on and another photo with the new light on as well. The area with the new light looks brighter to be sure but that is only half the story … when the incandescent lights were the only lights on in the hangar, the camera compensated for the low lighting by keeping the shutter open for close to two seconds to obtain the proper exposure. When the new high output florescent light was turned on, the camera probably only had the shutter open for 1/8 of a second or so. The light level difference is HUGE but of course, the camera tries to compensate, so the photos don’t look anywhere near as dramatic as it truly is. 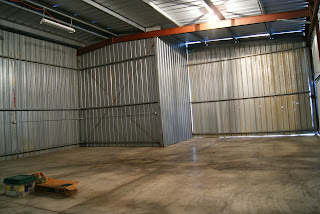 Photo taken with just the two incandescent lights on. 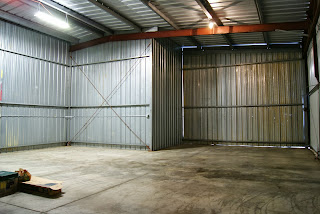 Photo taken with the new high output florescent light on ... you can tell the light is bright.
The aim of this Blog has been to document the building of the RV-12 and DOG Aviation’s infrastructure … thus far I’ve kept the content true to that. However, today will be an exception because of the cool factor of an encounter Mike and I had this afternoon at the airport.
Working on the RV-12 project at the airport will be a mixed blessing. Yes, there will be plenty of room but there are also distractions … lots of great people to meet, cool airplanes to check out and the occasional need for both lending and receiving a helping hand. Today was one of those days to GLADLY lend a helping hand.

Prior to getting started on Mike’s little project, we got in his golf cart (aircraft tug) and headed to the local FBO to get info on some parts Mike was looking for. On the way back to the hangar, Mike noticed a hangar door open and what looked like a radial engine. We just had to turn around and head back to check it out. Much to our amazement, we stumbled upon a gentleman (also named Mike) who was prepping his 1949 NORTH AMERICAN AT-6G with a 600 horsepower Pratt & Whitney R-1340-AN-1 radial engine for an engine start. Apparently, the airplane had not been started in two years because the owner has been out of state.
Mike, the owner of the AT-6, had called a friend for help with pulling the aircraft out of the hangar but the friend was not available. So Mike and I gladly offered our services ... we helped prep the area around the aircraft so it could be safely pulled out of the hangar. Mike’s golf cart is outfitted with a ball hitch on the front … because in addition to being transport for getting around the airport, Mike also uses his golf cart as an aircraft tug to move his airplane in and out of his hangar.  Much to our amazement, the golf cart was able to roll the over 4,000 pound AT-6 out of the hangar. 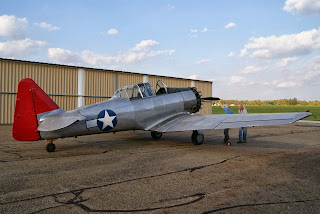 The AT-6 after Mike used his golf cart/aircraft tug to pull the war bird out of the hangar.
Mike (the AT-6 owner) began running the prop through to insure the engine did not develop a hydraulic lockup … Mike said with a radial engine, it is suggested to run the prop through for as many revolutions as there are cylinders prior to starting the engine. 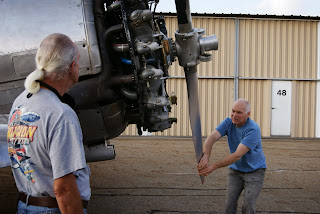 Looking on and giving moral support as Mike ran the prop through on his AT-6 prior to attempting an engine start. 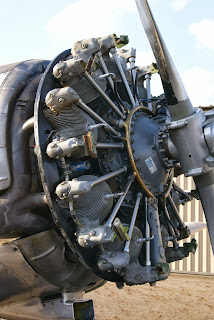 That, my friends, is a 600 horsepower beast of an aircraft engine. 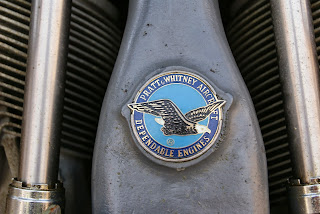 The name says it all!
As is often the case with long term storage of motor homes, boats and aircraft, the batteries go flat. Once that happens … the battery is NEVER the same as Mike quickly discovered. When it was time for Mike to shout “clear prop” … much to all our disappointment, instead of hearing the whine of the starter as it strains to turn the prop, all we heard were a few clicking sounds. After talking to Mike, he said the battery went flat prior to today and he just put a trickle charger on it. Apparently the battery was to far gone to take a deep charge. 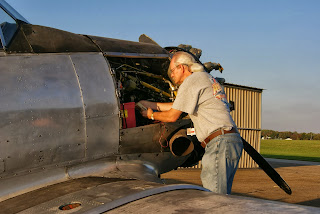 Checking the AT-6’s battery voltage with a volt meter.

Since the AT-6 was out of the hangar and there was help, Mike decided he would try to hand prop the AT-6. Of course, there would be a need for somebody in the cockpit while Mike tried hand propping the aircraft … any volunteers? You bet there is!!! 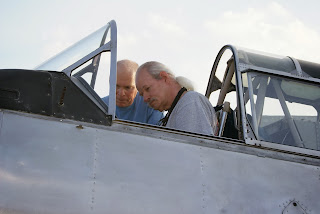 Mike pointing out where the magneto switch is located on his AT-6 along
with throttle and fuel mixture controls … and most importantly, the brakes. 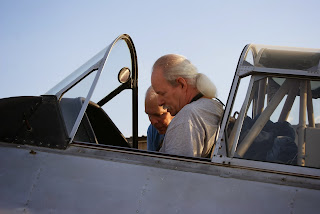 Mike giving me instructions on how to use the AT-6's hand “wobble pump” to build up fuel pressure with the left hand while at the same time pumping the fuel primer with the right hand. All new to me. 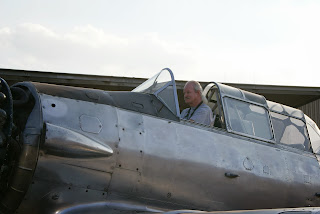 Crash training course over and on my own in the AT-6 cockpit ready for the
big moment ... seems a little snugger than the RV-12 cockpit will be. 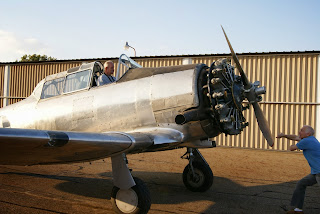 Mike tentatively hand propping the 600 horsepower Pratt & Whitney radial engine
while I’m at the controls praying for a good (and uneventful) engine start.


After a few pops, the prop kicking backwards a few times and the engine running backwards for a couple of seconds at one point, much to my disappointment, we never did get the AT-6 to start. Mike was very tentative about hand propping the aircraft and for just cause … people have been seriously injured or worse turning a prop by hand. In the interest of safety, rather than continuing on, we decided since a battery would be needed anyway, it would be better if we just rolled the AT-6 back into the hangar before anybody got seriously hurt. We gave it a good effort, but today was not the day. And of course, my delusions of grandeur of being at the controls of a AT-6 war bird with a running 600 horsepower radial engine evaporated about as fast as the moderately sized puddle of aviation fuel between my feet left by the leakage from manually pumping the engine primer. But hey! What a day!!!

By this time, the sun was getting low in the sky and we never did get to work on Mike’s project or put the cowlings back on his airplane. But neither of us cared, we both enjoyed the unexpected distraction and excitement at the airport … not to mention the meeting of a new friend and a potential future helping hand when we need one. Oh, there is also the possibly of cashing in on the offered ride in the AT-6 at some point in the future! Oh, baby!