In spite of a Friday early morning misty drizzle, which fortunately only lasted a few minutes, the current cramped DOG Aviation production facility was abandoned today for the much roomier hangar at the airport.  With the aid of team Mike  … aka … Mike T. & Mike K., all the tools, crates, shelves, work benches and aircraft parts were moved to the hangar over the course of three trips utilizing Mike T’s large snowmobile trailer. Some of the tail feathers were left behind because of the lack of horizontal storage options in the hangar… but those items can be easy transported as necessary. 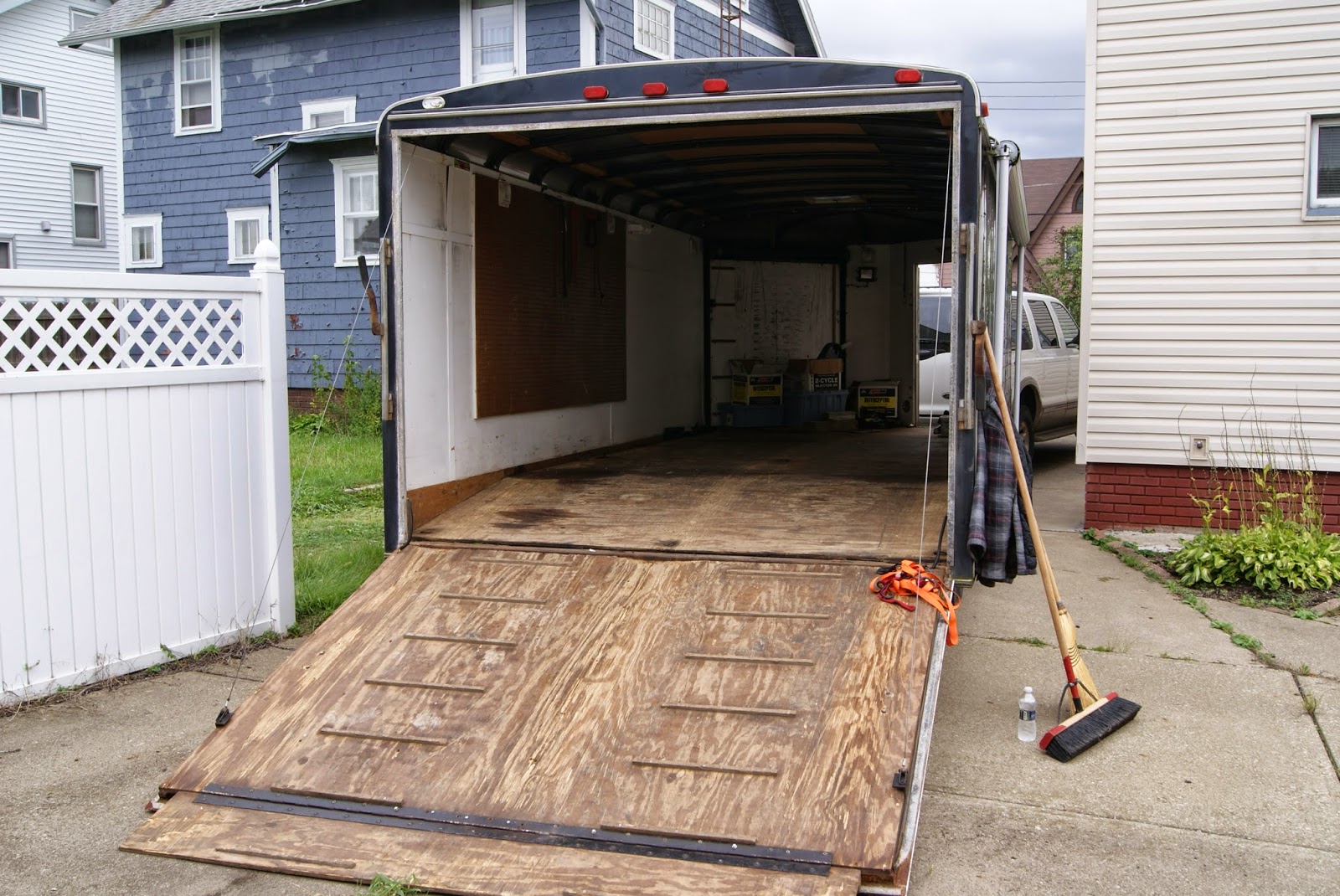 Mike T’s trailer ready to accept the contents of the about to be abandoned DOG Aviation production facility #1.
Kudos to Mike T.’s trailer backing skills … with less than a foot between the neighbor’s car on one side and the house on the other, Mike T. made it look easy. The first load taken to the airport consisted of all the power tools, two of the three work benches and the fuselage crate filled with painted panels and lots of stuff.  I thought it would be harder than it really turned out to be. With three of us to handle the larger items, nothing was too heavy to handle, plus most everything was on wheels which really helped immensely. 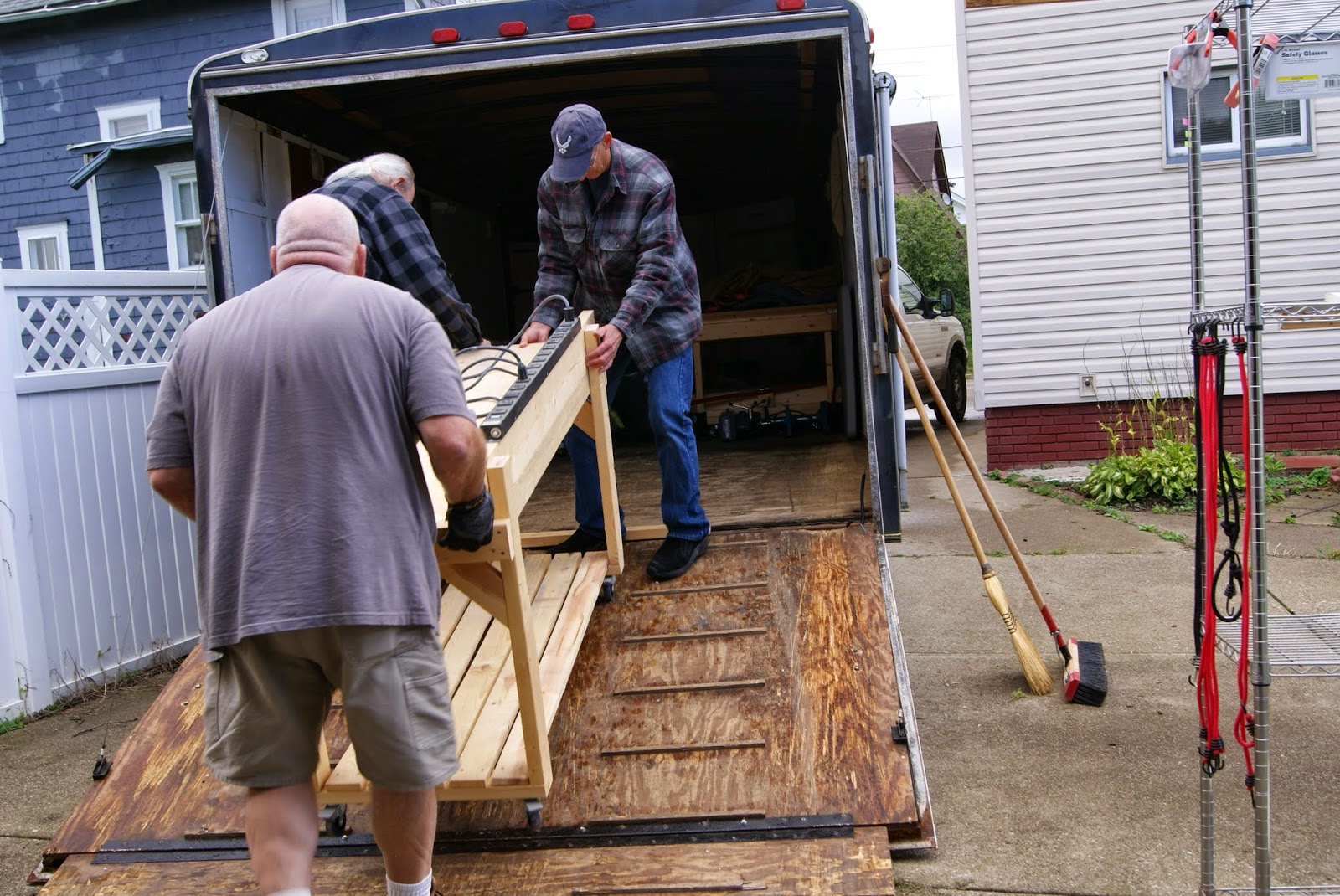 Team Mike and I loading the power tool workbench onto the trailer. 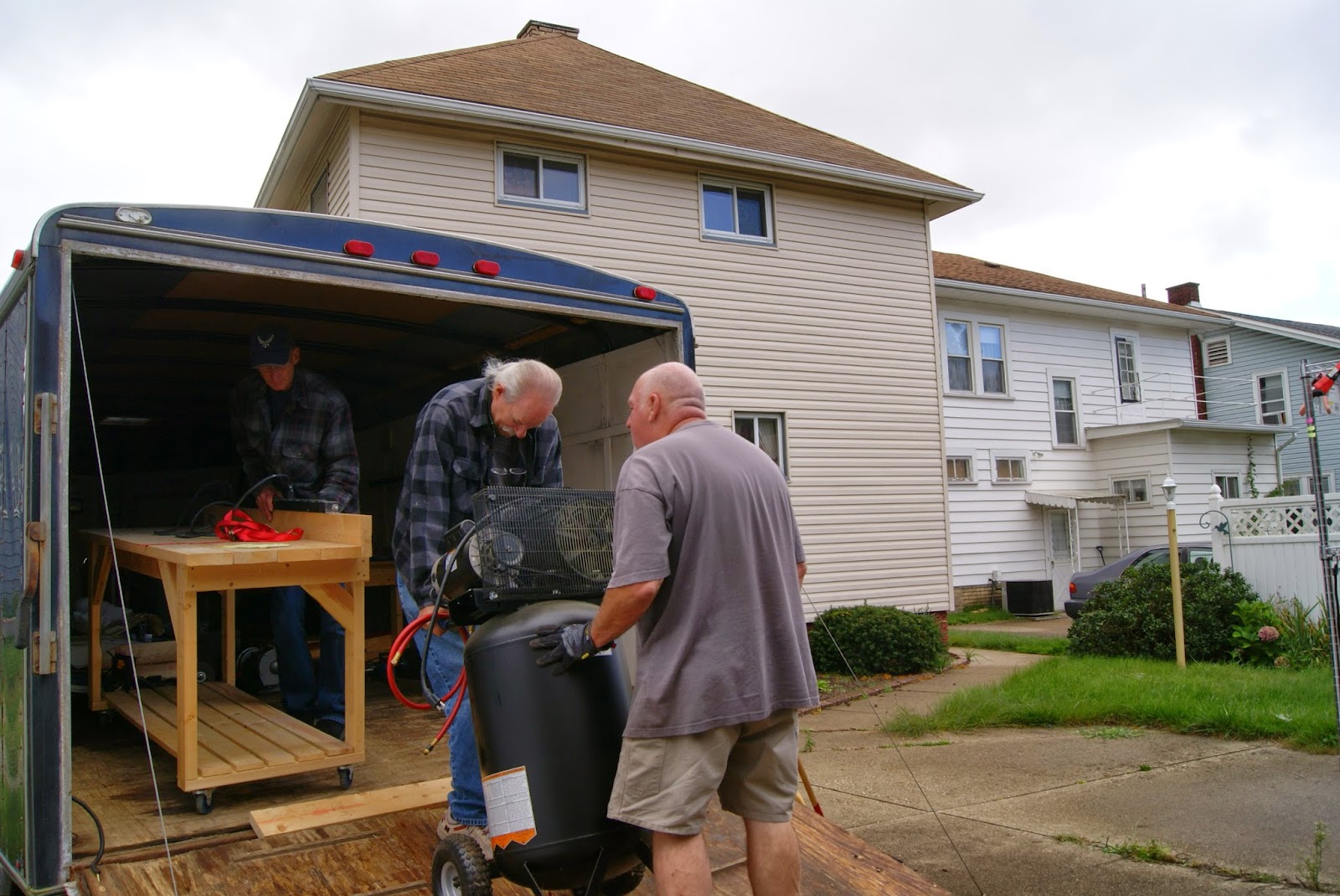 Mike T. helping with the loading of the air compressor up the trailer's ramp. 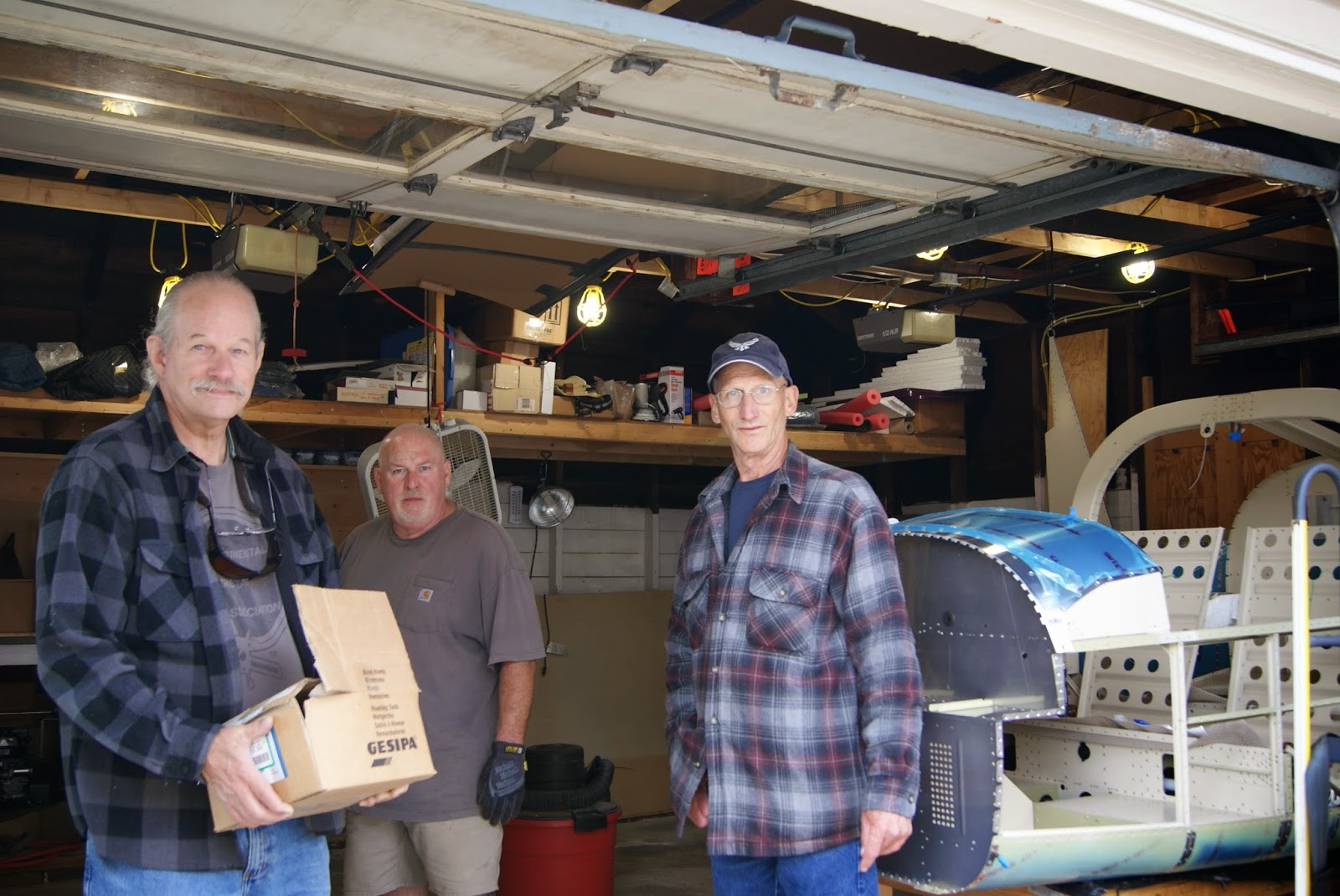 Left to right – myself and team Mike comprised of Mike T. & Mike K. 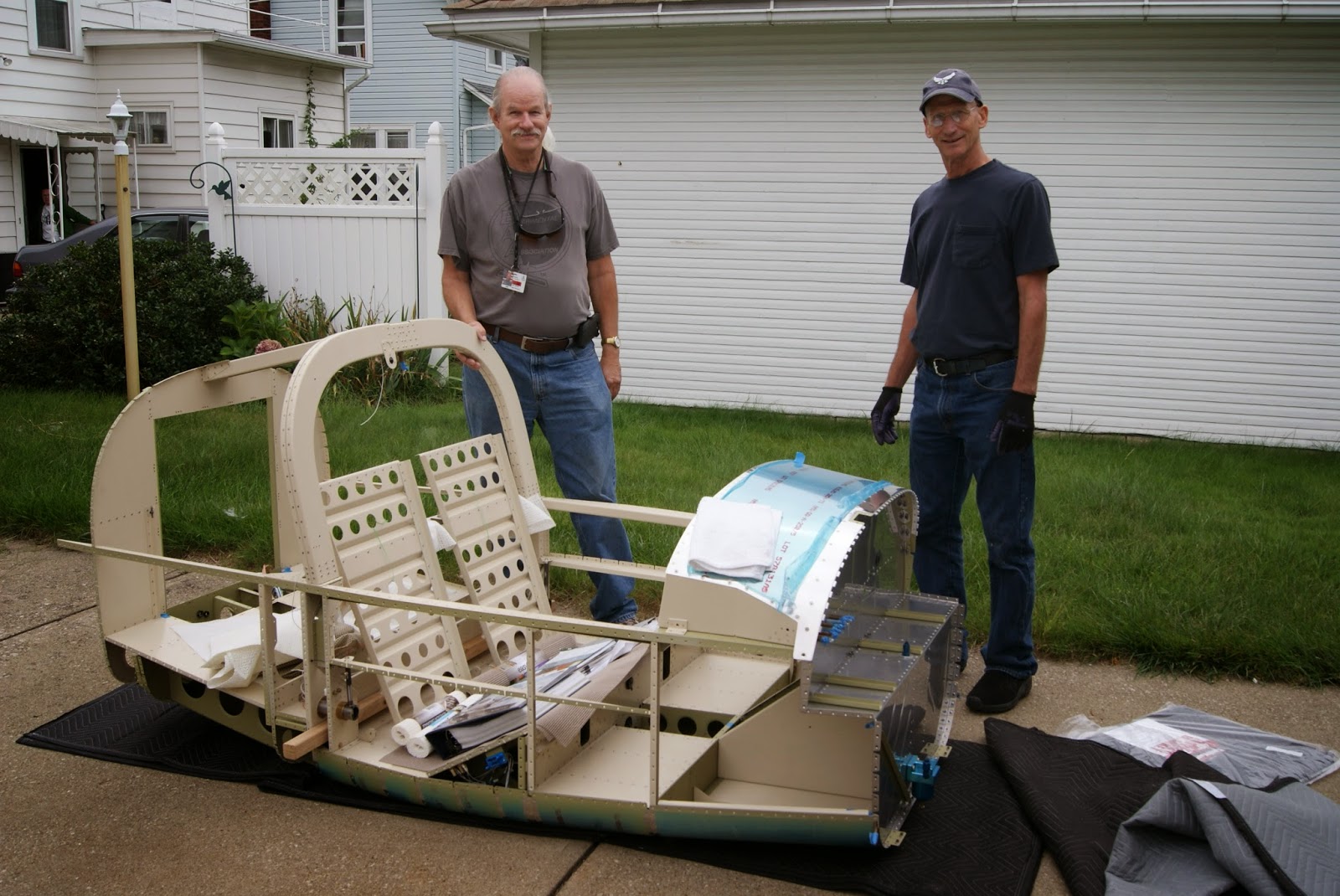 Mike K. and I standing by the fuselage after removing it from a workbench so the workbench could be loaded onto the trailer … note the 2x2 spanning the fuselage under the spar pins that was used as a handle to easily lift the fuselage assembly. 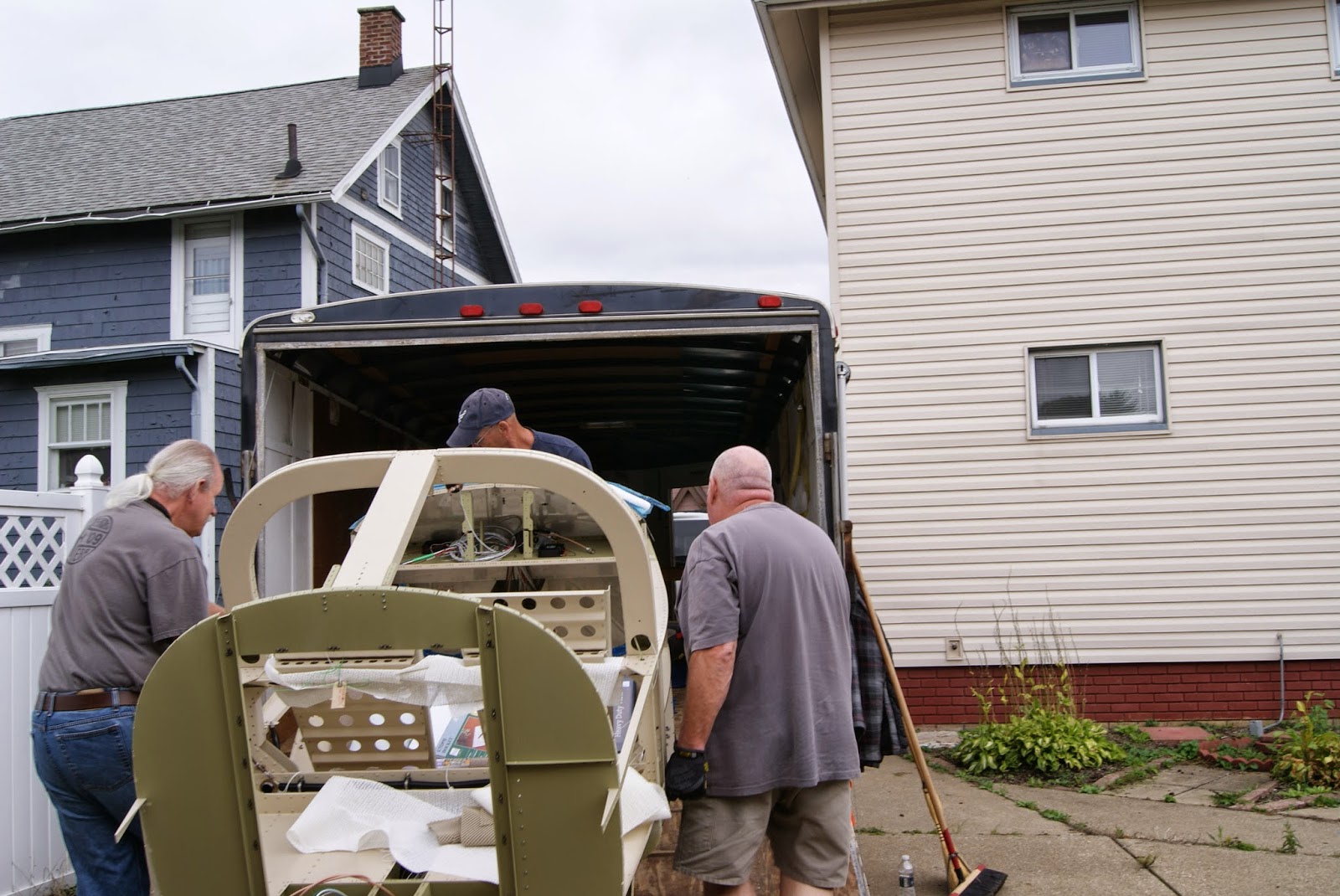 Team Mike and myself about to load the fuselage into the trailer for the short trek to hangar 45.

After the fuselage was inside the trailer, the 2x2 was removed and the side skins were temporarily attached to the fuselage with a few Clecos to cerate a safe way to transport them. Decided to do it this way because with the side skins on, there is only a narrow slot  for the spar and I wanted to have the strength of an uncut 2x2 for a handle. 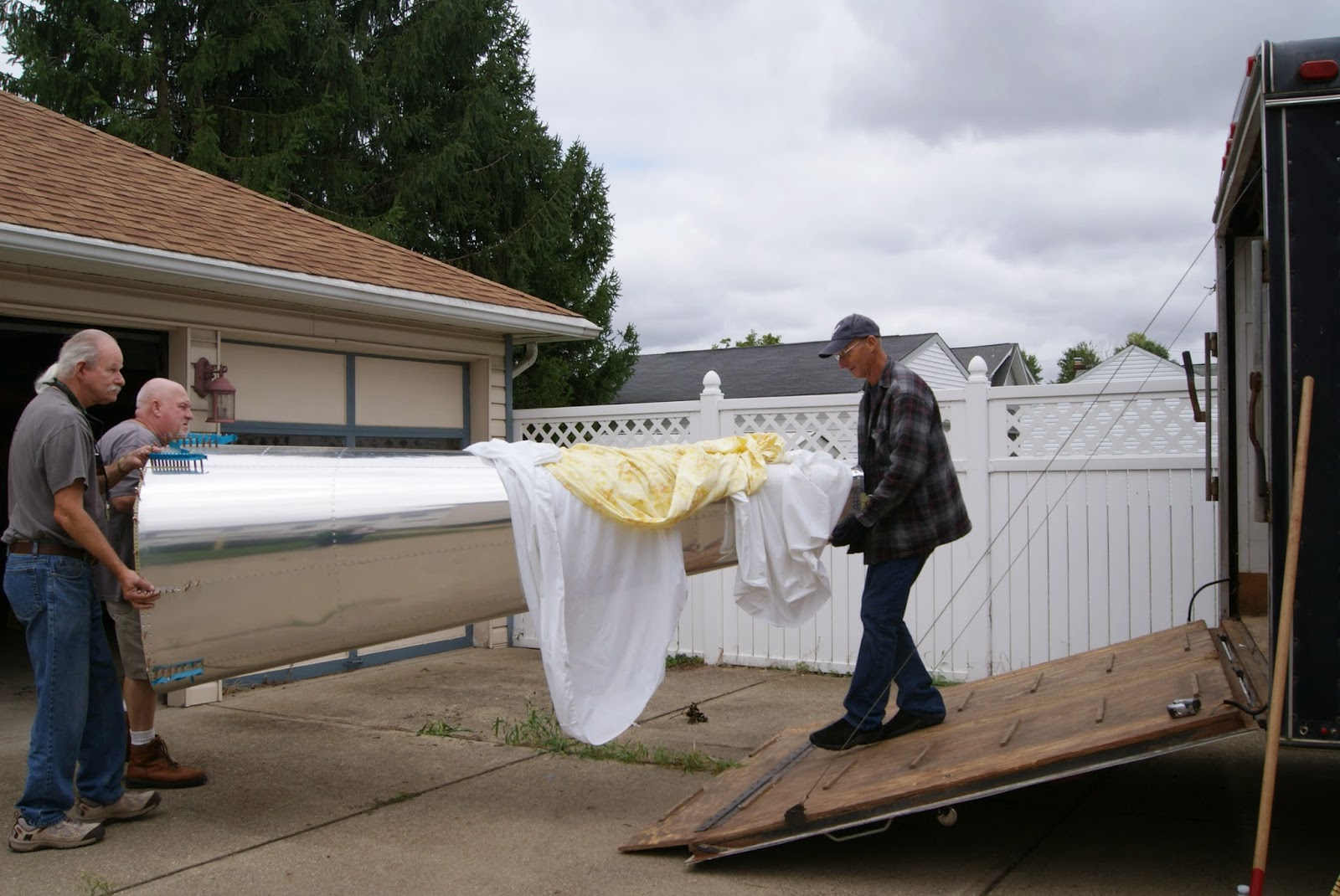 The tail cone sees light for the first time in 2 years as team Mike and I load it into the trailer. 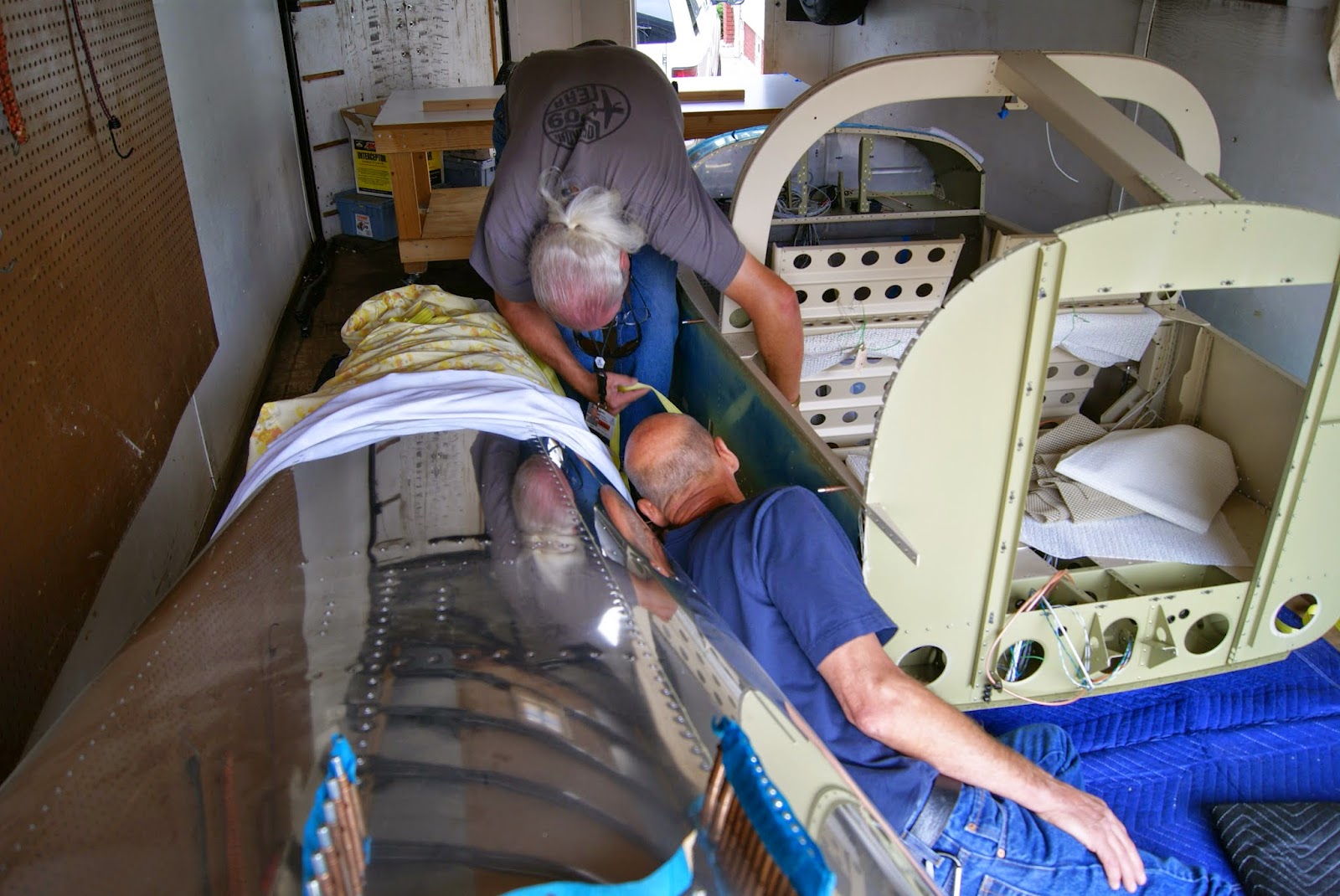 Mike K. and I securing tie downs around the spar pins to prevent the fuselage from moving … note the side skins are now attached to the fuselage with a few Clecos in the longeron. 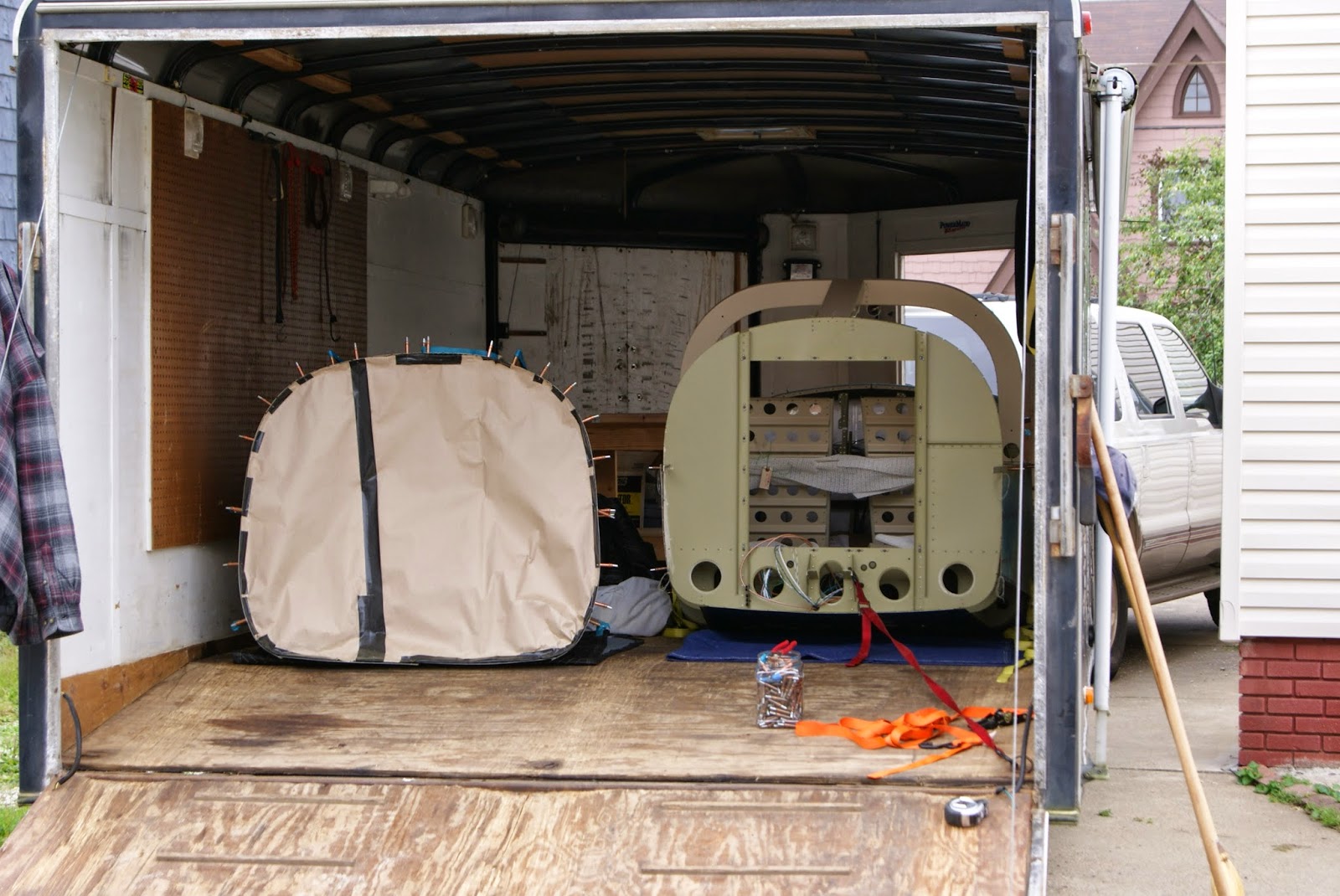 The RV-12's fuselage and tail cone secured in the trailer and ready for the short trip to the airport.

Once at the hangar for the second time, the tail cone was placed on a workbench for easy mating (hopefully) to the fuselage. Also, the side skins were removed from the fuselage and the 2x2 was reinserted so the fuselage could be carried off the trailer and set onto a workbench. 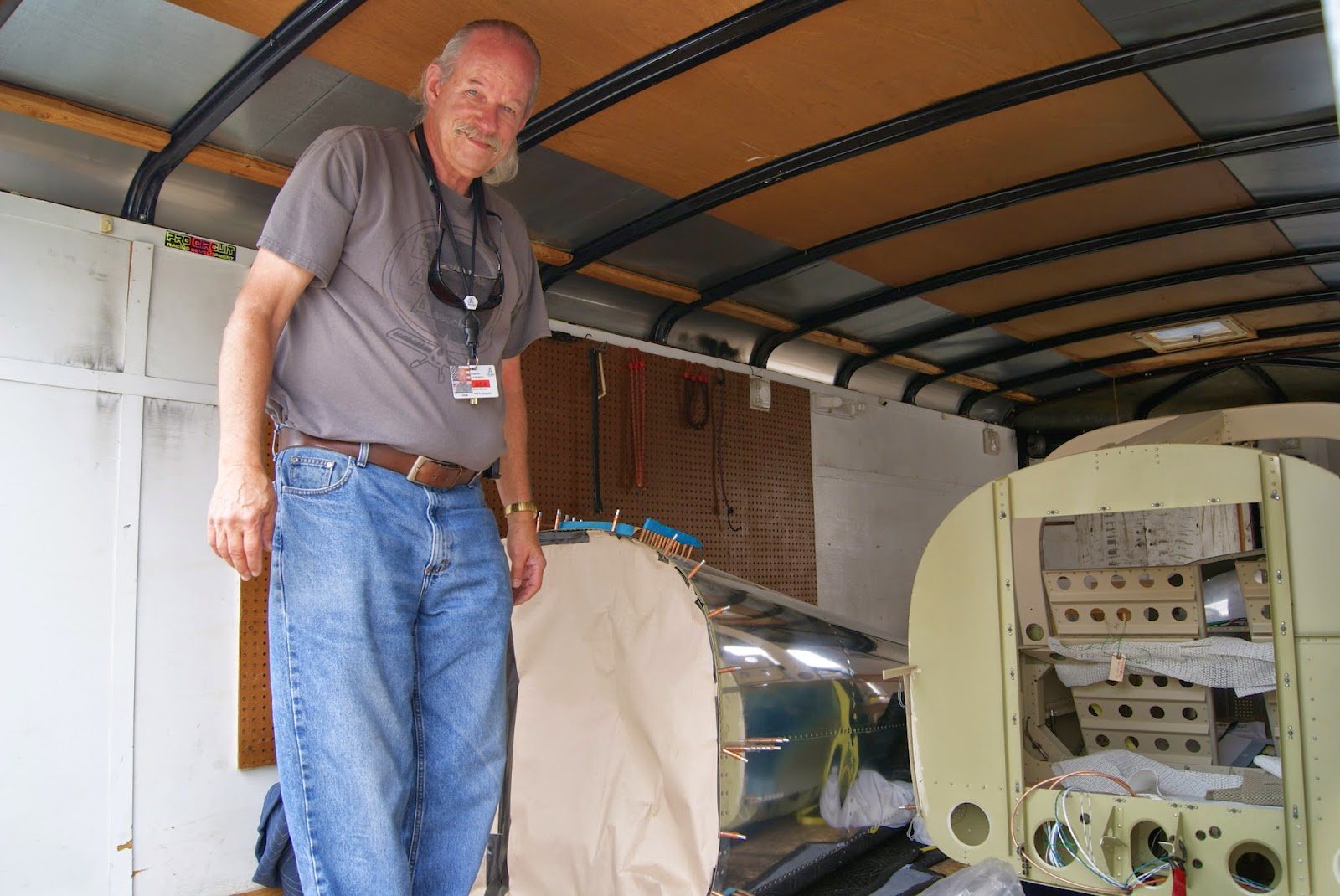 Once at the airport there was a sigh of relief and a smile after inspecting the trailer’s contents and seeing the RV-12’s tail cone and fuselage made the trek to the airport unscathed. 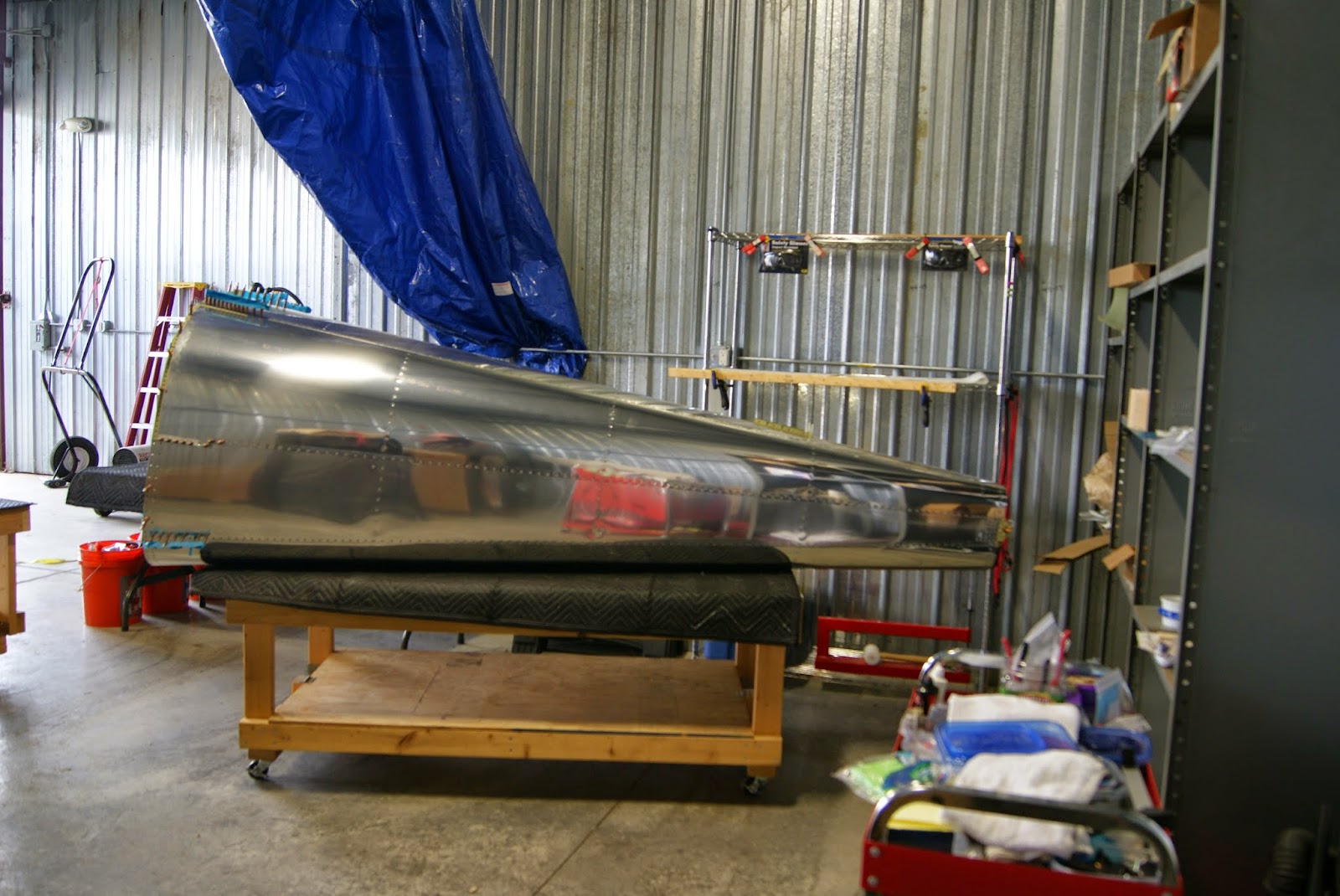 The RV-12’s tail cone sitting on a workbench in its new home at hangar 45. 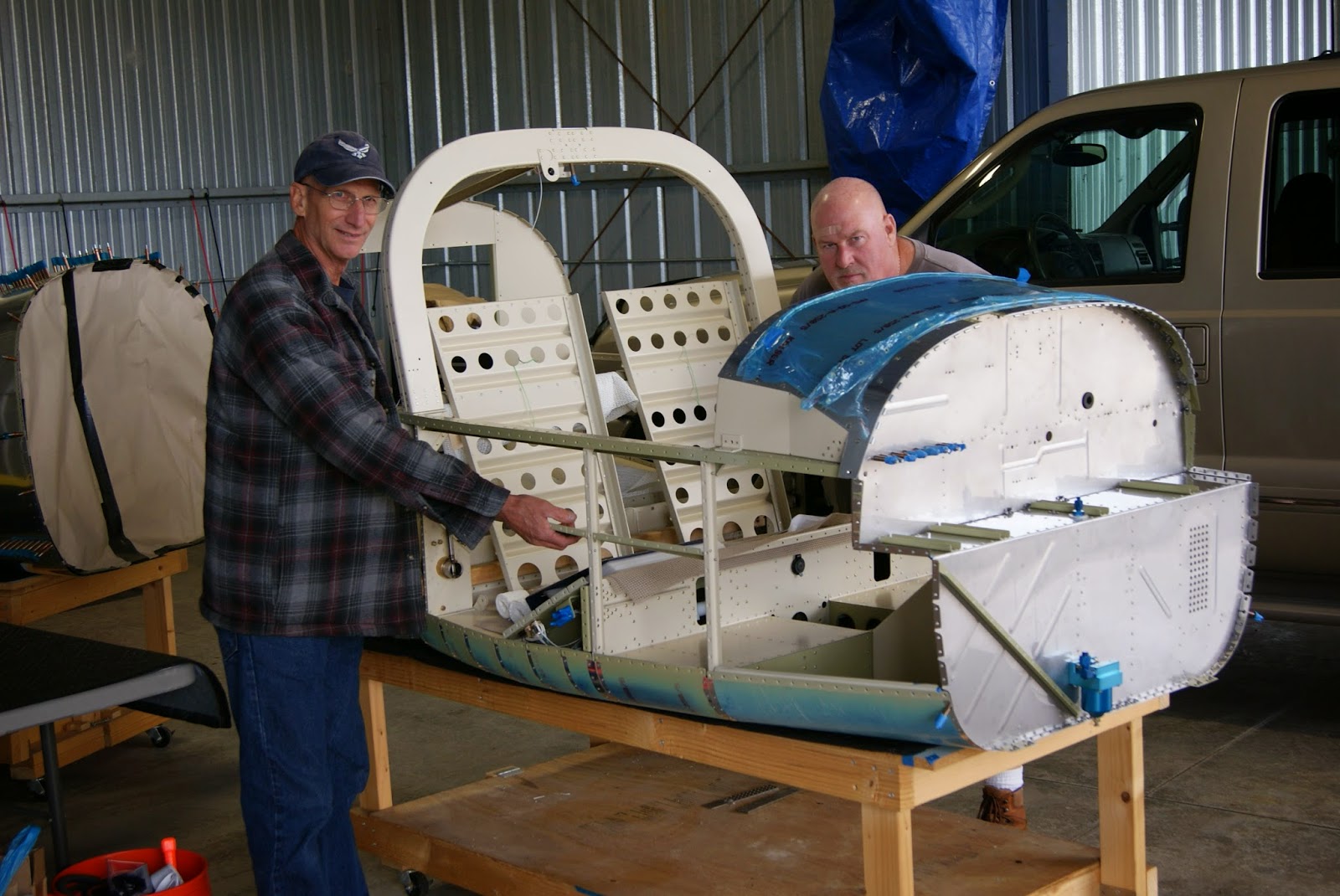 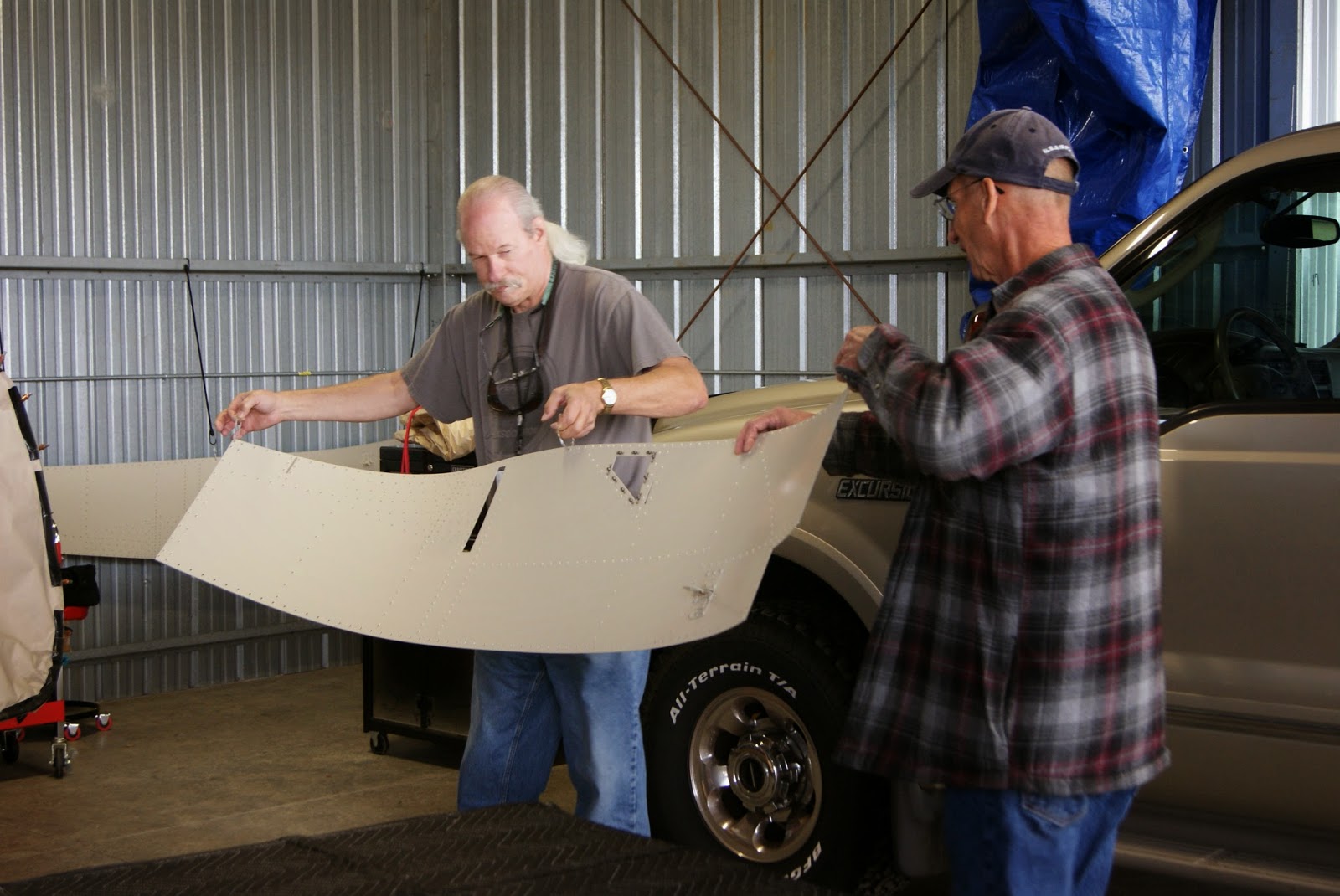 Mike K. helping me to move a fuselage skin to the back wall of the hangar so it could be hung by bungee cords to keep it out of the way for a little while.

The third and final trip involved the transporting of the wings. Shortly after building the wings seemingly eons ago, the spar crate was converted into a wing caddy with wheels. The caddy was made sturdy with this moving day in mind and ultimately worked out quite nicely. Getting it into the trailer was a little challenging because the trailing edge of the wing tips were slightly taller than the opening to the trailer. Team Mike lifted up on the spar end of the wing caddy and that was enough to lower the wing tips enough to get the wings it into the trailer. Once inside, there was plenty of room and the caddy was a snap to secure with tie downs. A bunch of moving pads were stuffed around the carpet cradle portion of the caddy and the spars were tightly strapped down to the caddy. 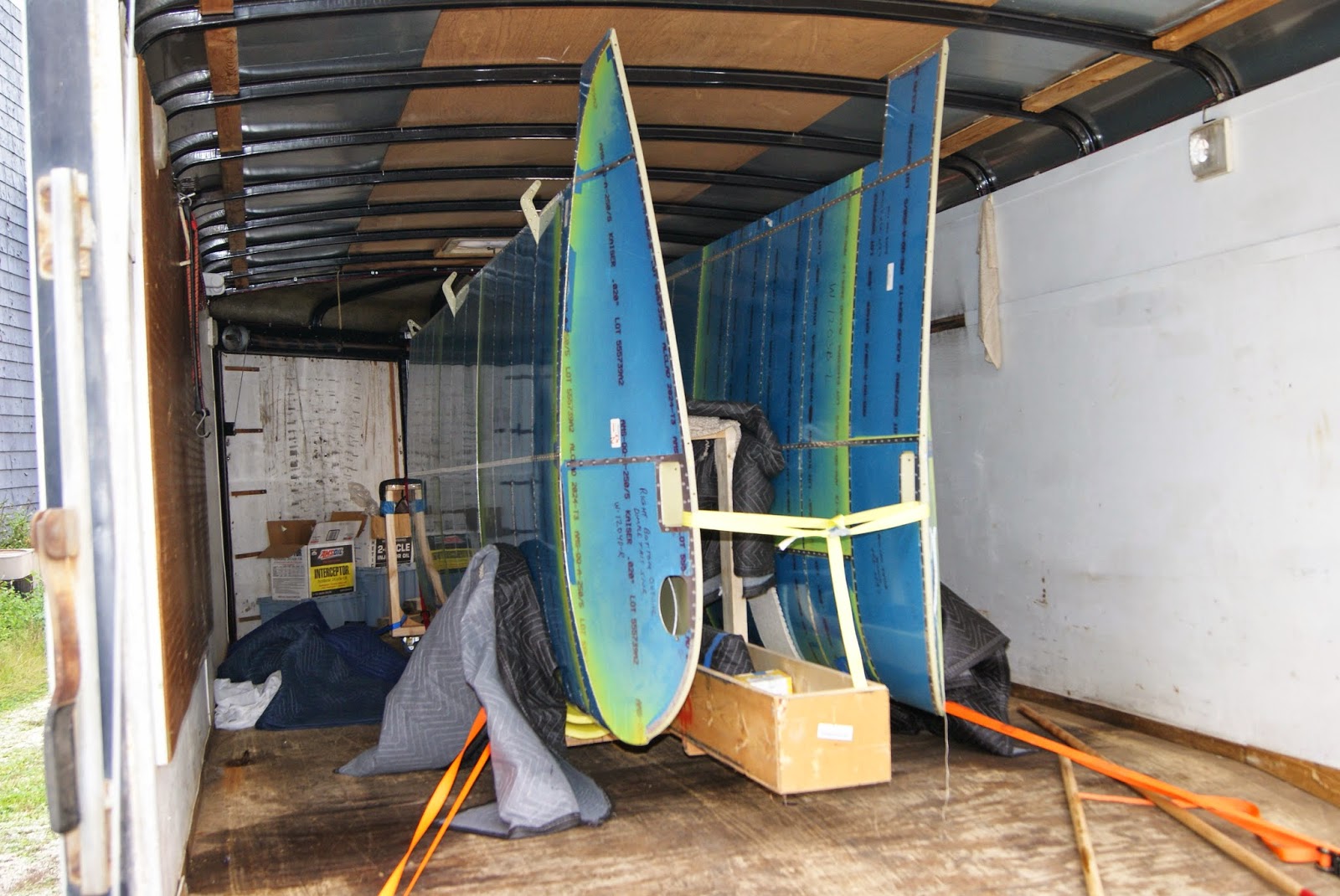 RV-12 wing caddy with wings inside the trailer ready for relocation to the airport. 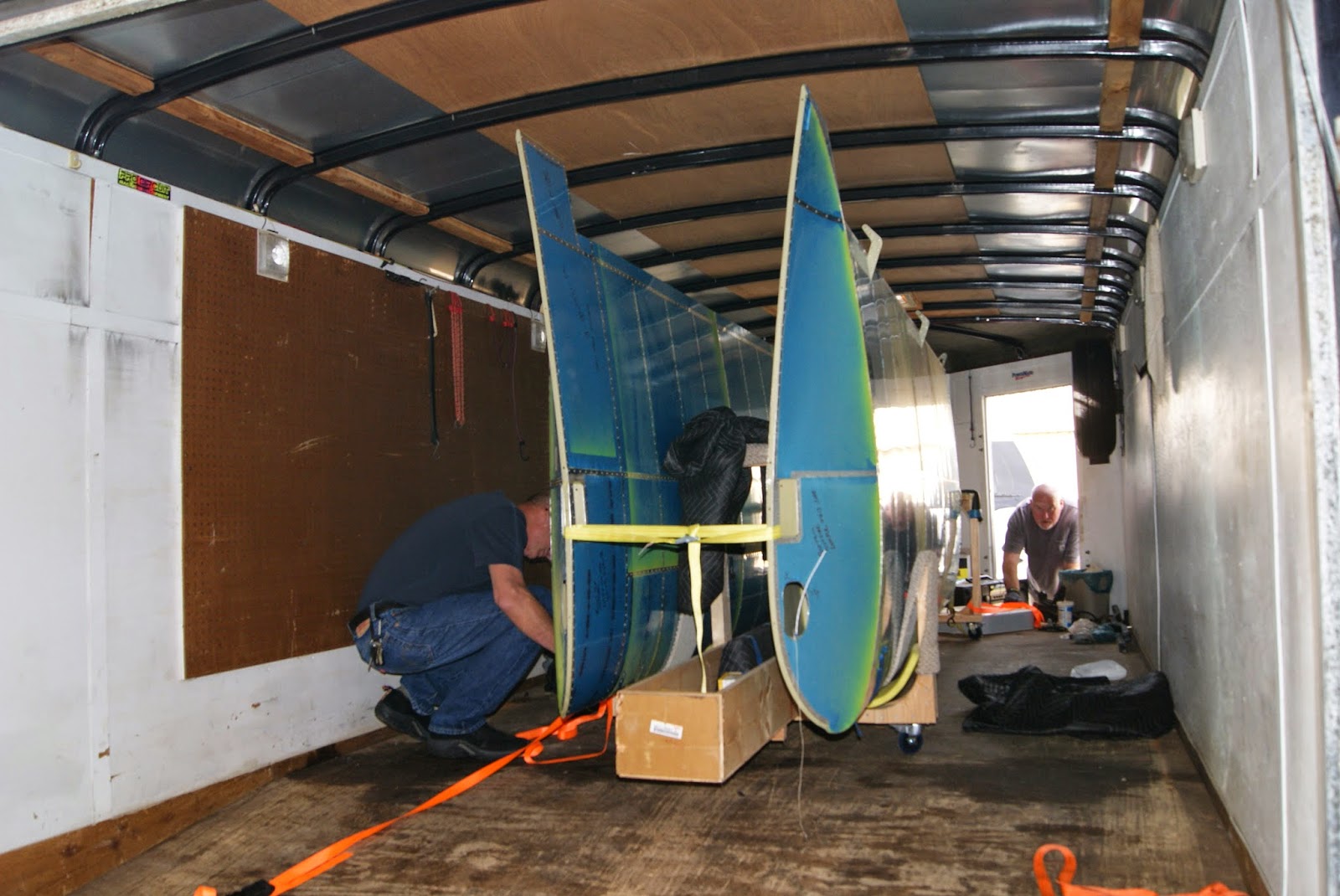 Team Mike removing the tie downs used to secure the RV-12 wing caddy after arriving at the airport. The wing caddy did its job well, as both wings remained unscathed from the transport to the airport.

With the careful help of team Mike, moving  of DOG Aviation's production facility to the airport went great! Thanks guys! Nothing was damaged, bent, folded or mutilated and most especially … nobody got injured in the process. Guessing it will take a day or two to get things organized in the hangar well enough that construction of the RV-12 can continue to moving forward.