Those RV-12 builders building their aircraft as E-LSA can, by in large, ignore the entire contents of this post. Early on the plan has been to outfit the DOG Aviation RV-12 with a couple of tried-and-true steam gauge instruments for backup … in particular, an airspeed indicator and altimeter, both of which requiring a static air source.

As mentioned in a previous post, one of the reasons the side skins have been left off is just in case it was necessary to establish an alternative routing through the fuselage for the static air line and/or the tubing from the wing for the Angle Of Attack (AOA) display which will run into the tail cone.

Because the ADSB antenna cable is routed through the center tunnel, there is not an abundance of extra room in the wire grommets between the aft bulkhead on the center channel and the aft bulkhead on the fuselage. At first I was not going to install the static line in the center tunnel grommets because the fit appeared way too tight. However, with a little rearrangement of the wires and pitot tube already in the grommets, the necessary room was made to insert the 1/4"static air tubing. Don’t get me wrong, it is still a tight fit … but not so tight that adjacent wires can’t be moved like it was prior to arranging the wires in the grommets better. 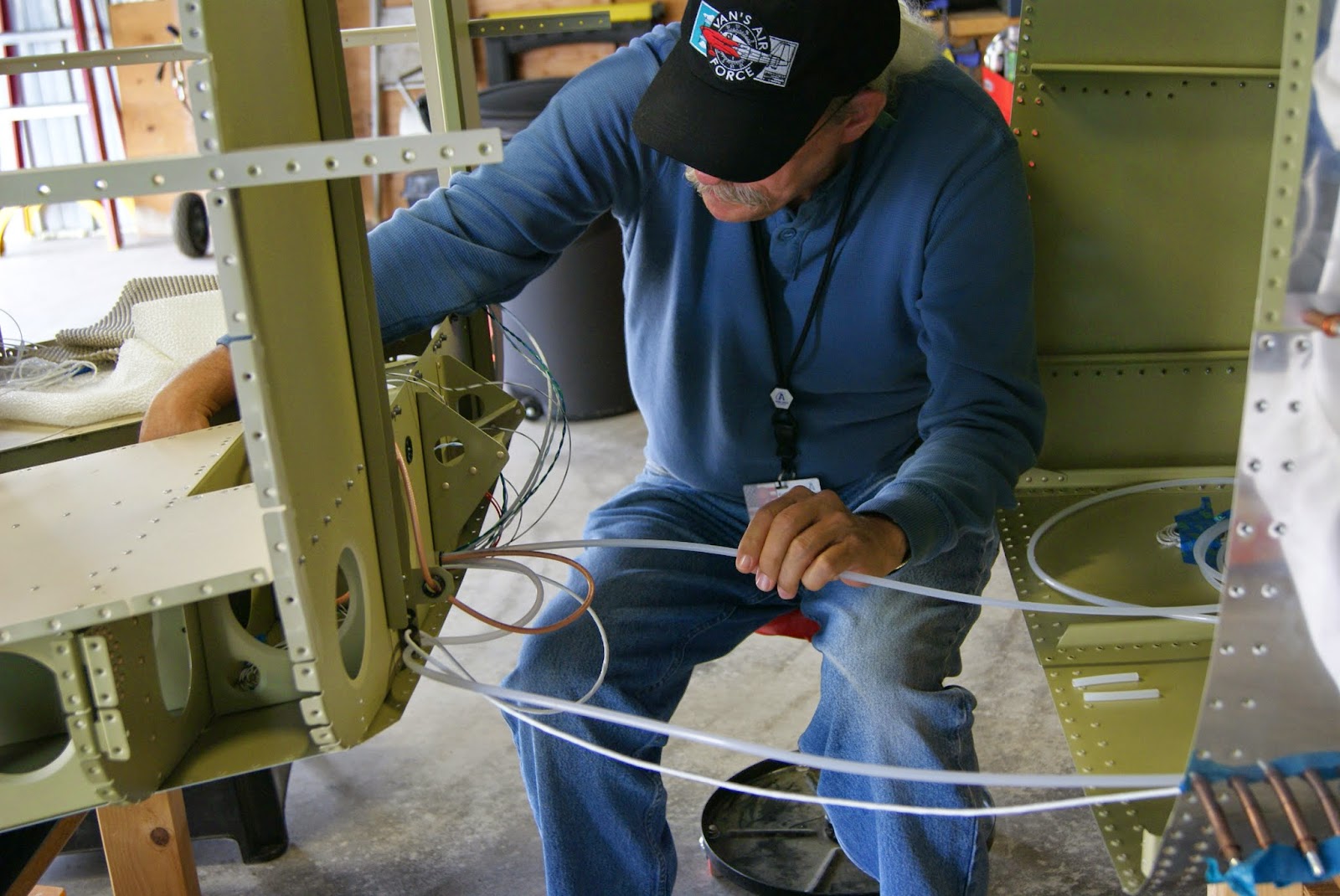 Installing the extra static air tube through the wire grommet on the aft bulkhead of the fuselage.

I did find a time saving step that made one person instillation a little easier. A couple of small pieces of tubing were cut and placed into the wire grommets to hold the positioning for the static air tubing. A piece of tape was wrapped around the tubing to seal it off from dirt and extended slightly beyond the end of the tube and formed into a point. When installing the tubing into the grommets, the tape point was inserted into the small tubing pieces used to hold positioning ... as the static air tubing was pushed into the grommets, the small pieces of tubing slid out the other side. This worked quite well. 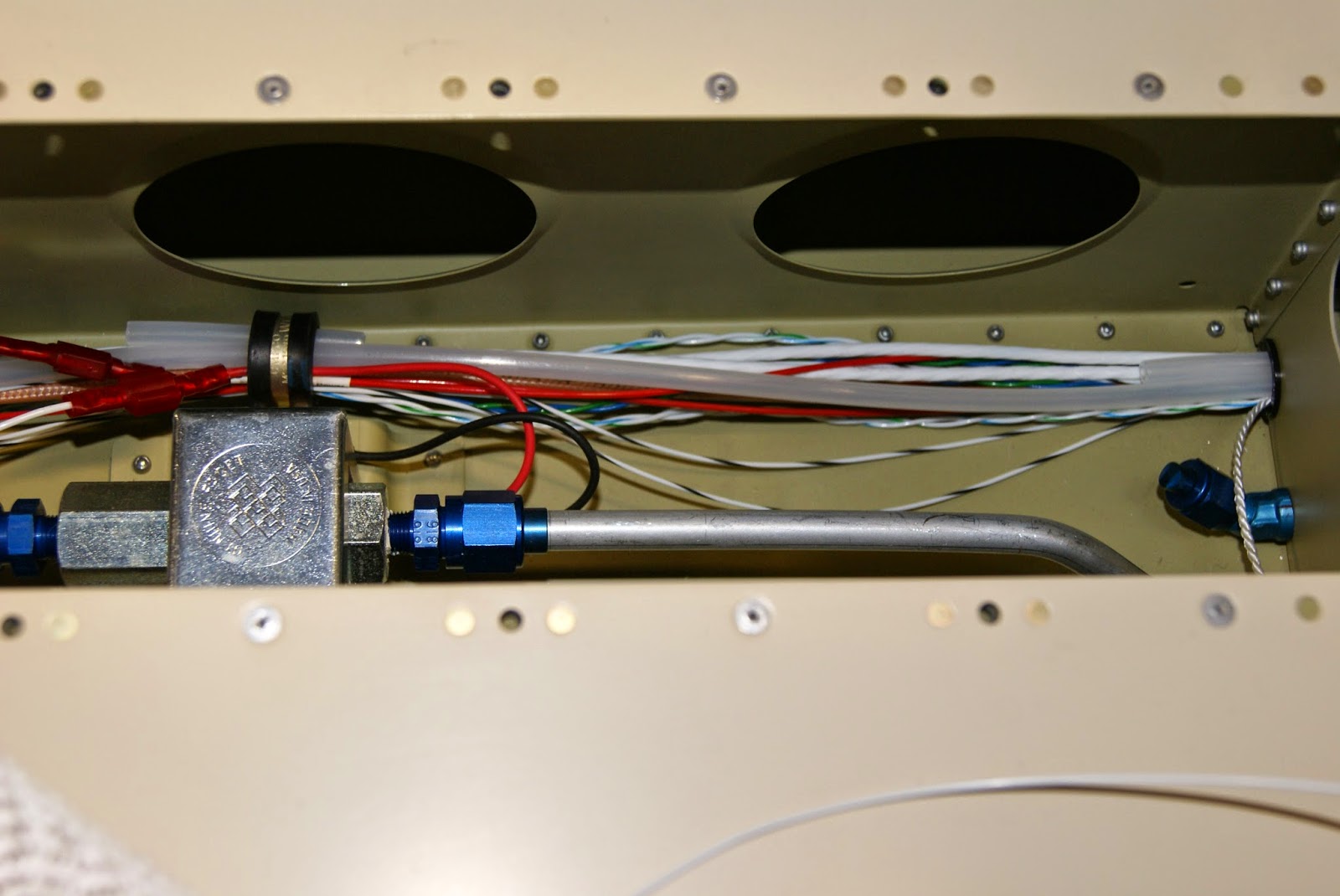 Two of the small pieces of tubing used as guide tubes can be seen here adjacent to the already installed pitot tubing passing through the two wire grommets.

Fortunately, on the forward side of the center channel, there are two wire grommets in each bulkhead. The lower one is really full because of the many extra wires that go up to the center channel conduit so the upper grommet was used to pass the static air tubing. So the upper grommets were used to pass the static air tubing the rest of the way to the instrument panel. 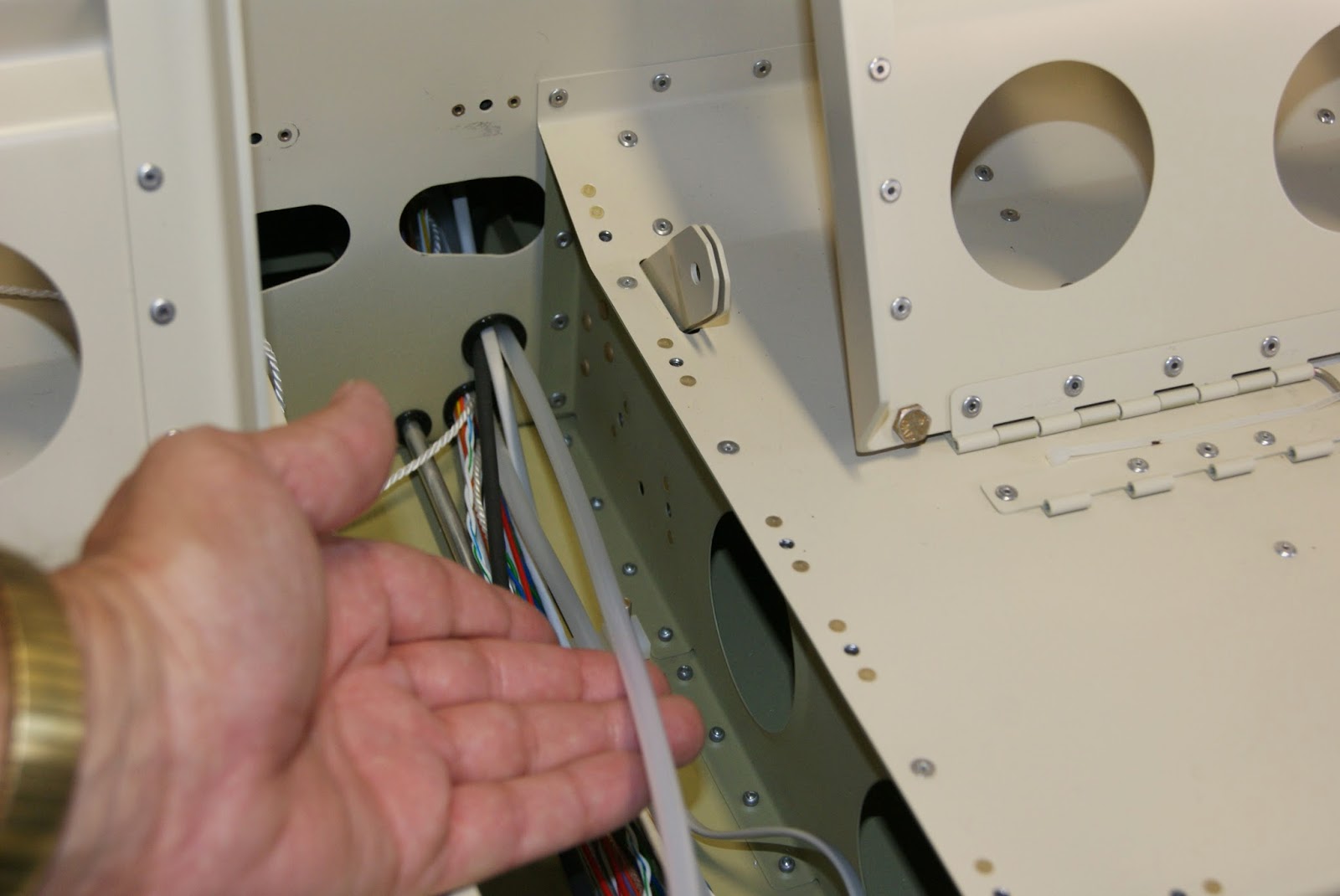 The upper wire grommet on the forward side of the center channel was used to pass the extra static air tubing on its way to the instrument panel. 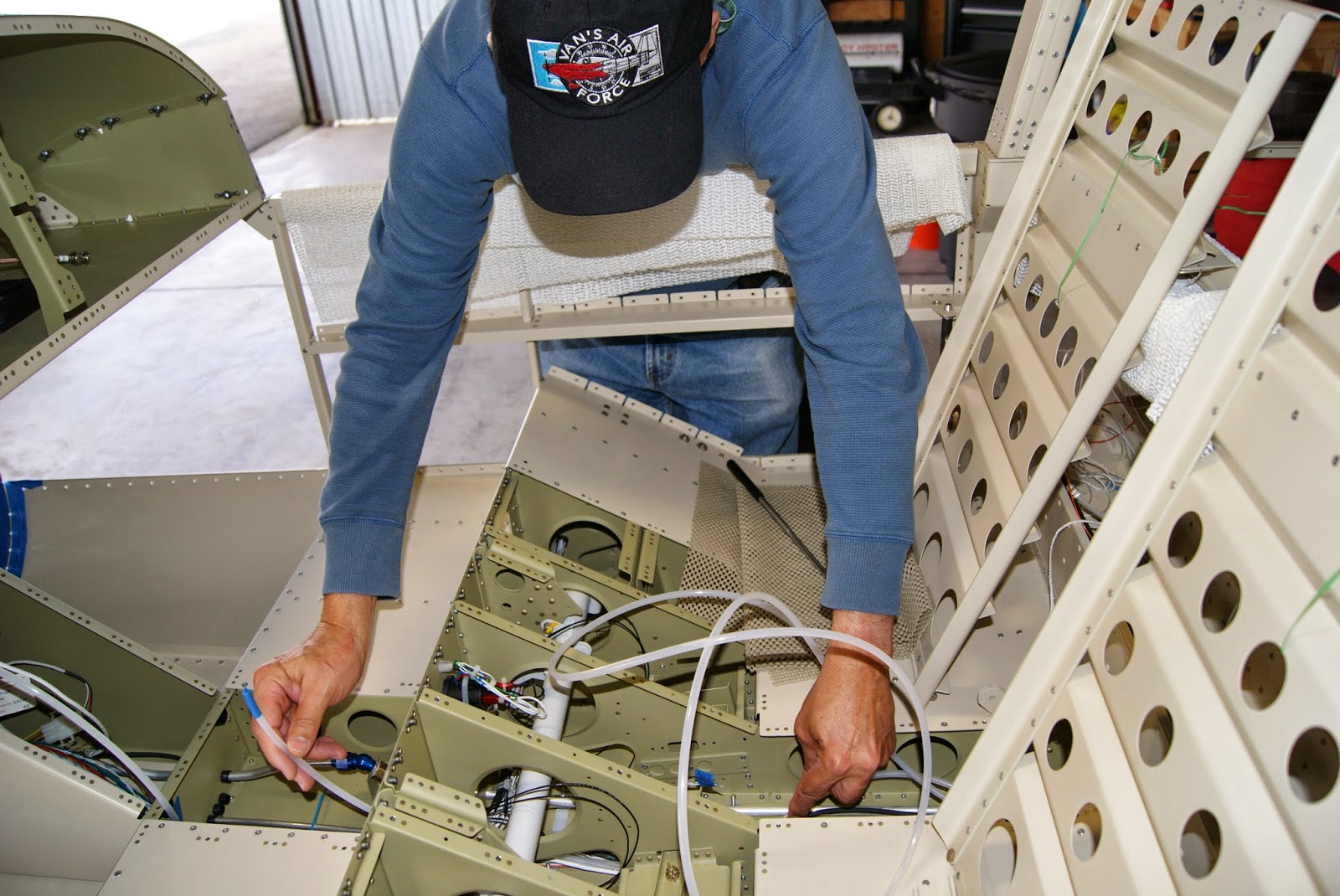 Fishing the extra static air tubing through the center tunnel using the upper grommets in the bulkheads from the center channel forward. 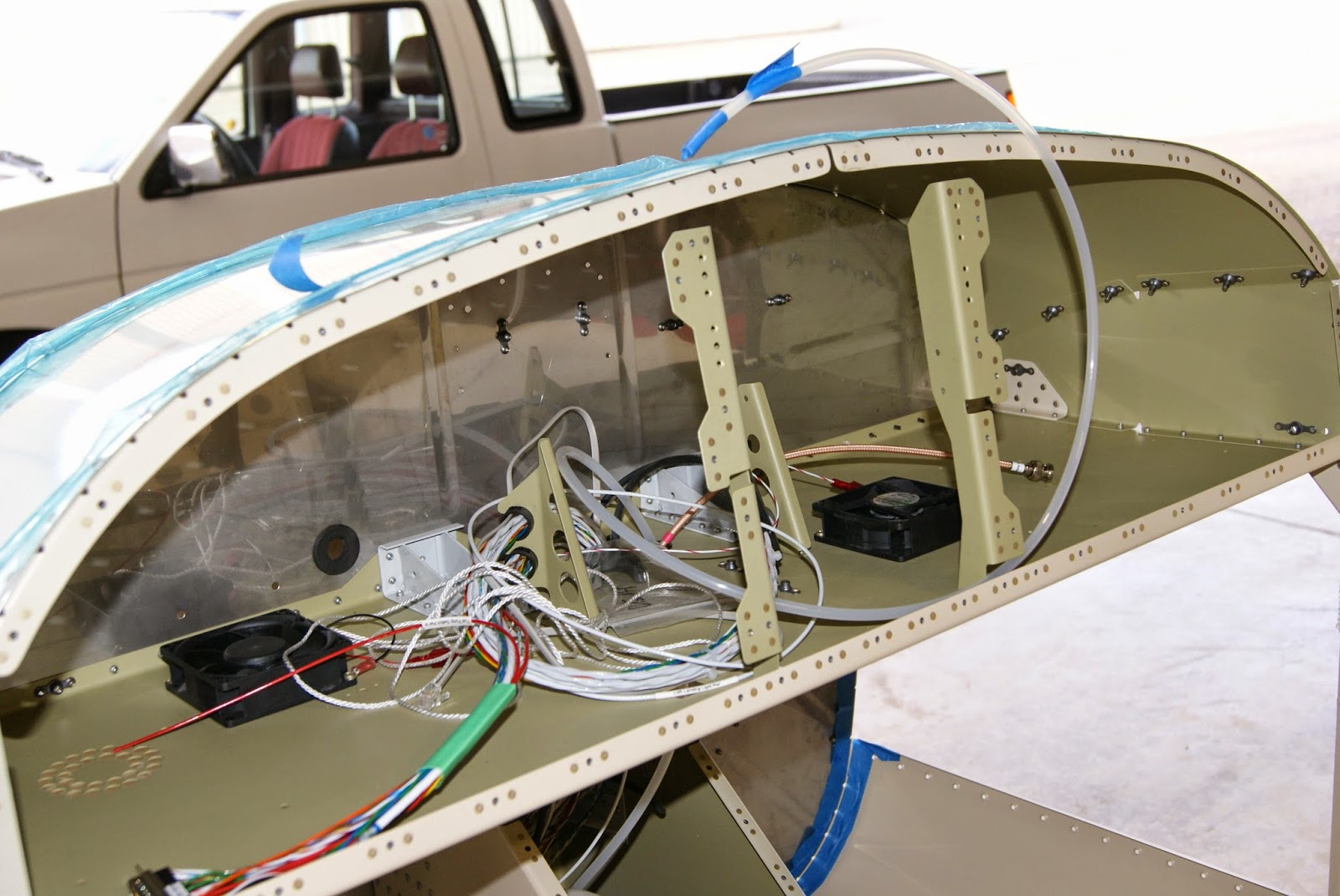 Aft of the fuselage, the extra static air tubing was placed in the same wire grommet as the ADSB antenna cable, routed to the left side of the tail cone and through the existing tire ties. 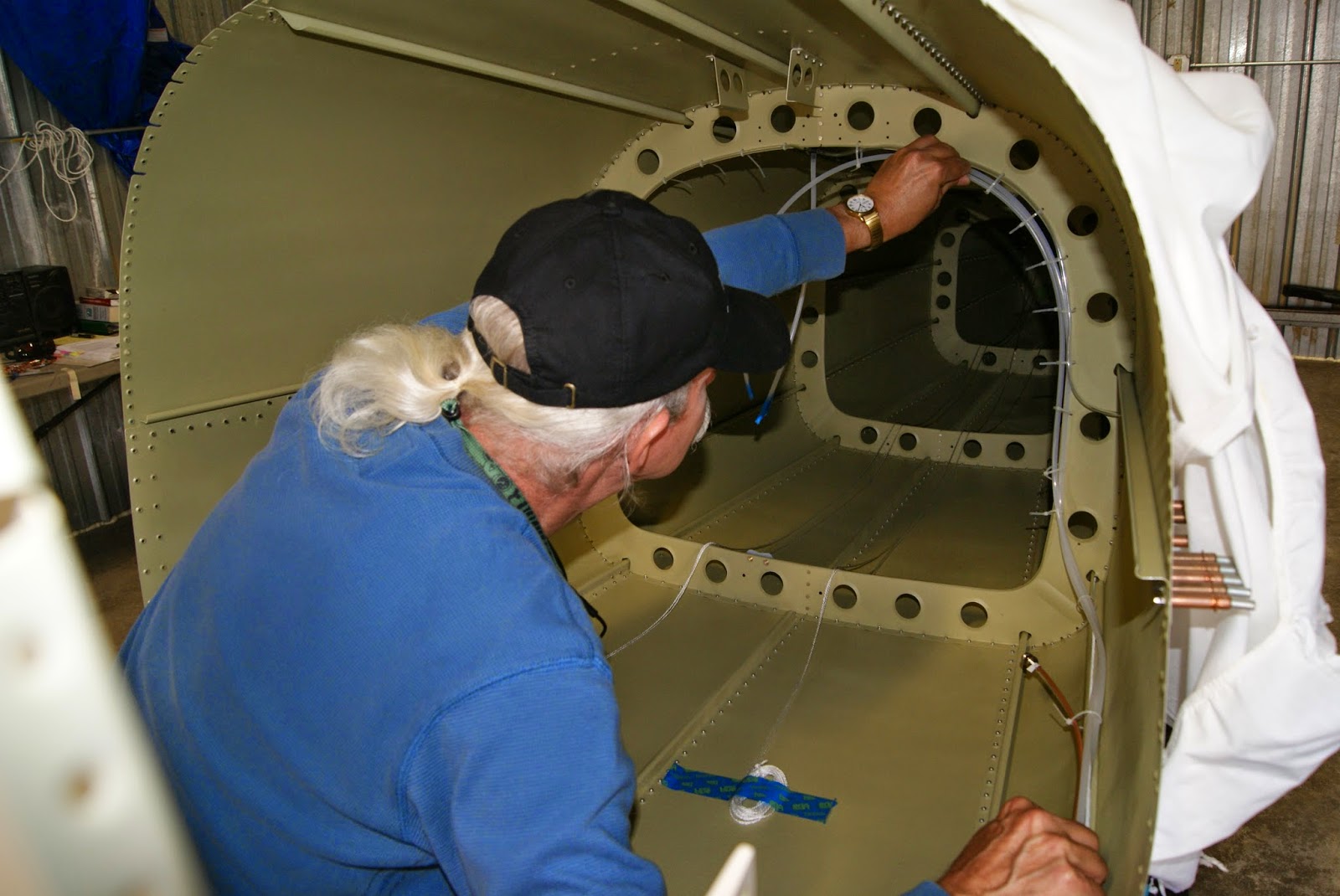 Routing the extra static air tube through the wire ties already on the tail cone for the wiring and pitot tubing.

After finishing the routing of the extra static air tubing from the tail cone to the instrument panel through the center tunnel wire grommets, the routing path for the small Tygon tubing for the AOA was looked at. Because the Tygon tubing used for the AOA indicator is so soft and malleable, decided not to run it into the stuffed wire grommets aft of the center channel for fear of it becoming compressed. Will cover its instillation in the next post after I finalize a good routing for the tubing.
Posted by John at 11:16 PM