After spending most of day of completing errands, was able to spend some productive time in the DOG Aviation production facility.  The F-1240C clip requires fabrication … after pondering a few options, the method finally settled upon was repurposing a drill press tool for the job. The purpose of the F-1240C clip, which ultimately becomes riveted onto the bottom of the F-1240B cover plate, is to secure the hinge pins for the cowling. The ends of the hinge pins are bent to 90 degrees and the clip is slid over the end of the hinge pins to capture them and prevents them from moving. To fabricate the F-1240C clip the plans instruct the builder to bend the clip to 90 degrees to form a V and flatten out the sides so the V is only 3/16" high.

I love repurposing tools and after looking around the shop, decided a set of drill press V blocks would fit the bill for bending the F-1240C clip. The piece of aluminum was bent to shape by compressing one V block into another. 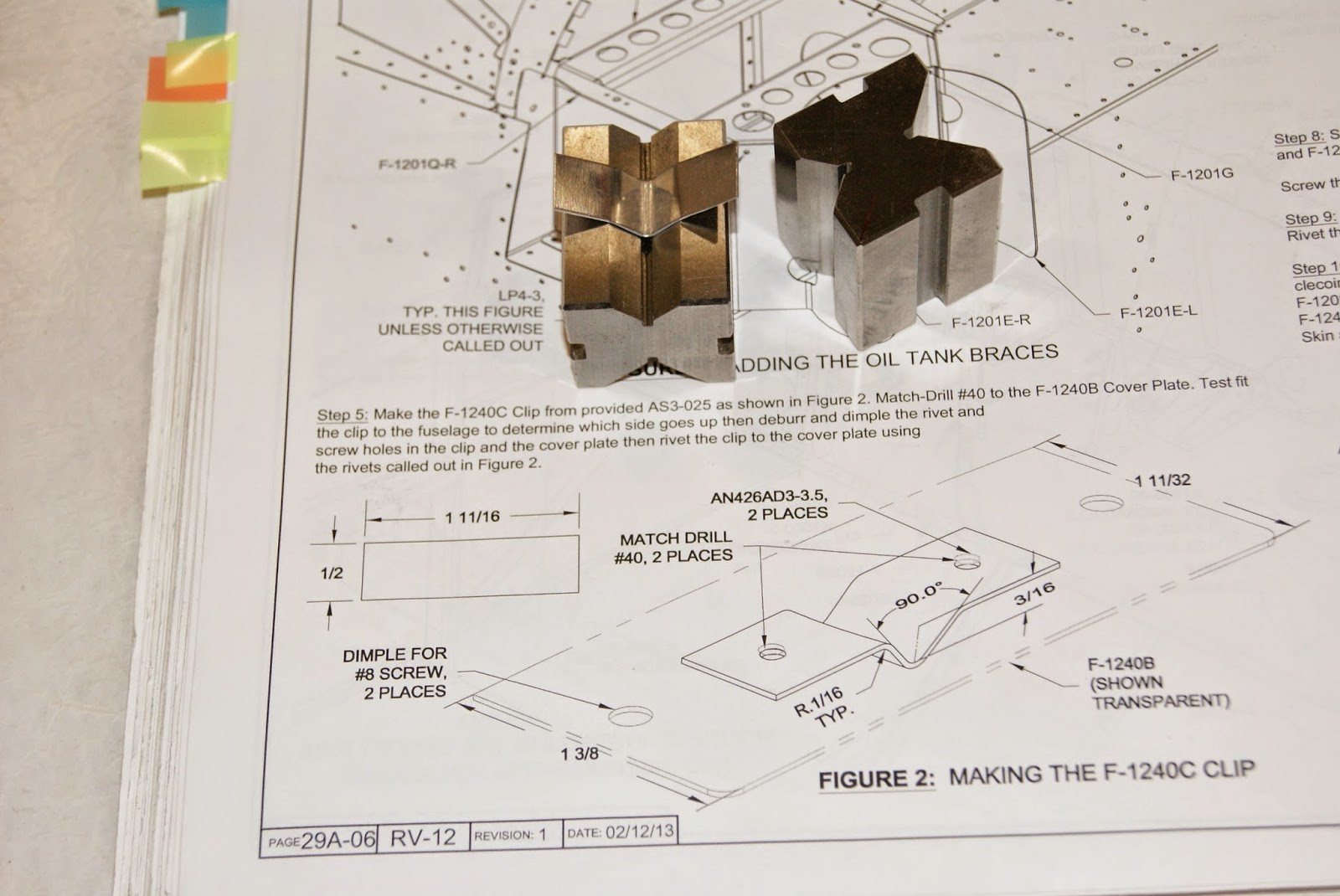 The F-1240C clip after forming the 90 degree bend with the V blocks.

Once the 90 degree bend was formed, the wall of the V block was just about the right height (actually slightly higher) to form the 3/16" bend. The two V blocks were clamped together and the remaining bends were made using the narrow bill of the seaming pliers to flatten out the sides of F-1240C clip onto the V block. 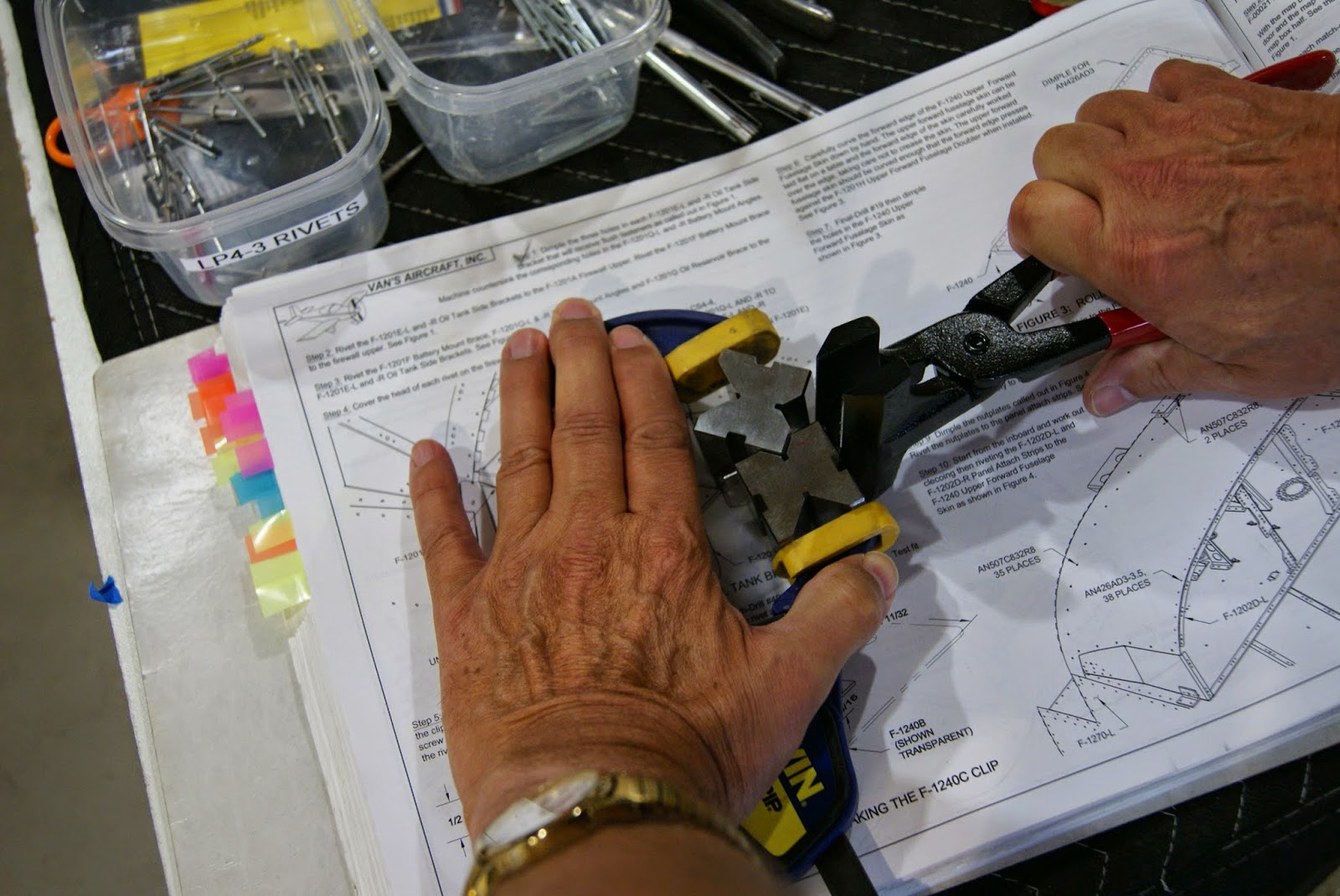 While keeping the two V blocks clamped together, to finish off the clip seaming pliers were used to flatten out the sides of the clip.

Forming the clip as mentioned above was quick and easy. After the F-1240C clip was formed, it was match drilled to the F1240B cover plate. 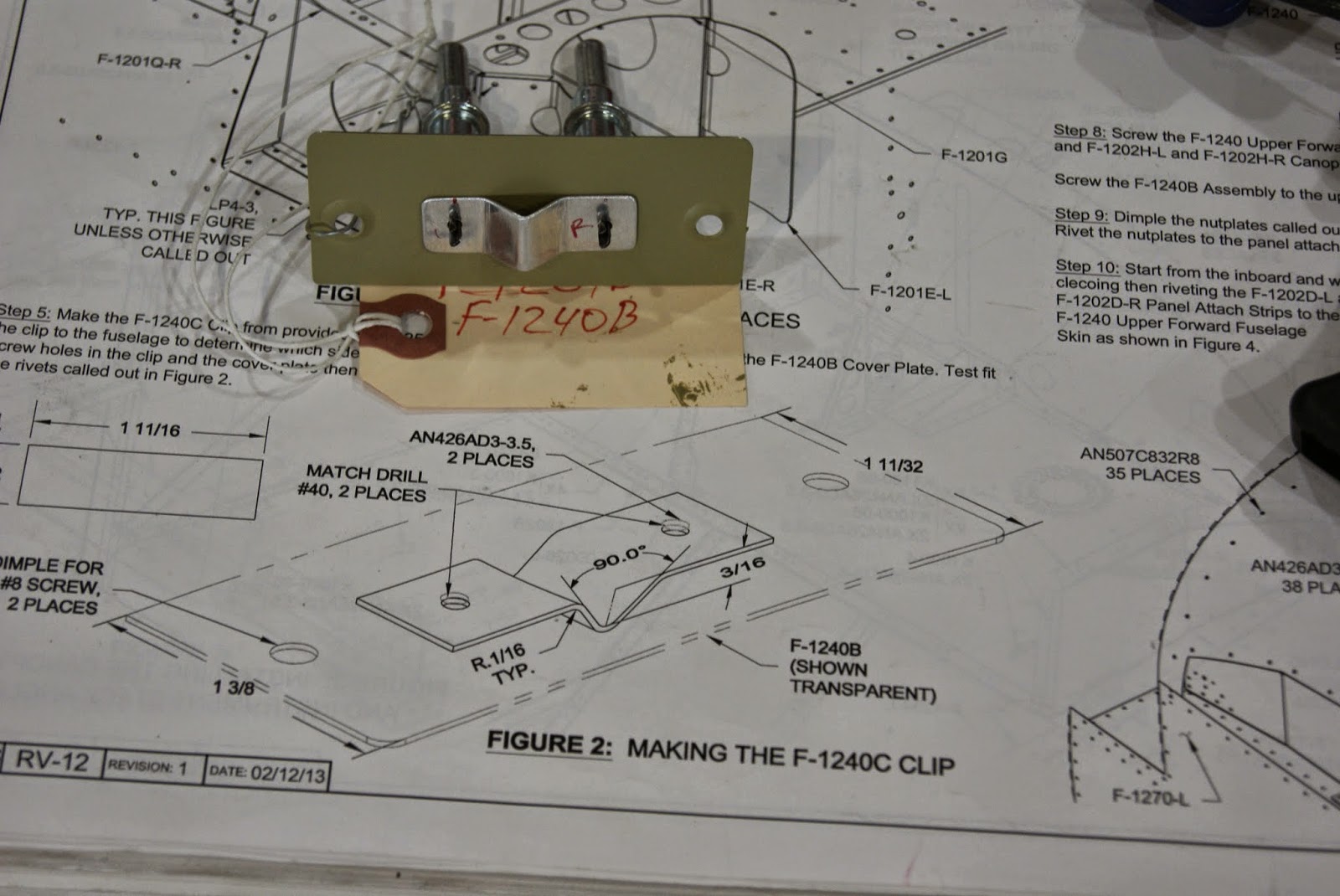 After match drilling the F-1240C clip, the rivet holes in the F-1240B and newly drilled F-1240C clip required dimpling because the clip will be mounted with flush rivets per the instructions … however, prior to riveting it will need to be primed.

The plans say the F-1240 upper forward fuselage skin needs to be placed over the edge of a table so the edge can be rolled by hand to put a small downward curve in the skin. No mention as to where the curve should begin or how much. I posted a question on the forums and one builder said he got good results using the edge braking tool and another worked the outer 1 1/2" edge by hand a little and could not see much difference but the part fit great. That told me the amount necessary is small, so I opted to make two passes with the Cleaveland edge tool which resulted in a nice tight fit once the F-1240 upper forward fuselage skin was fitted. 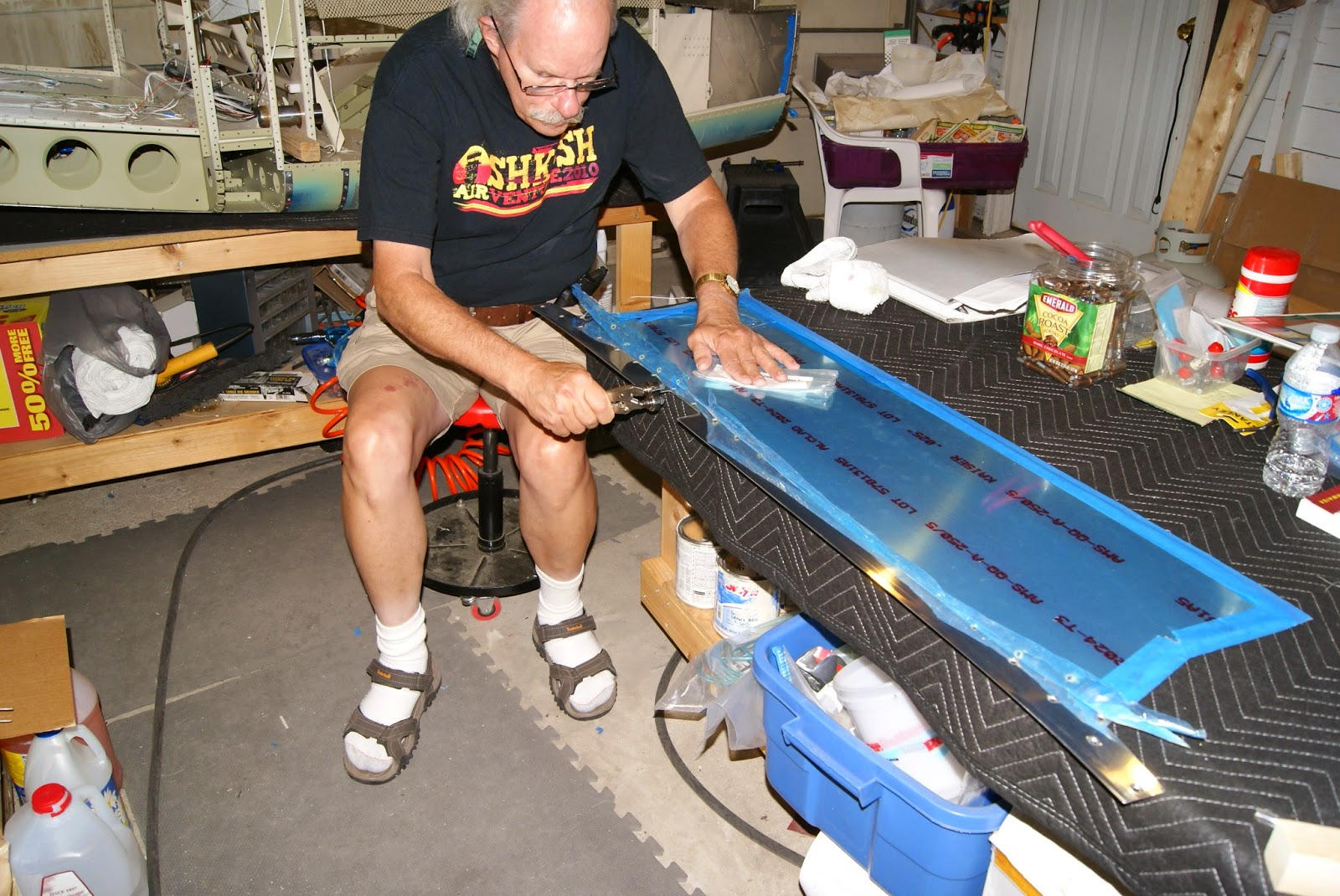 Having already dimpled all the necessary holes in the F-1240 upper forward fuselage skin many months ago, the skin was ready to be screwed in position on the fuselage. The F-1240 skin also performs a second task in that it is also the cover for the instrument panel along with becoming an integral part of the front panel mounting. The F-1202D panel mounting strips are riveted onto to F-1240 skin and receive nutplates for mounting the front panel components. 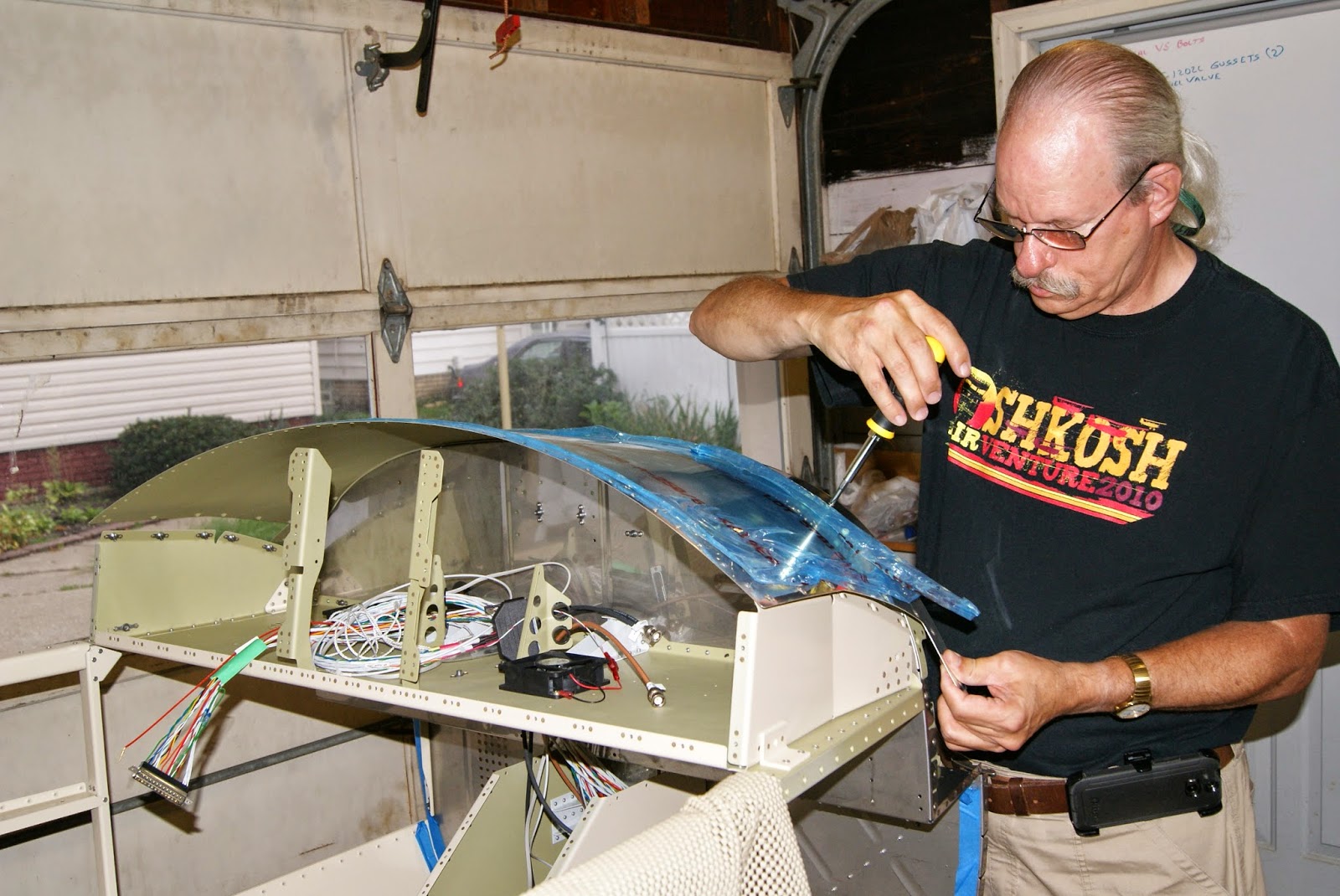 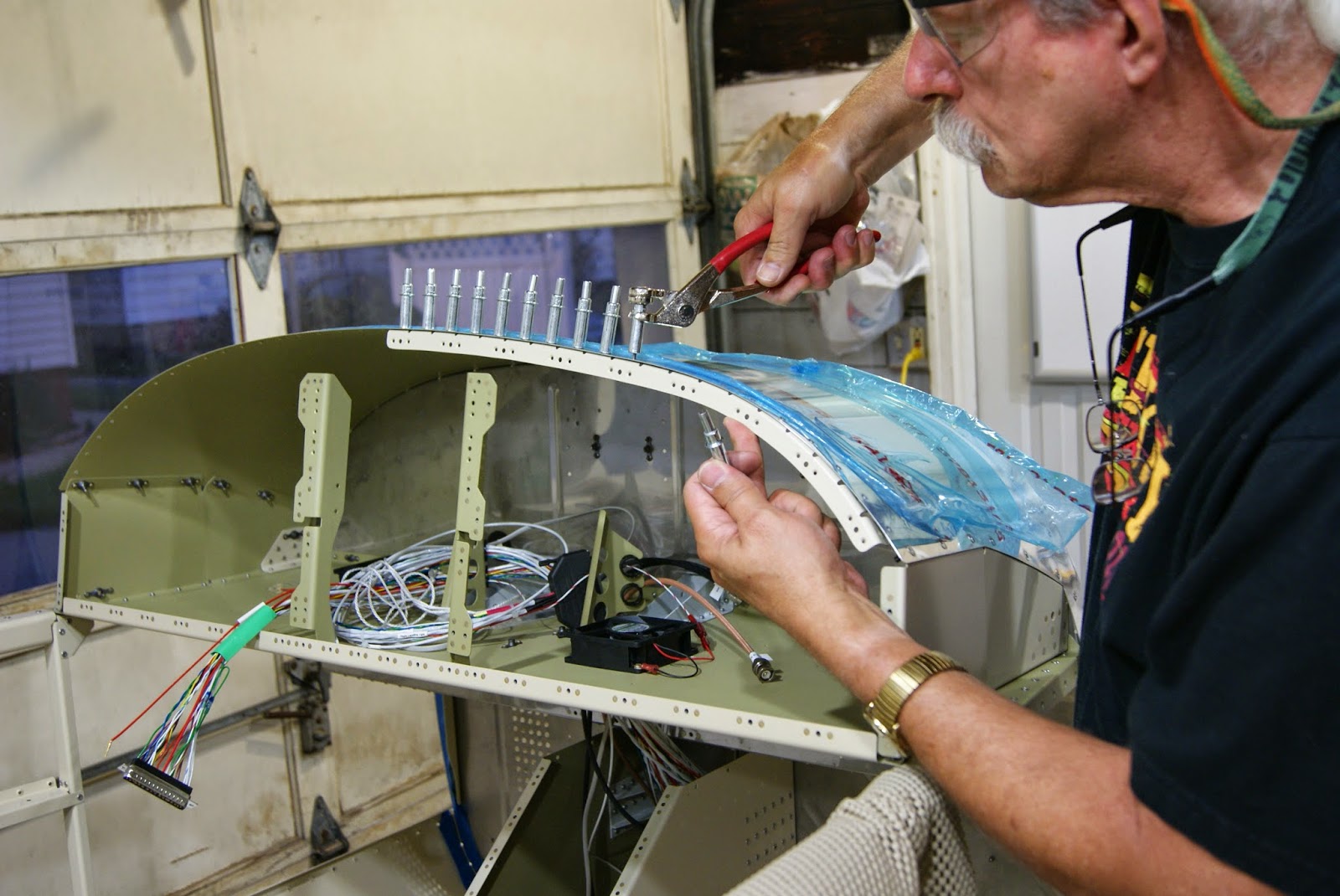 Just after taking the above photo I realized I was getting ahead of myself in that the F-1202D panel mounting strips should have the nutplates installed first … so off it came and decided this was a good time to end the work session.
Posted by John at 11:18 PM