Slowly Getting Settled Into Hangar 45

The entire afternoon and early evening of Sunday was spent settling into DOG Aviation’s new facility in hangar 45. Of course, as with any serious move, establishing a source for music was the first priority … so the boom box and MP3 player were located and hooked up. Music ... check, good lighting …check, steel shelving units in place … check. Time to start unpacking. The power tool workbench and air compressor were the first items worked on. 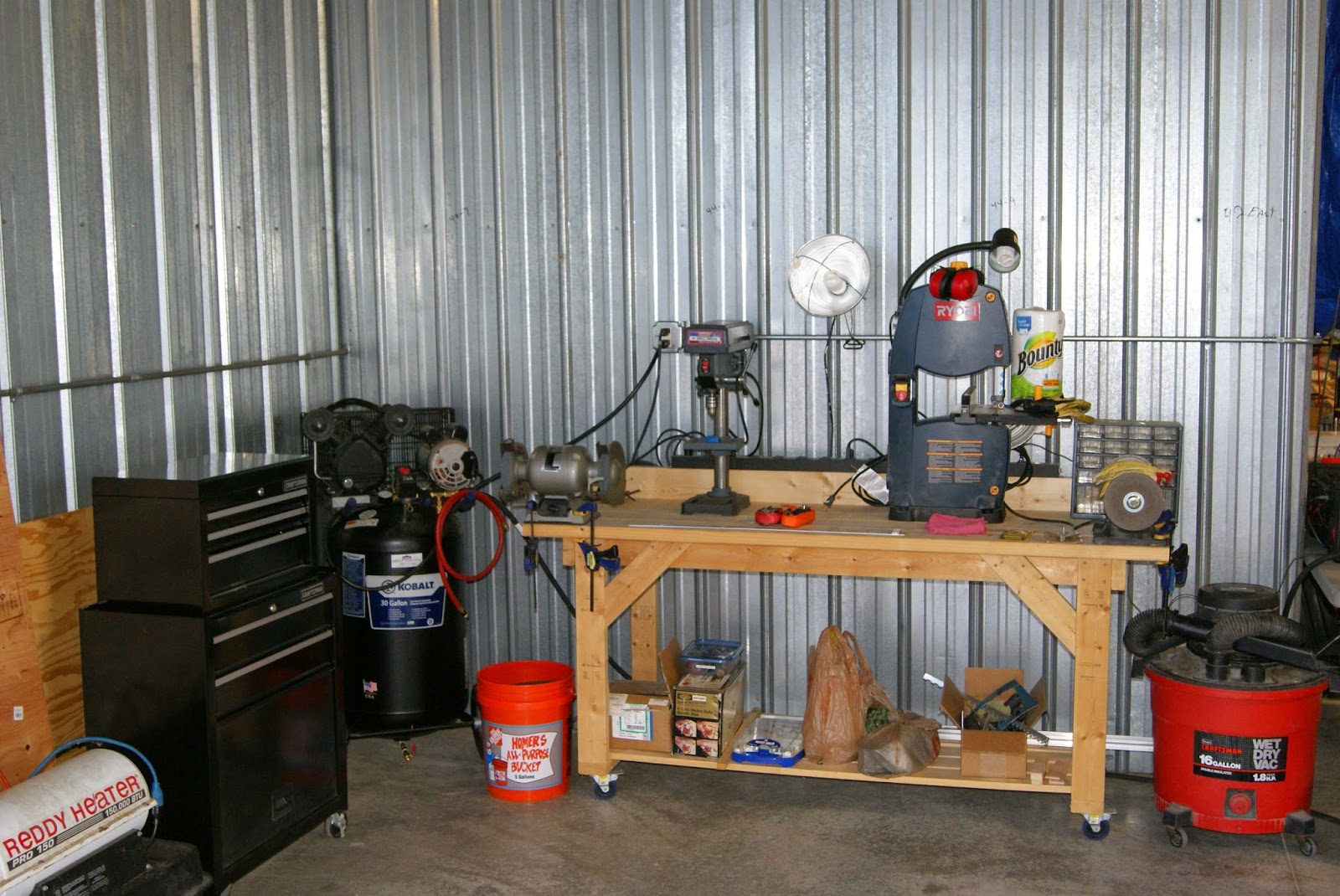 The air compressor and power tool workbench ready for action.

The large fuselage crate which was mostly empty was packed to the gills with items from the shelving under the work benches, painting supplies, chemicals, all the trays of hardware and rivets, plus miscellaneous tools and supplies. So the fuselage crate was attacked next and its contents distributed mostly to the steel shelving unit at the back of the hangar. To make it easier to get to the shelving during the many trips of walking back and forth, the RV-12 tail cone was rolled into a corner of the hangar next to the finishing kit crate. 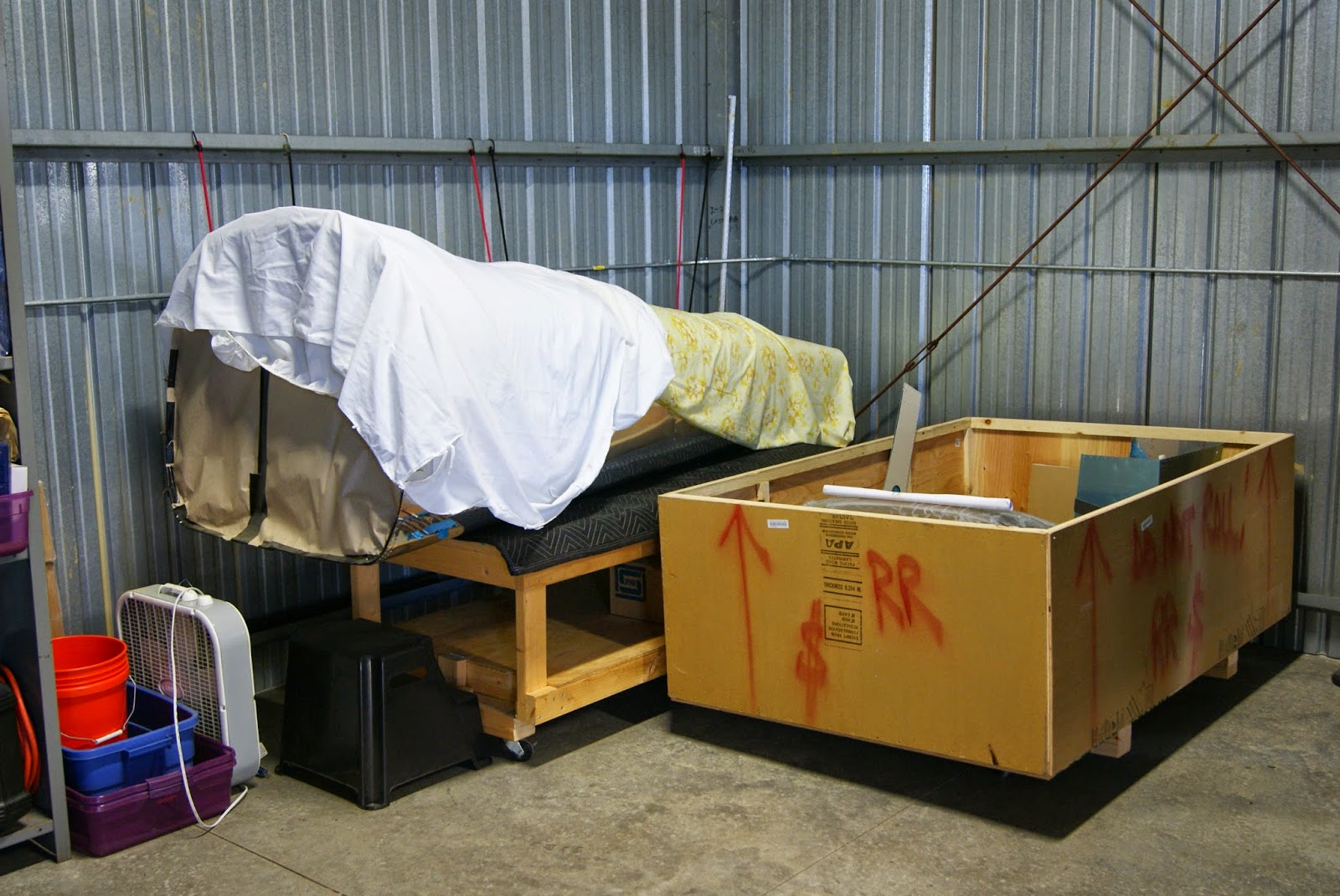 The RV-12 tail cone temporally moved into the corner adjacent to the finishing kit crate during stocking of the shelving units. 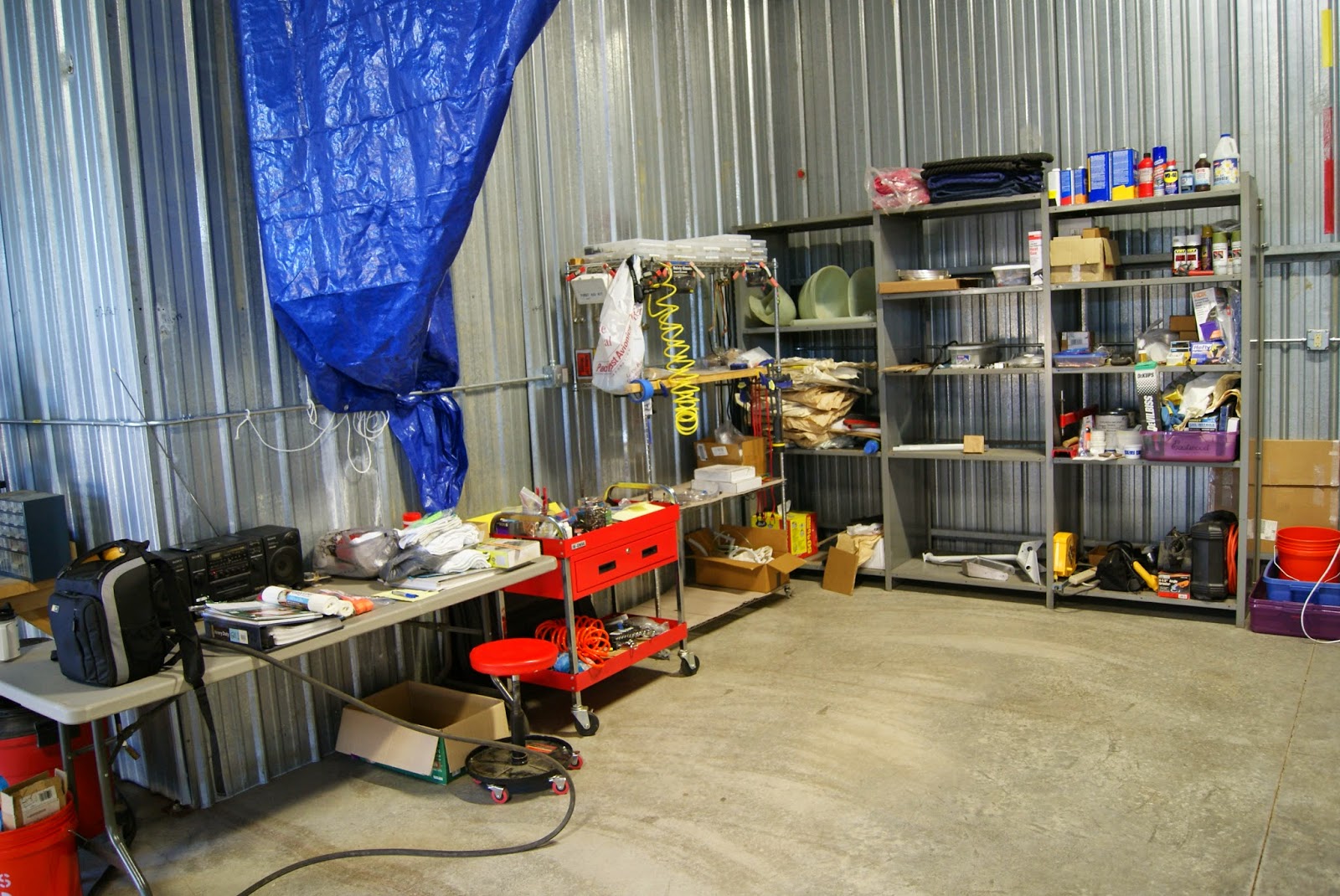 Shelving unit beginning to get fully utilized … the contents of the far right set of shelves came mostly from the fuselage crate and will be mainly for paint/equipment and shop supplies. Rest of the shelves will be used mainly for storing RV-12 parts.

Because the majority of remaining fuselage parts were already primed (and in most cases painted as well),  each part was wrapped in paper and stored in a large storage bin which was placed in the fuselage crate.  There is no hurry at this point in time to unpack those parts, although in the near future I’ll need a few of the pieces that are, fortunately, near the top of the bin. 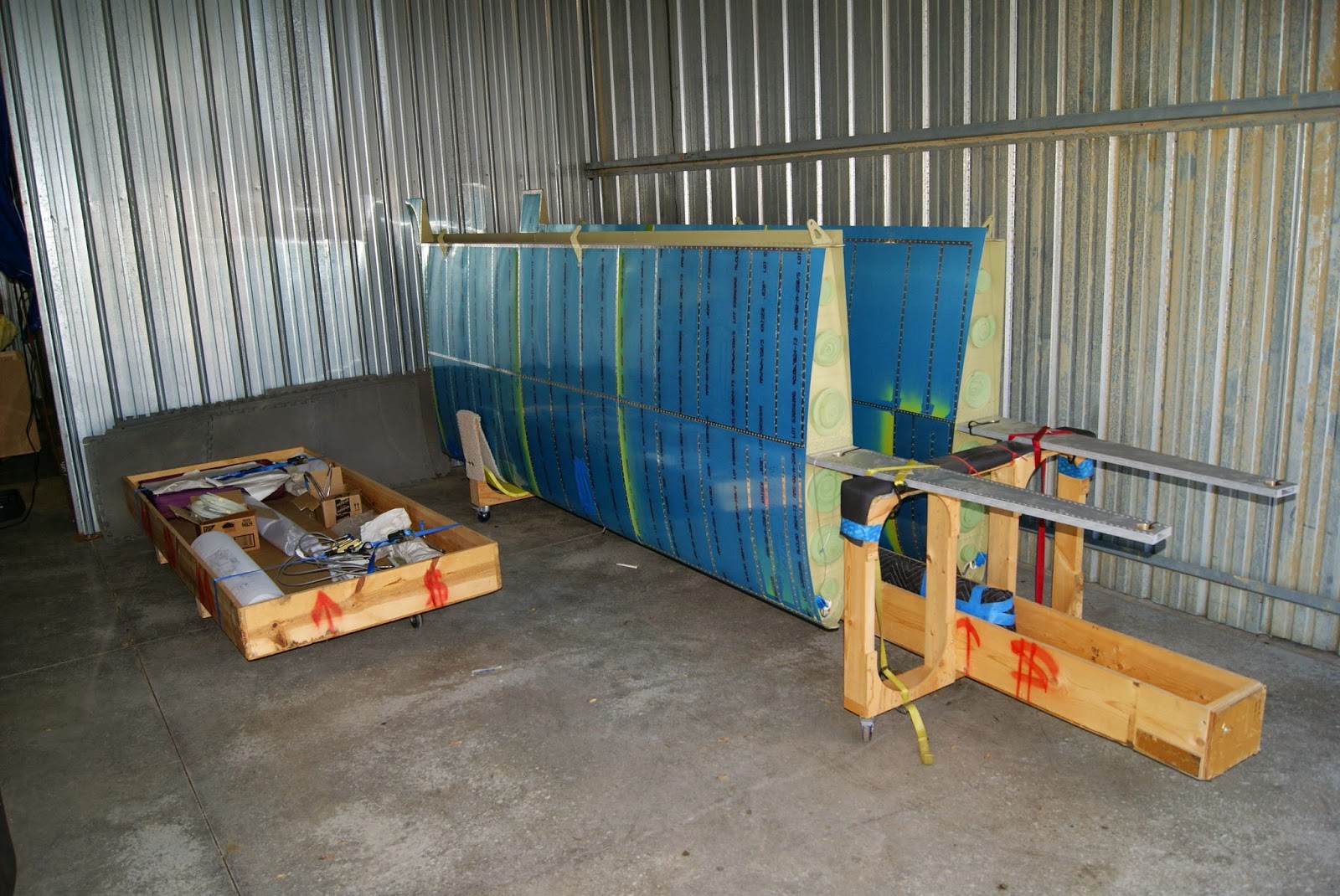 The RV-12 wing caddy adjacent to the fuselage crate mostly unpacked of all the major goodies … except for a remaining storage bin of painted parts wrapped in paper.

Still need to get a little more organized, but by in large the hangar is ready for continuing the assembly of the RV-12. Hoping to put the finishing touches on the shop today. 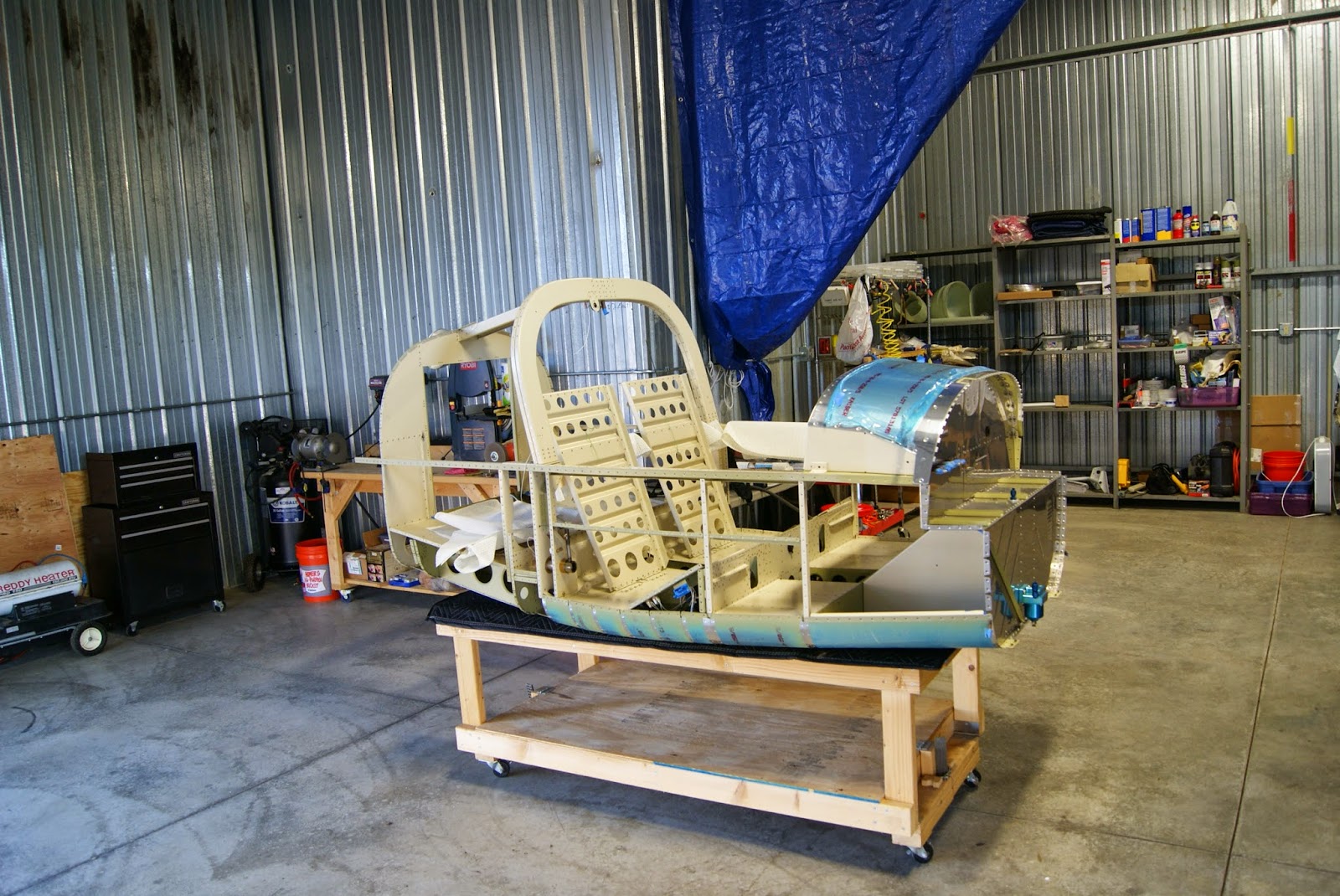 It is so nice to be able to walk around the fuselage without the need to side step!!!
Posted by John at 7:40 AM