No work on the project today but yesterday Mike and I decided to use expanding foam insulation around the perimeter of the hangar walls where they meet the concrete floor. Earlier in the year the floor had a bunch of water on it which was caused by snow piled up at the far end of the hangar row. As the snow melted, the runoff made its way from hangar to hangar including the DOG Aviation hangar. In an effort to make a preemptive strike at eliminating water in the hangar, decided to try sealing the base of the metal hangar walls with expanding foam which will hopefully act as a dam and prevent water from entering from adjacent hangars. So everything that was placed along the walls was pulled out so the floor could be swept and blown with air from Mike’s portable air compressor. 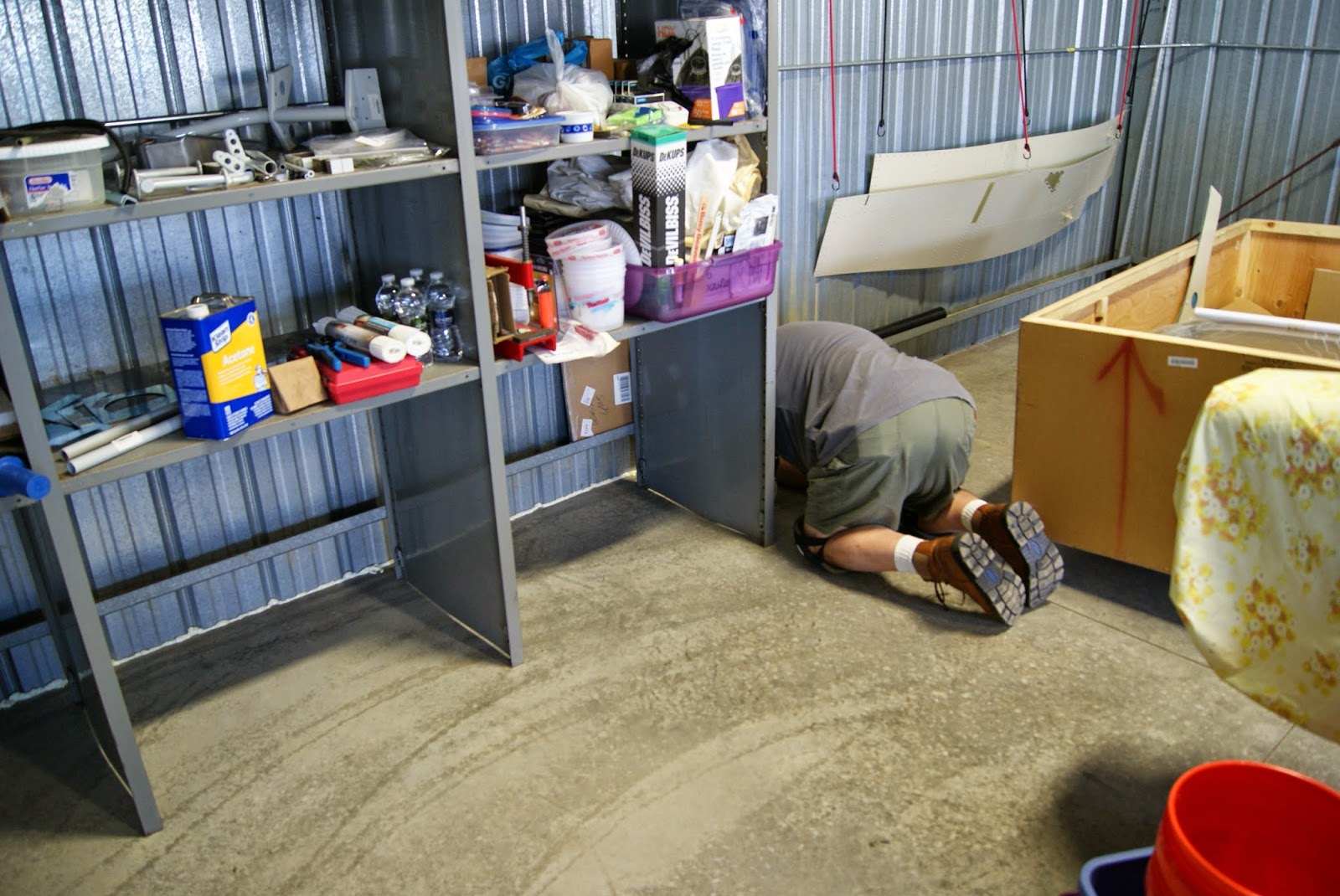 Mike applying the expanding foam to the base of the back wall of the hangar. The treated area can be seen on the left. 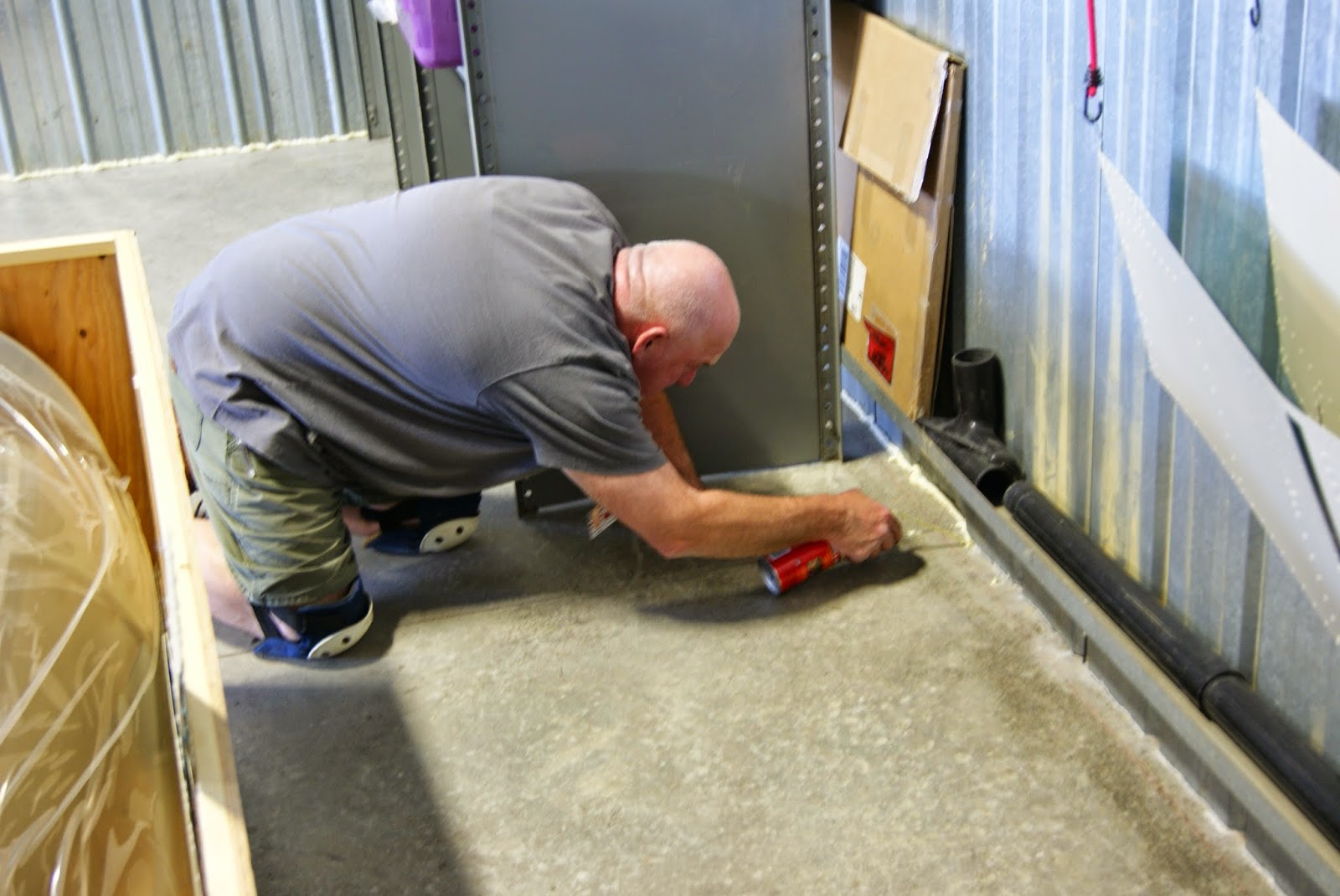 Mike laying out a nice bead of expanding foam along the back wall of the hangar.

After the expanding foam was applied, the shop was straightened out once again and I decided to use the big air compressor for the first time. Plugged it in, turned it on … and it barely began to turn. What? Decided to try another outlet that I know is on another circuit and the air compressor turned a little faster … but still no dice. Bummer. Scotty, I need more power!

Got to thinking about it and it is a 13 amp compressor so it takes more than a little power to get it moving. The circuit is only 12 gauge wire and the wire run goes to the breaker panel at the far end of the hangar row which wire distance is likely around an easy 200 feet. The 12 gauge wire has much more voltage loss than optimum … but one thing is certain … the air compressor will NOT be running on house power.

Guess it is time to go shopping for a small portable generator …that sucks but shy of running a #6 wire, just don’t think there is anything that can be done.

Even though my exuberance was squashed due to the anemic electrical outlets in the hangar, decided to suck it up and make something happen on the RV-12 … so moved the tail cone in close proximity behind the fuselage so the wiring to and from the tail cone could be installed, along with pulling the pitot tube through the fuselage’s center section. My method for doing this is a departure from the Van’s plans which would have the builder doing this with the side skins on … but there is a method to the madness, so to speak. The plan is to install a backup altimeter and airspeed indicator in the RV-12’s instrument panel which will require running a static air tube up to the instrument panel plus there is the angle of attack indicator tubing which needs to be run back to the tail cone. The wire grommets are getting really full and I know there is room for the trim wires and pitot tube … but just in case the static air or AOA tubing won’t fit, by having the side skins off, it will offer options for routing in case the wire grommets get maxed out. 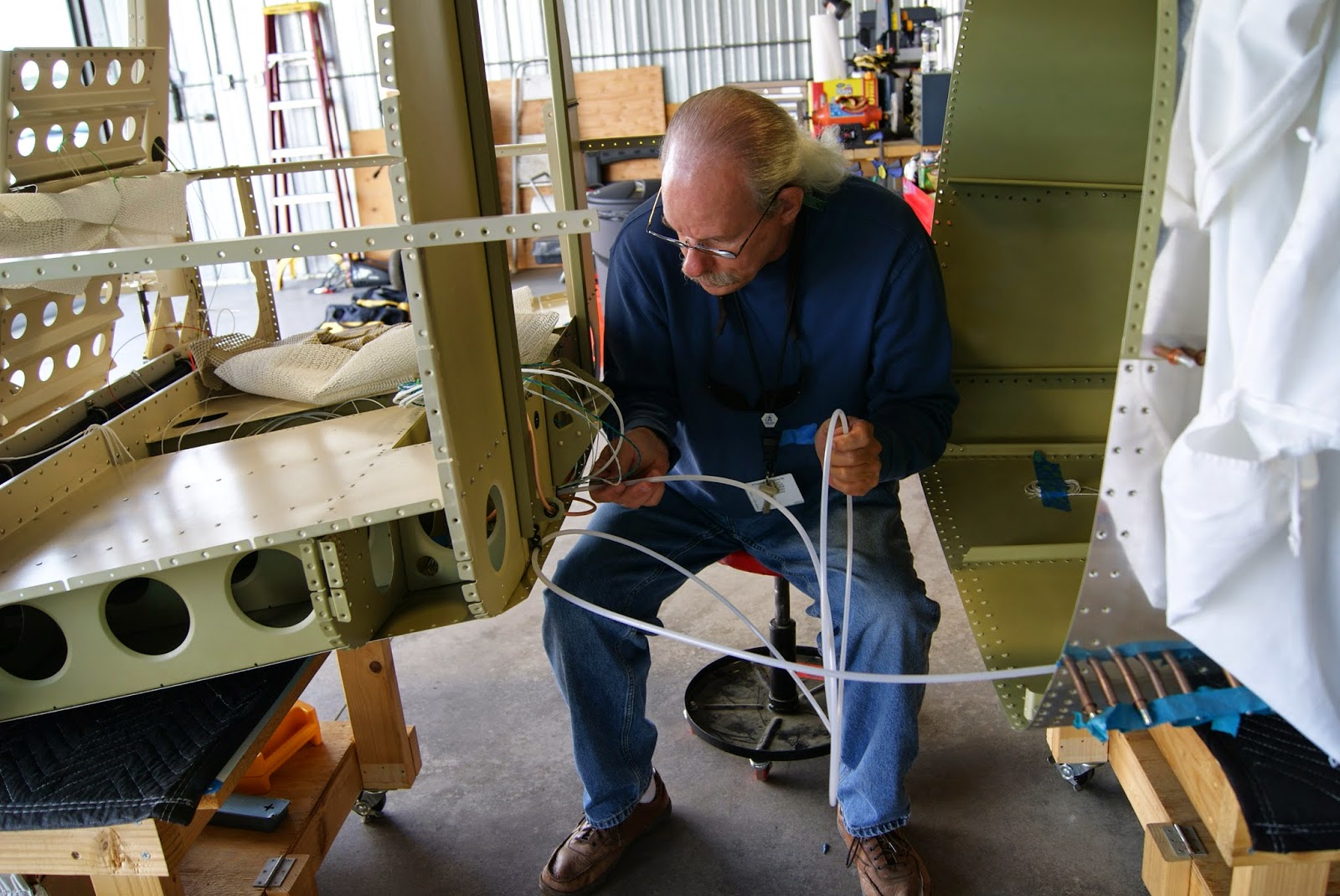 Routing the pitot tube in through the center tunnel wire grommets. 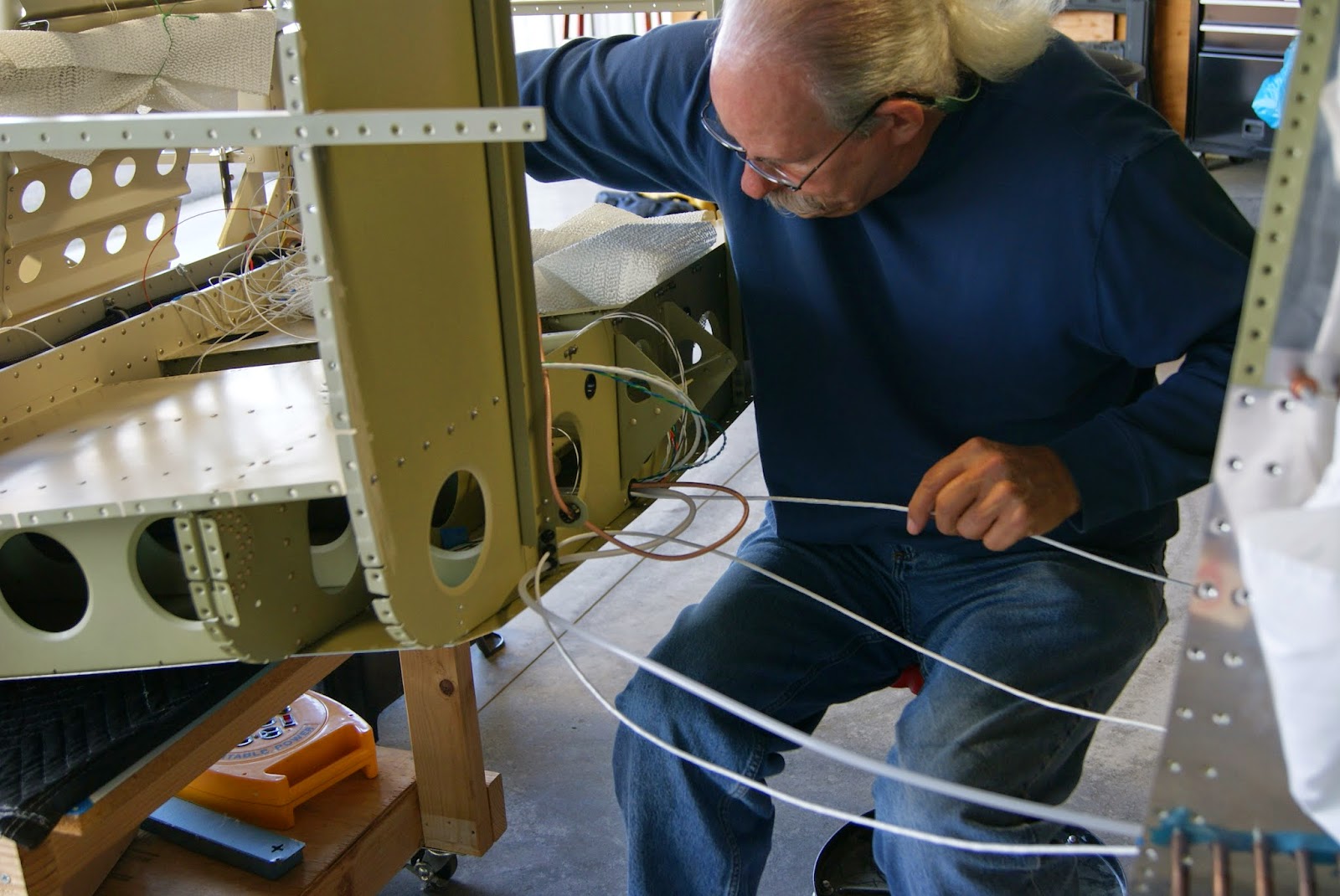 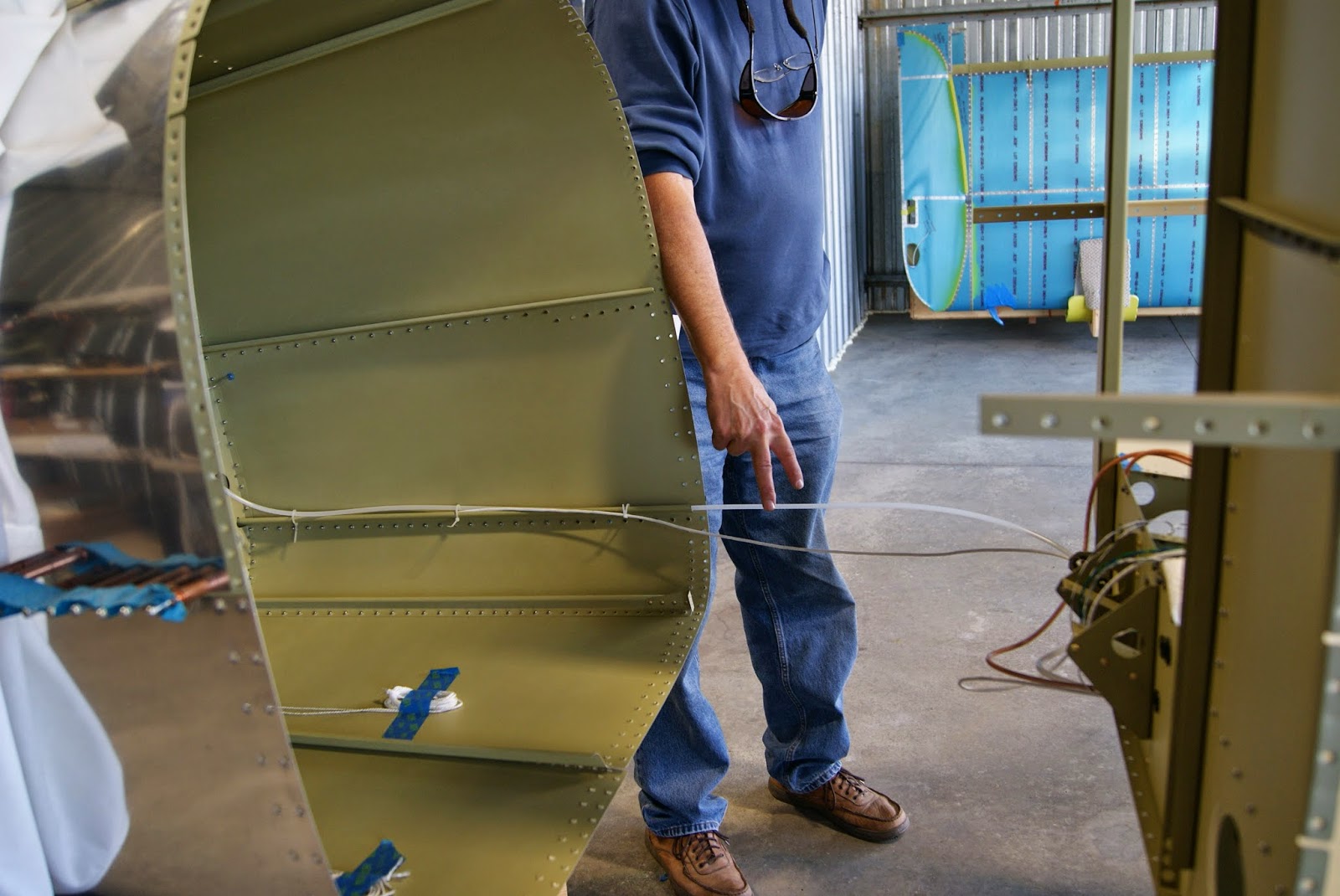 A test piece of the static line was able to fit into the aft grommet on the fuselage which is great news … however, the center channel grommet has one more 18 gauge wire in it so it may not be a piece of cake getting it pulled in through the center tunnel.  Hopefully, will give it a go tomorrow if other obligations get fulfilled in the morning.
Posted by John at 6:17 PM