The fuel tank in the RV-12 has gone through several revisions over the years. One of the latest changes has been to adopt a fuel tank venting system using tubing. In the past, RV-12’s had a fuel cap which required drilling to create an air vent for the fuel tank. This worked fine for venting the tank but has undesired side effects … some RV-12 builders reported getting water in the fuel during heavy rains and even while washing the plane so they have resorted to placing tape over the hole during rains or washing … yet another item to remember - removing the tape prior to flying.

A solution Van’s is including on newer RV-12 kits is the addition of a fuel tank vent system attached directly to the fuel tank. It involves attaching a fitting on the top rear of the fuel tank and running aluminum fuel tubing from the fitting up through a hole near the top of the baggage bulkhead and into the tail cone area. On the tail cone side of the bulkhead is a “T” fitting. One leg of the “T” receives the vent pipe from the fitting on the fuel tank the other leg has aluminum fuel tubing running from the “T” down through a hole in the tail cone’s bottom skin … thus creating the main vent line for the fuel tank. To guard against the possibility of fuel being siphoned out of the tank during steep climbs with a full fuel tank, there is an additional vinyl line attached onto the “T” which serves as a siphon breaker. The new fuel venting system can be seen in the photo below. 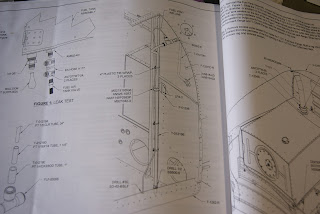 Photo of the plans for instillation of the new venting system for the fuel tank.

The fuel tank top that came with my finishing kit has the hole for the fuel tank vent fitting … however, because the DOG Aviation RV-12 baggage bulkhead and tail cone’s bottom skin were manufactured prior to the new change, they are both missing the necessary holes for the new venting system.  Since I already had the drill and drill bits out from drilling the holes for the landing gear bolts into the fuselage bottom skin, decided now would be a good time to drill the two required holes for the new fuel tank venting system. A tinge of doubt crossed my mind as I gazed upon the wonderful (NOT) drawing Van’s supplied for determining the hole locations as seen below … which, incidentally, is basically useless to use as a drilling guide as drawn. 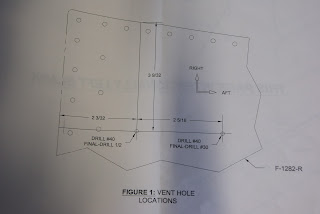 This is the extremely accurate and well drawn drawing Van’s offers builders for determining the fuel vent hole locations.

The measurements in the above drawing are virtually useless if retrofitting a riveted airframe because the builder can not see the edges that are to be used as reference points for the measurements of the hole locations. (Oh, one cannot see the edges from inside the tail cone either because of the way the layers of materials come together at this point).

Time for a rant …. the above drawing is a classic example of a person who makes a perfect drawing (and it is) but obviously has never tried to use their drawing to do the task for which the drawing was intended in the first place. Let me submit exhibit 1 for consideration and comparison to the above drawing. 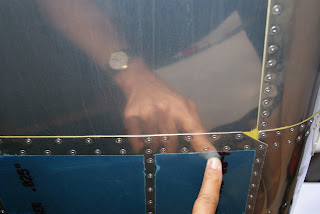 The whole purpose of Van’s drawing for the fuel vent line hole locations is to be used as a guide for builders of RV-12’s to drill the holes for the fuel vents on completed aircraft or partially completed aircraft under construction. Why not just give the builder a useful measurement? Either from the edges on the overlapping skins as seen in the above photo or from the centerline of the rivet lines. Giving measurements from two HIDDEN edges is totally useless.   DUH!!!  Obviously, he who drew the drawing never USED the drawing. 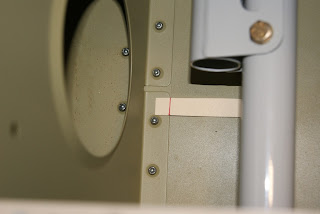 A piece of cardboard was used to measure the distance from the centerline of the row of rivets to the forward edge of the F-1282R skin which can be seen just above the red line. Distance measured was 10/32". 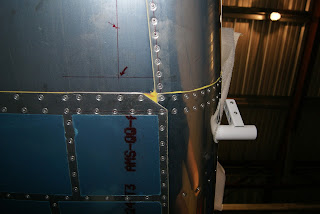 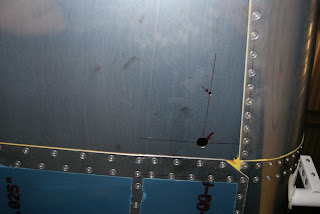