This posting can be disregarded by the majority of RV-12 builders. However, those running a static air line for backup instruments may find the following static air line routing useful. 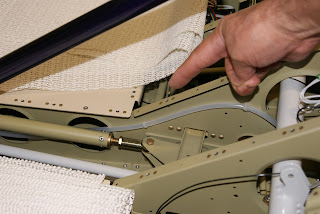 Interference between the left flaperon pushrod and static air line can be clearly seen in this photo.

Moving the static air line was not very difficult but did take up a considerable amount of time. It necessitated crawling back into the cockpit to cut some tie wraps so the static air line could be pulled back through the center tunnel. Not fun.  Fortunately, not all the wire ties needed to be cut because all the wires forward of the fuel flow meter were bundled together first and then the pitot line and extra static line were secured onto the wire bundle with additional wire ties.

To insure the static air line could be routed through the existing wire ties in the vicinity of the rudder pedal tubes and aft of the fuel flow meter, a spare piece of tubing with a drill bit inserted was used to make a splice of sorts. Doing this allowed the static air line to be pushed out of the tie wraps and replaced with a short length of spare tubing to hold the positioning inside the wire ties. This procedure was done at three locations and allowed  removal and replacement of the static air line without removing the rudder pedal assembly or cutting any of the wire ties aft of the fuel flow meter. It worked out quite well. 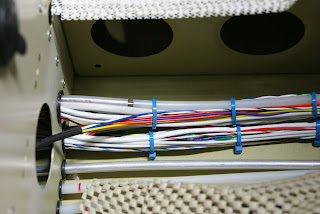 As can be seen in the above photo, a drill bit (pulled out a little for photo clarity) was used to splice the two tubes together so the spare piece of tubing on the right could be used to push out the static air tube on the left without cutting all the wire ties. The reverse was done when the static air line was reinstalled back through all the wire ties. 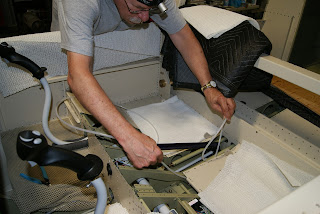 Rerouting the static air line onto the backside of the seat rib adjacent to the center tunnel. 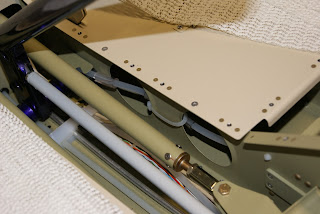 Just forward of the F-1204A bulkhead the static air line now passed through the small lighting hole in the seat rib and is secured in place with a wire tie along with a protective piece of vinyl tubing. 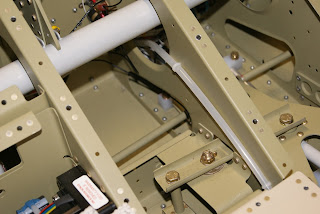 After the static air line was pulled forward through the Adel clamp at the fuel flow meter, it was once again time to crawl into the cockpit, experience comfort at its finest and finish routing the static air line back under the rudder pedal assembly and on through the grommet on the instrument panel bottom. The wire ties that were removed during the removal process were replaced.