The RV-12 Powerplant Crate Has Arrived

It was another exciting moment at DOG Aviation today …. arrival of the sixth and final kit which will complete the RV-12. The  powerplant kit contains the remaining pieces of the giant RV-12 jig saw puzzle and will complete the aircraft. 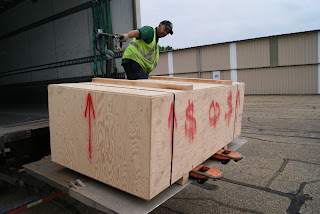 I was not planning on inventorying the crate’s contents today because I wanted to finish up cutting the fiberglass tailcone farings. However the weather did not cooperate and it rained practically all afternoon so, not wanting to cut fiberglass inside the hangar, decided to partake in an early Christmas and dive into the contents of the crate to begin the required parts inventory. 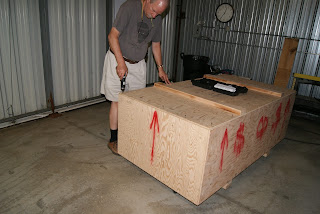 Unscrewing one of the many screws securing the lid onto the powerplant. 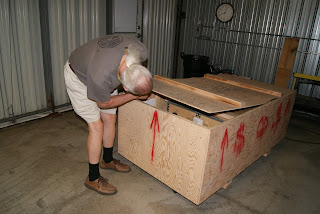 Taking a peak inside the crate did not reveal Jimmy Hoffa’s body – instead, I discovered another large wooden crate inside accompanied by a large cardboard box and of course, lots and lots of packing paper. 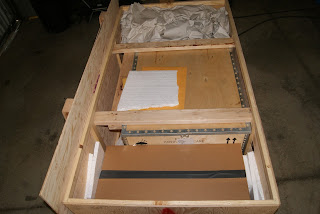 Once the lid of the RV-12’s powerplant crate is removed, this is what the builder will see. 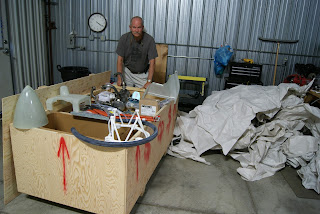 The contents of the cardboard box have been unpacked and placed on top of the engine box for inventory. One thing is for sure ... there is never a shortage of paper around the shop.

After getting most of the parts inventoried except for the small items inside some of the bags, I realized I was missing the propeller. Looking at the inventory list location for the propeller revealed the words “drop ship” or something to that effect. A call placed to Van’s to find out what that meant revealed the propeller was shipped directly from Sensenish …. a couple of phone calls and 10 minutes later, discovered the propeller was sitting at the local UPS hub marked as undeliverable. So immediately made arrangements to go pick it up and headed out to UPS … fortunately getting there just prior to closing time. Needless to say, the inventory did not get completed nor was the engine box opened yet … so there is still more early Christmas to enjoy tomorrow.