Yesterday was a mixed bag at the hangar … did a little riveting, pulled the right rudder cable into the cockpit and also spent time cleaning things up. It was a very calm day so was able to get the hangar floor swept (long over due) and began rearranging the hangar in preparation of mating the wings with the fuselage. It is astounding how much room is required … with the fuselage in the center of the hangar, mating the wings to the fuselage will require pretty much the entire width of the hangar except a couple of feet on either side. This is because in addition to the actual width of the wings, each wing spar needs to go into the fuselage and all the way through to the opposite side … so a lot of extra room is required just to insert them.

While rearranging items in the hangar, I realized my paint drying box still contained the primed lower cowl hinges and associated spacers hanging inside it on hooks. Removed the hinge parts and secured them onto the fuselage with Clecos and began riveting. Another unfinished step finally completed. 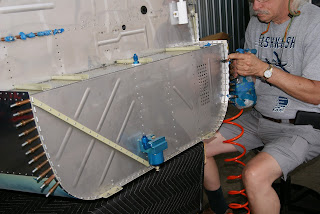 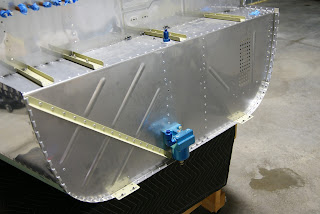 Left and right F-1211 lower cowl hinges riveted in place onto the fuselage.

After the riveting of the lower cowl hinges onto the fuselage was completed, decided to pull in the F-1239 right rudder cable and get it secured. Just as on the left side, the right rudder cable has a plastic sleeve which is secured onto the outboard side of the seat rib that is adjacent to the center tunnel. 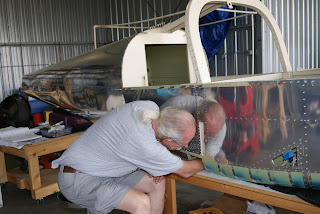 Fishing the F-1239 right rudder cable through the grommet in the center channel bulkhead.

The hardest part about securing the plastic sleeve onto the seat rib is getting to the forward most Adel  clamp’s mounting screw (this was true on the left side but even more so on the right because of the tabs on the control column). The next time this screw is removed it WILL be replaced with either a hex head bolt, Torx or Allan. It is VERY hard to get onto the Philips screw even with a 90 degree Philips …. and, of course, this is also the location Van’s decided they wanted to use as a grounding point for the wiring … so the screw does need to be really tight for good grounding. 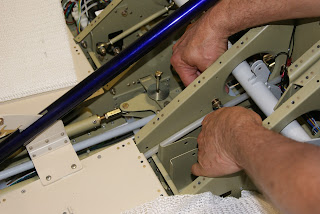 Installing the second of three Adel clamps that secure the plastic sleeve for the right rudder cable onto the seat rib. The problem Adel clamp can be seen in the background to the right of my hands with all the ground wires coming from it (which now need to be dressed with wire ties) … even my stubby screwdriver was too long to get on it. It appears to be in the open, but trying to get a screwdriver or hand on it is another story. 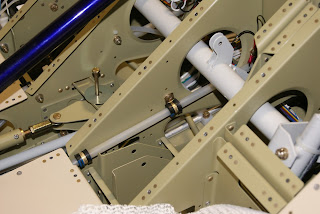