One of the last small tasks remaining before the torque tubes can be installed and match drilled is to install the F-1261 spacers onto the torque tubes. The spacer material comes as one long piece with tapered edges and needs to be cut into four 1 3/4" pieces. 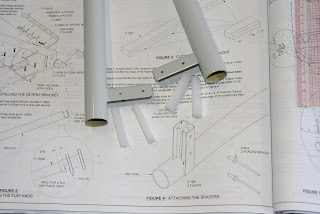 The F-1261 spacers are installed flush to the top of the weldment on the WD-1214 torque tubes then match drilled. These spacers will create a 1/8" slot that the A-1207 actuation bracket on the flaperons will slide into when the wings are mated to the fuselage. There are rivet holes on the weldment that require being #30 match drilled into the spacers. 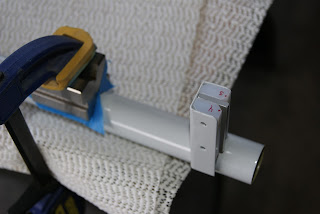 The F-1261 spacers in place in a torque tube and ready for match drilling.

A scrap piece of 1/8" aluminum was used to hold positioning for drilling. The spacers were not drilled deep enough to go into the aluminum so they were final drilled on the bench. Also each spacer was numbered so it could go back to the same location it was match drilled. Once all the holes were drilled through the spacers, ONLY the holes in the spacers are enlarged to #12 … not the rivet holes in the weldment on the torque tube. This will allow room for a rivet to expand inside the spacer and hold it snug. 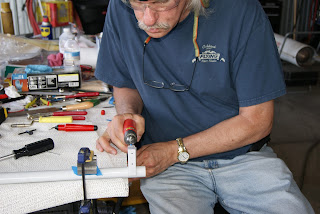 Match drilling the rivet holes on the WD-1214 weldment into the F-1261 spacers. 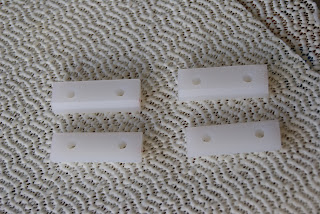 The #30 holes in all four spacers were enlarged to a final size of #12.


Not wanting to only rely on a friction fit, Van’s instructs the builder to also place a thin layer of epoxy on the F-1261 spacers prior to riveting them. This is where the wheels fell off … when I retrieved the epoxy, the packaging had hardener all over the inside. Apparently, last year when the epoxy was last used to seal the magnets into the spar pin plunger, I must have tightened the caps too tightly splitting the end the cap on the tube of hardener. Not wanting to use epoxy from an open tube, had to go out and get fresh batch of epoxy. In the mean while began working on with the rudder cables which I will document in an upcoming posting.

A day later, armed with fresh JB Weld epoxy, the F-1261 spacers were permanently affixed onto the WD-1214 flaperon torque tubes with epoxy and rivets. After the mating surfaces received a thin coating of epoxy, the F-1261 spacers were carefully inserted into the weldment on the torque tube and positioned flush with the top of the weldment. The 1/8" spacer was inserted to hold positioning. I also put a little epoxy around the rivet as well before inserting it into the hole. 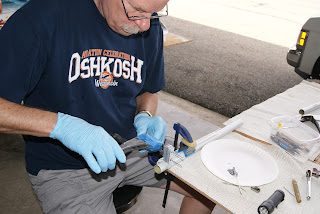 Using a hand rivet puller to set LP4-3 pop rivets which will expand inside the #12 hole drilled in the F-1261 spacers. 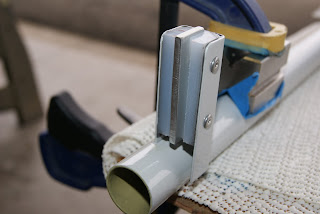 Completed instillation of the F-1261 spacers onto the weldment of one of the WD-1214 flaperon torque tubes with a 1/8" thick chunk of aluminum in place to hold positioning while the epoxy cures.

After riveting the spacers in place, the chunk of aluminum was removed and any tiny amounts of epoxy that got on it were removed then it was reinserted to hold positioning while the epoxy cured. 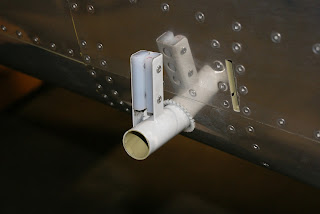 Right WD-1214 flaperon torque tube installed and ready for match drilling when the wings are mated to the fuselage … this should occur in the very near future.


Prior to mating the wings and match drilling the flaperon torque tubes the plans instruct the builder to lock the flaperon mixer assembly in a neutral position by dropping an AN3-21A bolt through a special set of holes in the flaperon mixer assembly. Hummmm where is that AN3-21A bolt … it is not in the parts bin … not even a place for it. Looking on the packing list reveled Van’s does not include this in the kit … guess because it is not really a permanent part of the airplane. Anyway, I remembered there were a couple of very long AN3 bolts that came with the wheel pants kit … they are AN3-40A so they were plenty long enough to go through all the holes in the flaperon mixer assembly to lock up the controls at a position for neutral flaperons. Getting the bolt through all the layers of material is a tight fit so placed some lube on the bolt plus a big washer that will aid in pulling the bolt out. 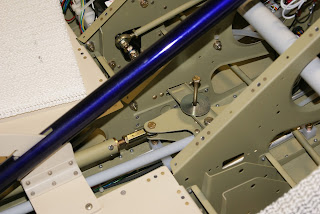 An AN3-40A bolt was borrowed from the wheel pants kit and used along with a big washer (an aid for removing the tight fitting bolt) to lock the flaperon mixer assembly in a flaperon neutral position.


Got to thinking … gee, if the controls are locked in the neutral position for the drilling of the flaperon torque tubes then, in theory, the control sticks should be straight up and down and they were not … each stick had a slightly different tilt. Hope I did not go off the deep end here but decided to adjust the control stick linkages as best as possible so they are close to being straight. Made adjustments to the threaded rod ends at the flaperon mixer because they were the easiest to get to with wrenches. The pilot side was tightened up 3 turns and the co-pilot side was loosened 2 turns. It is not quite perfect but close enough that it no longer bothers me. Time will tell if this was a good move at this point or not. 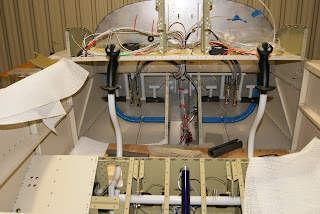 With the flaperon mixer assembly locked in the neutral position, after making some adjustments, the control sticks are now in the ball park and look more or less vertical.
Posted by John at 9:07 PM