Yesterday was another joyous and momentous occasion in the evolution of the DOG Aviation RV-12 … in that the wings were successfully mated to the fuselage for the first time. It was another all hands on deck moment and with the assistance of Bernie, and team Mike (Mike T. & Mike K.) we were able to perform the initial trial fitting of the wings to the fuselage. Thanks for the assistance guys ... could not have done this without all your help.

Prior to installing the wings, a final inspection of the center channel area and correct positioning of the F-1204M rollers were verified. The rollers can be installed backwards so wanted to verify the SMALL step on the roller is in line with the slot the spar will be slid into. 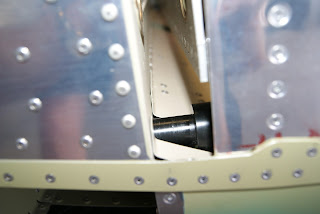 Verifying the small step on the F-1204M roller is in line with the slot for the spar … this is good. The wing spar will roll on this roller as the wing is being inserted into the fuselage. 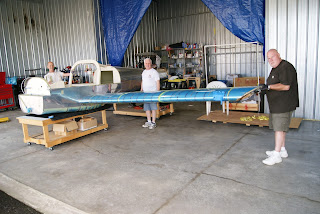 Left wing an inch or so shy of being fully seated. Helpers from right to left - Mike T., Bernie and Mike K. 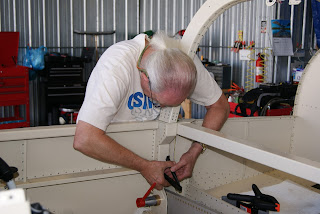 Using a nibbling tool to remove a 1/16" of material from the bottom of the right F-1204H bulkhead cap.

Once the interference issue with the bulkhead caps was resolved, both wings were successfully installed. There was a little hassle getting the spar pins to go all the way through the spars … it is a tight fit and requires a little grease along with some finessing … not to mention some gentle persuasion from a soft faced mallet. A few light taps got the spar pins moving as the wings were being giggled. 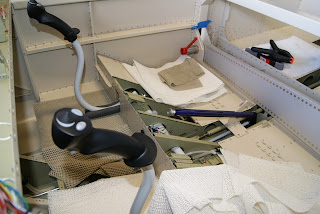 Left wing installed and the spar pin (painted red) on the right side is keeping the left spar held in position and ready for the right wing to be installed. 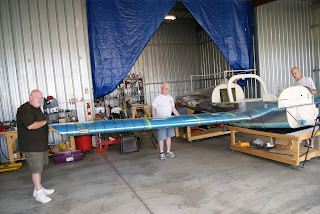 Instillation of the right wing went quite smooth after trimming the bottom of the right F-1204H bulkhead cap. 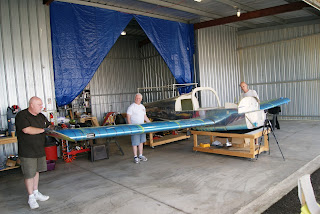 Successful test fitting of both wings on the DOG Aviation RV-12. It was smiles all around as it is beginning to look a lot like an airplane. Unfortunately, both wings need to come off to install the flaperons.

After both wings were successfully installed, a fair amount of time was spent “taking it all in” before removing the wings so the flaperons could be permanently installed onto the wings. 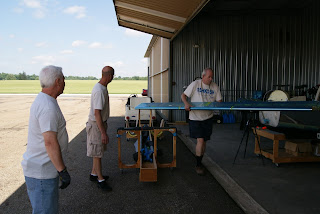 Removing the left flaperon from the wing cradle. 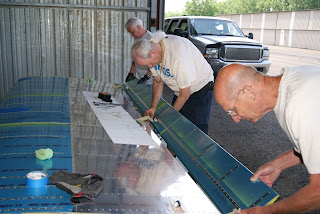 Mike K., myself and Bernie aligning the left flaperon to the left wing so it could be bolted in place. 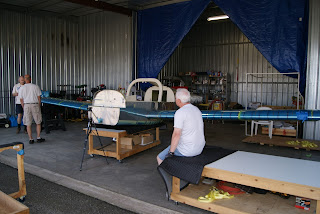 Bernie, Mike K. and myself taking in the moment … both wings reinstalled, this time with flaperons attached and now ready for the procedure to match drill the flaperon torque tubes. 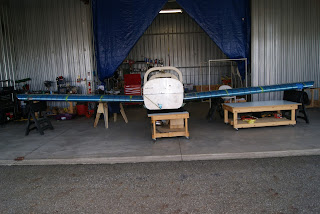 All that is missing is the engine … and that should be arriving within the next week or two. 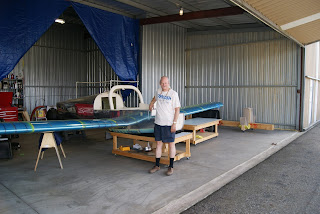 Both wings complete with flaperons attached to the fuselage, nothing damaged, nobody hurt ... a proud moment. 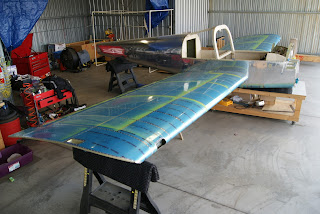 Ready for flaperon drooping and drilling of flaperon torque tubes.