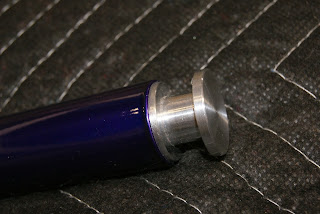 Initial trial fitting of the VR-110 flap knob revealed the knob would require a little sanding before the lower ring would fit snuggly into the WD-1213 flap handle. 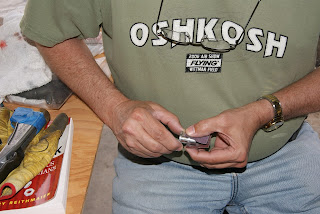 Using 120 grit sandpaper to remove a little material from the lower ring on the VA-110 flap knob. 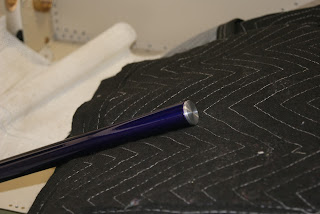 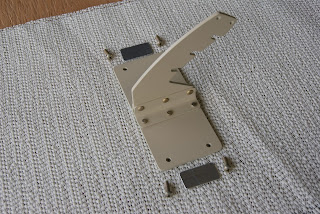 F-1266 flap detent assembly and the two .025" spacers that are to be temporarily placed under it to obtain the correct spacing necessary for future measurements.


Here is where I ran into a little trouble … nothing major. The flap handle tube needs to slide deep into the VA-110 knob so the overall length of the assembly can be determined.  Mine would not even begin to slide into the knob. Thinking it was likely a primer issue, a scrap piece of unprimed tubing was located and interestingly, it too would not fit into the VA-110 knob. Not wanting to sand away primer from the tubing, decided to go about it the hard way (what a shock) and remove material from the inside of the knob. Sandpaper was wrapped around a socket and the hole in the knob was slooooowly enlarged after a ton of hand twisting and running the knob back and forth on the palm of my hand to make it spin. 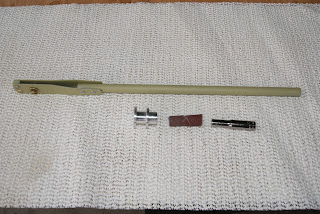 The hole in the VA-110 knob was enlarged so the flap handle tube could fit into it by wrapping sandpaper around a socket and inserting it into the hole and sanding away the excess material. 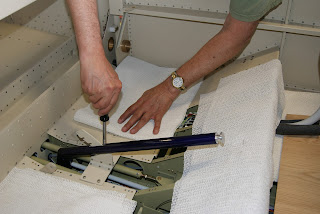 Securing the F-1266 flap detent assembly onto the seat floors.

Viewing the photo above, it appears the flap handle knob is positioned correctly in the tube … and it is. However, only by accident, it was discovered the fork inside the tube was slightly dragging on the inside of the flap handle tube just aft of the slot … so the fork was not fully seated forward into the slots on the detent bracket. (Assuming this was caused by a small amount of powder coating entering through the slot).  The plans say the lower ring on the knob should be flush with the outer edge of the flap handle tube. In my case it was … but only because the fork was hanging up in the vicinity of the slot.  A Scotch-Brite wheel was used to dress up a high spot on the spacers riveted onto the fork assembly. This allowed the fork to move forward and fully seat into the slots in the detent bracket … which, of course, changed the position of the knob by pushing it out of the tube by an additional 3/32". To obtain the correct knob to flap handle fit, it was necessary to remove 3/32" from the F-1260 flap handle tube (as suggested in the plans) prior to drilling the knob for riveting.

Builder note: When working with the knob suggest using a thin coating of lubricant so the knob can be easily pulled back off the flap handle tube after test fitting so it can be trimmed. Plus, the assembly will need to be pulled apart again after drilling the rivet hole so the parts can be properly deburred. Corrosion X was used here because it creates a slick thin film and will offer protection as well. 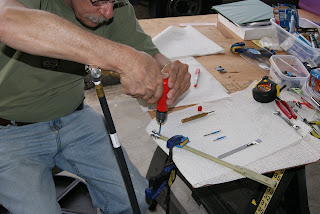 Drilling the rivet hole that will permanently secure the VA-110 knob onto the F-1260 flap handle tube/fork assembly. 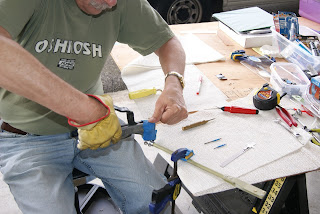 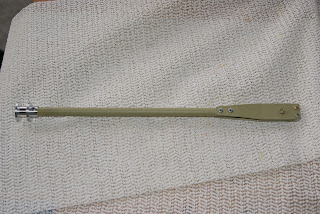 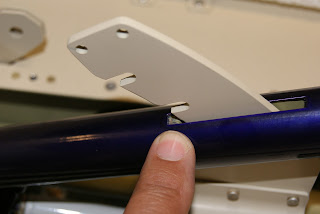 When properly seated in a detent, the three spacers at the aft end of the fork can be seen almost entirely when looking through the slot in the flap handle. 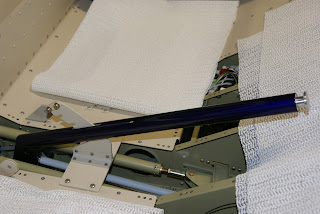 Completed flap handle assembly with the stop screwed in place.

The completed flap handle assembly moves smoothly and freely. The fork seats into all three detents and locks positively, without any binding.
Posted by John at 8:14 AM