The euphoria of having both wings on the DOG Aviation RV-12 was short lived … 24 hours in fact. Prior to removing the wings so the flaperon torque tubes and torque arms could be removed from the aircraft for final drilling, the fuselage side skin to wing gap was measured and marked on the wing. The plans call for a 1/8" of gap between the side skins and the inboard wing skin. While on a creeper under the wing it was discovered both the lower inboard left and right wing skins were touching the F-1270D side skin doubler. The interference was not enough to wrinkle the skin but there was some pressure on the skins … which may have contributed a little to the tight fit of the spar pins. Forgot to take a photo of the interference but the red line in the photo below shows the skin doubler ... this is the general area on both sides that the wing skin to fuselage interference was witnessed. This is not surprising because the side skin doubler plates were retrofits and not part of the original RV-12 design. 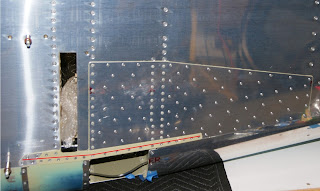 Red line is drawn on the F-1270D side skin doubler which was the surface that was interfering with the lower skins on both wings.

After marking the 1/8" gap on both wings, it was a sad moment as the wings came off so the F-1215 flaperon torque arms and F-1214 torque tubes could be removed for final drilling. (Will likely keep the wings off until the majority of the construction is completed). The flaperon torque arms and torque tubes were reassembled on the bench with the spacer in place along with the clamp. The previously match drilled holes are to remain secured with Clecos while the holes on the bottom are match drilled to #30. 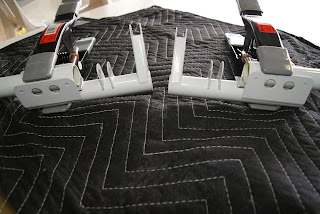 F-1215 flaperon torque arms and F-1214 torque tubes secured with Clecos. The 1/16" spacer is in place and the assembly is clamped prior to drilling the remaining two small holes on the bottom of each torque arm. 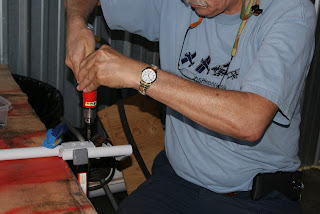 Once the bottom holes in both assemblies were match drilled to #30 the holes were incrementally increased first to #19, then final drilled to the required #12.  To assure good alignment, the drilling was done from the top down and out the bottom. After the first hole is final drilled to #12 a bolt should be inserted when drilling the remaining hole. 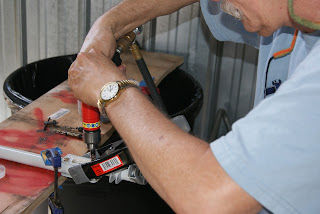 Looking closely one can see a bolt is holding positioning wile the other hole is drilled.

The parts were taken apart, deburred then placed back in the RV-12 and bolted in position. After the right side’s parts were in place and the nuts tightened, the torque wrench was used to finalize the instillation. 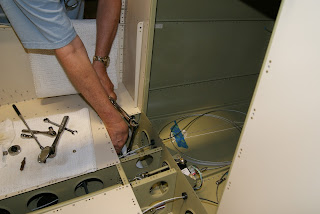 A few minutes after the above photo was taken the sky got very dark and the wind kicked up … so lowered the hangar door just in time to stay dry as the sky cut loose and it began pouring. This was followed a few minutes later with a major power outage and tornado warnings. Time to leave … so will bolt up the left side during the next work session.
Posted by John at 9:27 PM