The first order of business for today’s work session was to drill the canopy frame forward bow at the locations marked yesterday. Mike K. was able to help as a spotter making sure the drill was held perpendicular to the bow as the #40 holes were drilled. 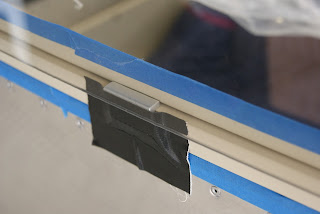 One of the spacers made from 1/8" aluminum angle. One side of the angle was cut to 5/32" so it fits on the canopy frame. 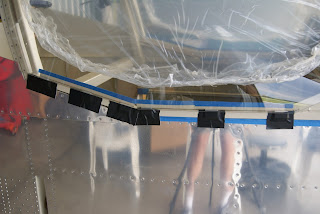 For some reason the right side of the C-1201 canopy does not fit as well as the left side. If the canopy was shifted to obtain the 1/8” clearance between the canopy and the upper forward fuselage skin, there would be a bulge at the aft end of the canopy where it is to sit flat on the aft canopy bow. A compromise needed to be made so pulled the canopy forward just enough so the aft portion sat flat on the aft canopy bow. This created less than 1/8" of clearance between the canopy and upper forward fuselage skin on the far right side of the canopy … so will need to do a little sanding to remove some material there. Once the position was finalized duct tape was placed on the canopy to hold the position for drilling. 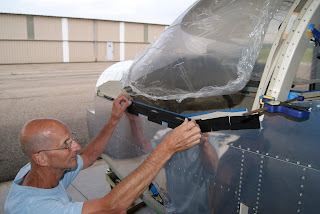 Mike K. placing duct tape on the side of the C-1201 canopy to hold it in place for drilling at the front and aft canopy frame bows. 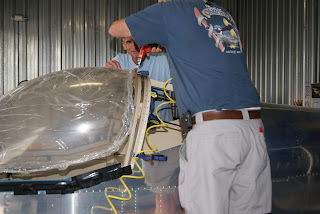 Mike K. spotting as one of the holes in the canopy frame’s aft bow is being drilled with a #30 plexiglass drill bit.

A word of caution … when drilling through the plexiglass into the forward bow or aft bow, be very careful because the canopy can make it appear as though the drill bit is in the correct position, when in fact it is not. Having a spotter will help, but the best thing is to make a mark on the canopy where it appears the hole should be made then look straight into the hole from above to verify the mark is actually in the center of the hole … if OK, drill on the mark when the spotter verifies the drill bit is perpendicular to the hole. 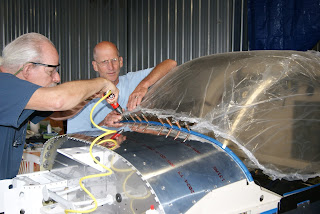 Using the #30 plexiglass drill bit to drill through the canopy and into the existing #40 hole in the front bow.

Ran out of time this work session mostly due to making the spacers … so did not quite get the canopy completely drilled, so will finish that task during the next work session.
Posted by John at 10:35 PM