The better part of the afternoon was spent trying to get the tire/wheels balanced. The local matinance shop willing to balance the wheels was only able to balance the nose wheel. When we tried to balance the main gear wheels/tires the long valve stem interfered with the centering fixture for the alignment machine. At least the nose wheel is now balanced which was really my main concern.  Subsequently, quite a few phone calls were made trying to locate a tire shop that has one of the old fashion bubble wheel balancers which hopefully can do the job. Finally found one, so first thing tomorrow will make another attempt … with luck the main gear tires/wheels will fit on the balancer so they too can receive a balancing.

By the time I got back to the hangar it was late, but was able to make some progress and installed the nose wheel. As mentioned in the previous post, prior to mounting the nose wheel and tire assembly onto the nose wheel fork, an adjustment procedure needs to be made to induce a drag in the WD-1230 nose wheel fork assembly.  Believe it or not, a whopping 26 pounds of drag needs to be induced in the fork assembly. This is accomplished by running a wire through the two axle holes in the WD-1230 nose wheel fork and attaching the wire to a scale. I wrapped the wire around a Cleco and used the Cleco to straddle the hole and hold the wire. The nut securing the nose wheel fork onto the WD-1201 nose gear assembly is tightened, compressing the washers … which generates a drag. A digital fish scale was used to make the measurements … the scale was connected to a wire running through the axle holes and as the scale was pulled, the force necessary to move the fork is noted. The nut is to be tightened, thus compressing the two washers until the pull scale reads 26 pounds at the moment the fork begins to move. 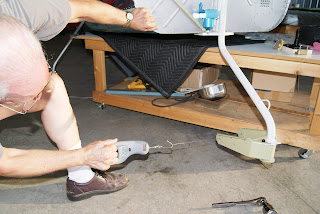 The nut securing the nose wheel fork assembly is tightened until the pull scale reads 26 pounds. Looking closely at the photo, one can see I’m at 25 pounds and pulling just a little bit more moved the fork assembly.

Have to say, this is a huge amount of drag … so much so, I had to hold the fuselage with one hand to prevent it from sliding off the table while I was pulling on the fish scale. When the 26 pounds of drag is obtained, the nose wheel fork becomes quite stiff … moving it is rather difficult. I can see where this may make tight ground maneuvers at slow speeds quite … interesting.

When the drag on the WD-1230 nose wheel fork is loaded to 26 pounds, the next step is to drill the WD-1201 nose gear tubing for a cotter pin by using a slot in the castle nut as a guide. Two #30 holes are drilled so a cotter pin can be installed to secure the nose wheel fork’s nut. 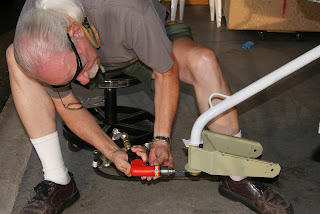 Drilling the first of two holes into the WD-1201 nose gear tubing to secure the nut keeping the WD-1230 nose wheel fork in position. 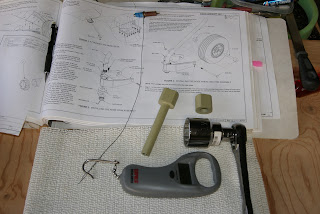 The flat spot on the U-1210A axle and U-1210B spacer can be seen here along with the assembly instructions for the nose wheel fork assembly, wire, fish scale and 1 1/2" socket. 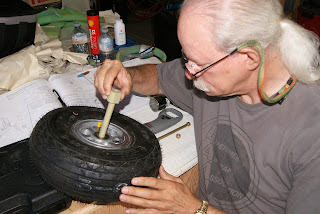 Sliding the U-1210A axle into the nose wheel. 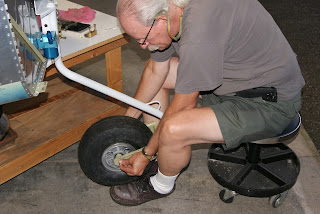 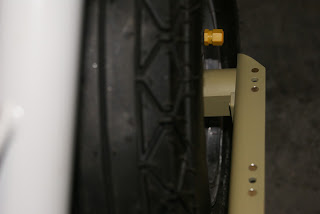 Because ball bearings are used in the nose wheel, the tightening procedure is different than that used for the main gear bearings. Basically, the nut on the axle bolt is tightened until the wheel no longer spins without any drag … from this point the nut is backed off 1/4 turn. The tire should now rotate smoothly without any drag. Must say, I’m surprised the axle is not drilled for a castle nut and cotter pin … but it is not. 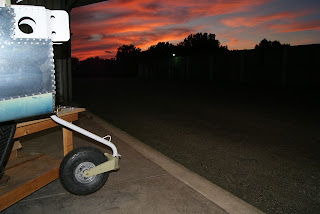 Finished nose gear assembly and a sunset reminder … it is time to leave the hangar.
Posted by John at 11:07 PM