The 3/8" drill bit chosen for this task is a DeWalt pilot point drill bit. Because there is already a hole through the firewall and WD-1201 nose gear assembly, the tip on the drill bit will keep the drill bit tracking straight through the existing hole. 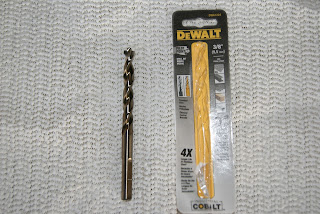 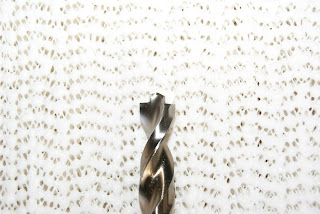 A closer look at the tip on the DeWalt 3/8" pilot point drill bit.

With Bernie’s assistance and a little finessing by way of lifting up on the tailcone, the holes in the WD-1201 nose gear assembly and firewall were brought into alignment and the temporary AN3 bolt was inserted and tightened. The other hole was then drilled out to 3/8" and then deburred. After deburring, the proper bolt for this location was inserted and an engine mount vibration isolator is temporarily installed along with a washer and nut to keep the nose gear assembly tight to the firewall so the remaining hole can be drilled. 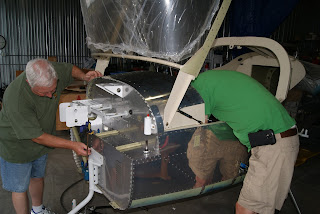 Bernie about to pull the AN6-27 bolt through the firewall as I push it towards him from inside the cockpit. Note the smaller AN3 bolt holding the position and keeping the nose gear assembly tight to the firewall. 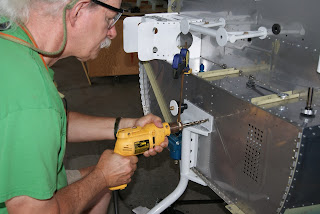 Drilling the remaining hole in the WD-1201 nose gear assembly into the firewall using a 3/8" DeWalt pilot point drill bit.

Until the RV-12 takes to the sky for the first time, it could be considered a land yacht of sorts. And what self respecting yacht owner would not have an anchor for his pride and joy?  So Mike K. loaned me an anchor to help keep the nose wheel anchored to the ground. Decided to make a cantilevered support for the anchor and some additional weights out of two pieces of 1/2" pipe and insert the pipe into the nose gear tubing. The pipe has some duct tape wrapped around it so it will not mar the powder coating on the gear tubing. 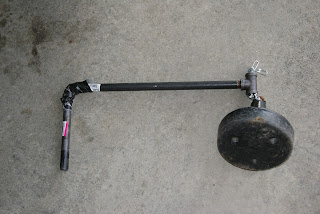 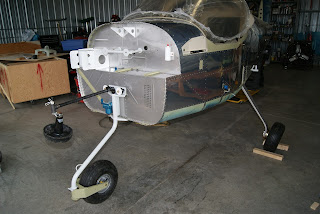 Mike’s 15 pound anchor suspended beyond the front tire offered enough weight to keep the tailcone from hitting the floor.

The 15 pound anchor was likely enough weight … but just to make sure, Bernie brought over a couple of additional weights so they were also added bringing the total to 37 pounds. 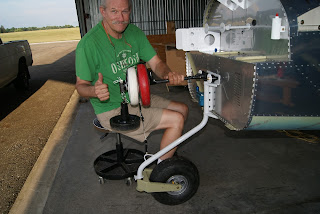 Final combination of Mike K.’s anchor and Brenie’s weights … a total of 37 pounds.

A wire was wrapped around the tie down loop on the nose gear and run up to the cantilevered pipe to minimize side to side swing. This can be seen in the above photo. Although a little Rube Goldbergish, the weights will only be needed for a little while until the engine is mounted. Thanks Mike and Bernie for the use of the anchor and weights.
Posted by John at 10:25 PM