It is time to begin working on the fiberglass lay-up for the canopy fairing. Decided it would be prudent to temporarily screw the left and right instrument panel pieces in place to hold the shape of the F-1240 upper forward fuselage skin for the fiberglass lay-up. Prior to installing the panel pieces, both connectors were moved to the center of the instrument panel tray and all the wiring was covered with a large piece of paper from one of the kit shipments. (Us builders of Van’s kits know, there is no shortage of paper when building a Van’s kit). 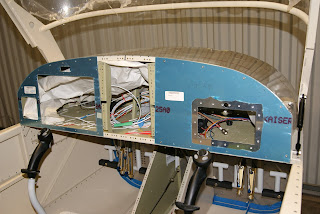 Left and right instrument panel pieces temporarily screwed in place to hold the shape of the F-1240 upper forward fuselage skin for the fiberglass lay-up. Paper was placed over the wiring to prevent unwanted resin from reaching it.

One oversight that caused lots of extra work was removing the paint and primer from the forward arms of the canopy frame.  Last fall, in my exuberance to finish paint all the interior components, I did not read ahead far enough to realize the forward arms of the canopy frame should not have been painted because of the bonding that takes place there. Easy to fix with an angle grinder outfitted with a 3M Scotch-Brite pad. As tough as it was to get the paint and primer off, doubt it all had to come off to get a good bond but it was, for the most part, all removed down to metal.  Once the paint was removed the metal was scuffed up with 80 grit sand paper. 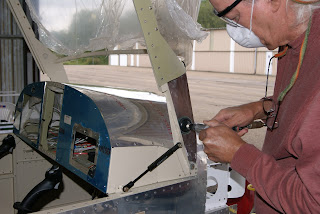 Using the angle grinder outfitted with a 3M Scotch-Brite pad - the unwanted paint and primer mistakenly placed on the canopy frame’s arms was removed. This took up quite a bit of time ... fellow builders may want to mask this area when painting the canopy frame. 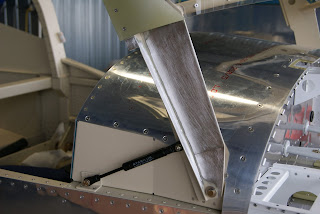 Canopy frame arm after removing paint and primer then scuffed with #80 grit sandpaper.

Begin the great duct tape dilemma. The plans instruct the builder to place one layer of duct tape on the F-1240 upper fuselage skin and three layers of duct tape on the F-1270 side skins. In preparation for this step, the DOG Aviation procurement department purchased a roll of duct tape to have on hand. As the tape was pealed away from the roll it seemed paper thin … not nearly as thick as what I am used to seeing. A little research revealed duct tape comes in various mill thicknesses at my big box store ranging from 9 to 15 mills.  When placing three layers on the side skins the difference in thickness is huge. Sure wish Van’s would have said use 9, 11 or 15 mill tape … or whatever. Admittedly, at times, I tend to over analyze … this is one of those times. 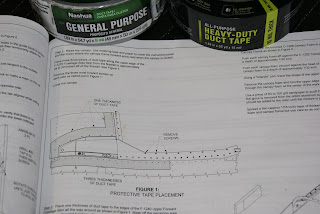 Van’s wants three layers of duct tape on the side skins. That is rather vague … considering the difference in thickness becomes significant between 9, 11, or 15 mill duct tape when stacking three layers.

After pondering the situation for quite a while the thicker 15 mill tape was selected for the mission. This decision was based on nothing but a WAG (wild  ass guess) and assumption. The duct tape Van’s uses when packing the kits is NOT the thin stuff … it is thicker and has a tenacious glue.  They must go through many rolls of it. Hence the assumption, since it is in such abundance at Van’s, it is likely the tape they used for doing the canopy lay-ups.

The plans instruct the builder to cover the outside edges with of the F-1240 upper forward fuselage skin with one layer of duct tape and the F-1270 side skins with three layers. The instrument panel is to be masked off with paper and tape along with the coves where the canopy arms rest when the canopy is closed. In addition to the masking, the forward three screws need to be removed from both sides of the canopy ... then the canopy is lowered. 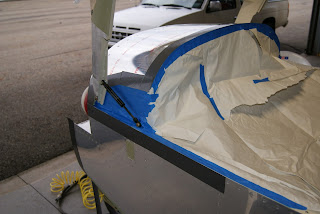 All the taping and masking is now complete and the canopy is ready to be lowered. 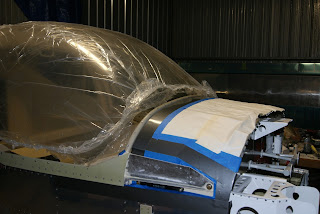 Canopy lowered and remaining portions of the upper forward fuselage skin are masked off with tape and paper.

Also rolled up some tape and placed it loosely over the washers behind the arms so if any resin drips down there hopefully they will be protected as well. The next step involves trimming the foam blocks and bonding them onto the forward arms of the canopy frame ... a job for the next work session.
Posted by John at 8:37 AM