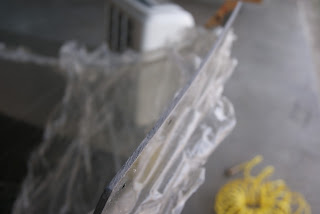 Canopy edge prior to finish sanding. 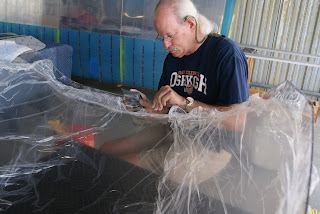 Sanding the edge of the canopy to obtain a smooth polished looking edge. 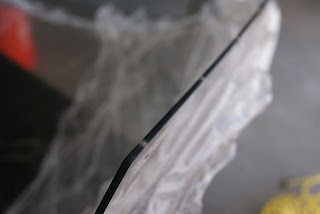 Canopy edge after being progressively sanded to 1,000 grit.

While about finished sanding the canopy edge (which took far longer than I thought it would),  Bernie and Mike T. came by the hangar and assisted placing the canopy back on the canopy frame for what will hopefully be the last time.

The C-1201 canopy is attached onto the aft bow on the WD-1219 canopy frame by using #6 pan head screws, washers and Nyloc nuts. The instructions say to tighten the hardware until it just gets snug and the screw no longer spins freely. After getting the canopy back on the canopy frame, my helpers left and I realized, with the canopy in the down position, getting the washers and nuts onto the screw will not be easy because there is not a lot of room between the canopy bow and the roll bar for fingers.  Decided it would be necessary to come up with a good way to easily install the hardware. Played around with a couple of ideas and the best working solution was to use a nut driver. The socket on the nut driver was filled with two nuts and the washer was taped onto the end of the nut driver. The additional nut was used to fill the void and keep the second nut close to the end of the nut driver. 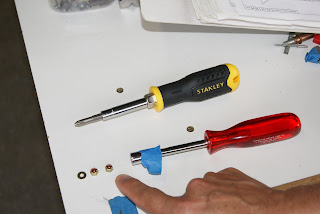 The working combination became two nuts inserted into the nut driver with the washer taped onto the end of nut driver. 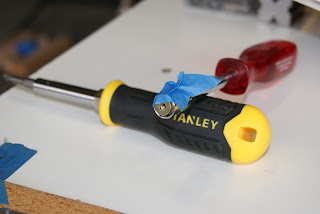 Once a working method was found, securing the C-1201 canopy onto the canopy frame’s aft bow was easily accomplished. Every other hole had a screw slipped into it to hold position as Clecos were removed and replaced with screws. The hardware was then tightened from the top down. 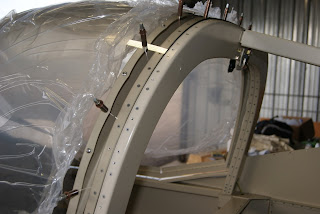 A screw is placed into every other hole to hold position because now that the holes are at #27, the #30 Clecos have a little slop in the holes. 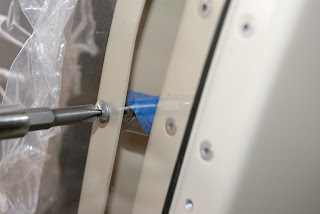 Photo of the nut driver being gently placed in position between the aft bow and roll bar while holding a washer so the screw can be threaded into the nut. 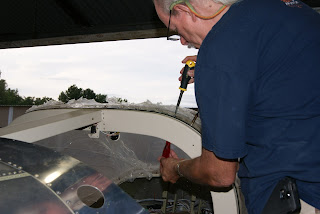 With the left side done, moved over to the right side and continued installing screws in the canopy. 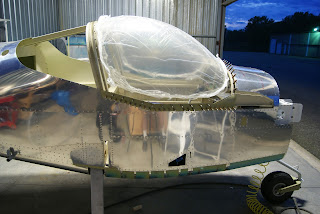 C-1201 canopy permanently affixed to the WD-1219 canopy frame’s aft bow using #6 pan head screws.
Decided it would be best to get a helper to finish off placing screws into the canopy skirt so plan to knock that out during the next work session.
Posted by John at 11:51 PM