Since the last post have not spent much time at the hangar ... but did mount the two main gear wheels onto the two landing gear legs. After not receiving much of an answer from Matco regarding the use of high quality automotive wheel bearing grease already purchased, shamed myself into rounding up one of aircraft greases recommended by Matco.  Not an easy task in a fairly small town, but after quite a bit of searching was finally able to round up a tube of Aeroshell 22 grease on Friday. Decided it best to do this should there be any premature wear issues with the Matco supplied wheel bearings … there likely would be no warranty unless one of the recommended greases on their approved list was used.  Based on input from the forums, Mobil 28 would have been the first choice … but could not locate any locally. Aeroshell 22 is also one of Matco’s recommended greases, so went with that. 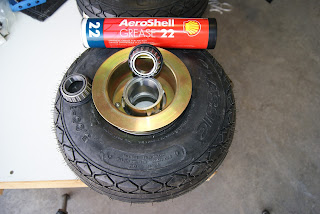 Wheel bearings ready to be packed with Aeroshell 22 grease - note the dirt seals are a permanent component of these bearings. These seals make the bearing a little tougher to pack because unlike automotive bearings, one can’t see the grease coming out of the other end of the bearing during packing.

No photos were taken while packing the wheel bearings because it is a messy job and did not want the camera anywhere near the mess. Basically, the same method is used as packing automotive wheel bearings … put on vinyl gloves, scoop a glob of grease onto the palm of the hand and work the grease into the slot on the bottom of the bearing, spin the bearing a little, and work more grease into the bearing. Did this for a few cycles, then generously slathered a thick coating over the rollers prior to inserting the bearings into the greased races in the wheel hub. These bearings are unique when compared to an automotive wheel bearing in that the grease seal is a part of the bearing. This makes it a little tougher to tell if the grease has worked itself all the way up the inside of the bearing … hence the reason for the multiple cycles of pack-spin-pack.

Friday afternoon, in my exuberance to get the RV-12 on the gear ASAP, I installed both main gear wheels on the landing gear legs and, later on Saturday, realized I forgot to make an attempt get the wheels balanced. Fortunately, I had not installed the cotter pins yet, so the wheels will be a piece of cake to remove. 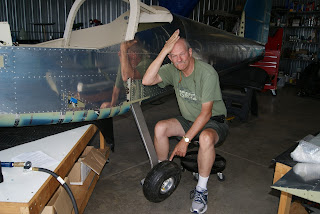 Gee, this must either be an “I just realized I forgot about balancing the wheels before installing them on the gear legs” or “I could have had a V8” moment … you decide.

Unfortunately, there were no matinance facilities open locally on Saturday … so will need to wait until Monday to hopefully find a facility on the field that can balance the tires/wheels for me. Decided to move on and prepare the WD-1230 nose gear fork for instillation. The WD-1230 nose gear fork needs to receive some machine countersinking along with having two holes tapped for 5/16-24 threads. 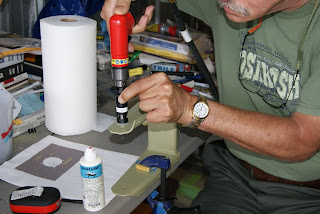 Machine countersinking one of the four rivet holes for the U-1210C anti-rotation plates using a #40-100 countersink bit.

Builder note: For those of you RV-12 builders that are adding the wheel fairings (or plan to do so in the future) while you have the machine countersink cage set up, now would be a good time to machine countersink the 12 rivet holes for the nutplates that will be riveted onto the flange on the WS-1230 nose wheel fork in the next section of the plans. May as well complete that task now. 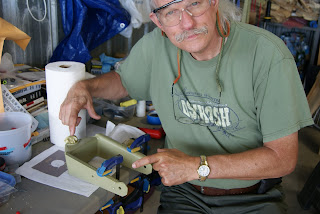 The rivet holes for the six nutplates in area my fingers are pointing towards can be machine countersunk now if the builder intends to install the wheel fairings.

After machine countersinking the rivet holes for the six nutplates used to install the wheel fairings, decided may as well also install the nutplates now. The called for AN426AD3-4 rivets appeared a little too short for my liking … since longer AN426AD3-4.5 rivets were in stock, used those instead. 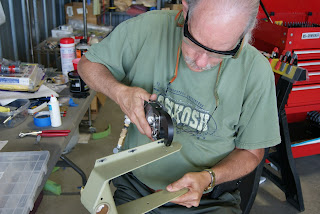 Riveting one of the six K1000-8 nutplates in place with a slightly longer AN426AD3-4.5 rivet. These nutplates will be used later in the next section of the plans to install the wheel fairings.

After riveting the U-1210C anti-rotation plates onto the WD-1230 nose wheel fork (which can be seen if looking closely at the photo below), one of the last things that needs to be done prior to installing the WD-1230 nose wheel fork onto the RV-12 is to tap the two holes adjacent to the bushing using a 5/16-24 tap.  These holes will receive a hex cap screws. The round head of the each cap screws will become the rotational stop for the nose wheel. 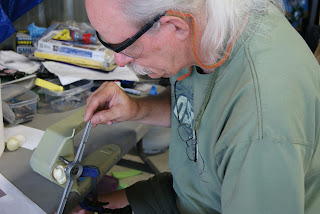 Tapping one of the two holes adjacent to the bearing with a 5/16-24 tap. These holes will become the rotational stop for the nose wheel fork.

The two cap screws and associated washers were rounded up and installed. Now the fork assembly is ready to install on the WD-1201 nose gear assembly. In addition to a large nut and washer, the WD-1230 nose wheel fork is mounted in conjunction with two U-611 conical washers which are called washers. I forgot to take a photo of them but they look the image below. 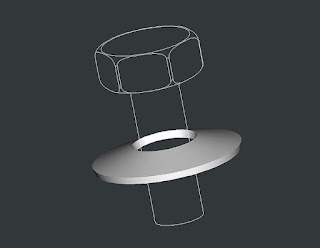 Drawing of a compression washer.

The RV-12 nose gear uses two of the above washers back to back. The upper washer is placed as in the image above and the lower washer is flipped upside down and mated to the first washer. The point of these washers will be to establish a “drag” so the nose wheel will not shimmy easily. This will be covered in more detail in the next post. 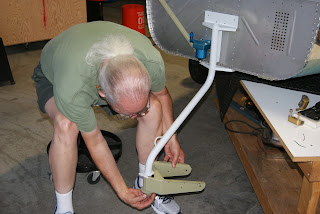 Installing the WD-1230 nose wheel fork, the two back to back U-611 Belleville washers, washer and nut onto the F-1201 nose gear assembly. Looking closely at the photo above, one can see how the cap screws create a stop for the nose wheel fork assembly when they hit the pice of metal welded onto the forward portion of the WD-1201 nose gear assembly.
Posted by John at 10:33 AM