Yesterday, finished off reinstalling the left C-1202 canopy skirt and securing the left side of the canopy (for the second time) with the #6 screws Van’s provides. But the extra work was worth it … the flush rivets really complete the look! 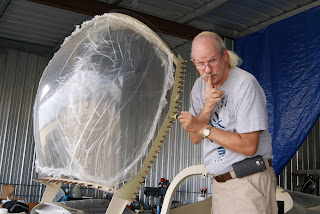 Replacing the canopy screws that Jan helped me with over the weekend. Shhh … mums the word. Jan does not need to know her trip to the airport over the weekend to help me was all for not. 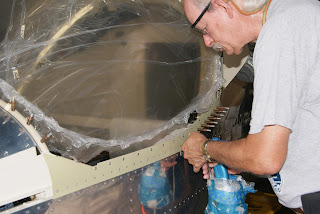 Using the pneumatic rivet puller to rivet the C-1202 canopy skirt onto the WD-1219 canopy frame using flush rivets in the place of LP4-3 pop rivets. 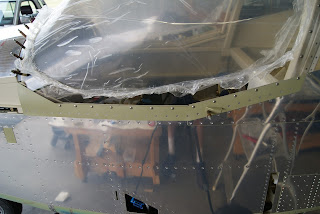 Completed instillation of the C-1202 canopy skirt onto the WD-1219 canopy frame using flush rivets. Did not rivet the canopy handle so there will be the option of paint or powder coat. 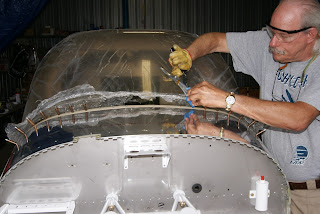 Riveting the C-1201 canopy onto the front bow of the WD-1219 canopy frame using the Van’s supplied AACQ4-4 pop rivets. 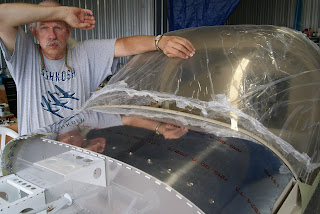 With the canopy now a permanent part of the canopy frame, it was time to begin installing the canopy latch and handle. The plans instruct the builder to insert the WD-1218 canopy latch into the hole in the WD-1219 canopy frame and install the washer and C-656 handle. A test is to be made of the ease of rotation … this is one place where a tight fit with drag is very desirable so the latch will not move on its own. At first I thought there was enough drag but think it was caused by some overspray getting into the hole. After a few insertions and greasing of the canopy latch shaft per the plans, the latch began moving quite freely. Van’s solution to induce some drag is to “carefully pinch” the lower portion of the canopy frame tube that the shaft on the latch slides into.  Frankly, it is totally daft to be doing this now … especially at this location. More of my thoughts on that below.

Here is the issue … trying to deform the bottom of the tube is not that easy at this stage of construction (or wise) and if really successful the builder will have a very difficult time inserting the canopy latch into the pinched hole.  Ask how I know. My first attempt was to use a C clamp to deform the hole ... hardly enough room with all the stuff in the way but I was able to deform the hole slightly but not enough, as the clamp would slip off the edge of the tube. Next a slight tap with a large pin punch slightly deformed the end of the hole, but then I was unable to insert the canopy latch’s shaft into the hole … had to tap it down from up above to open up the hole enough so it could be inserted from below … however, the drag was still not enough. 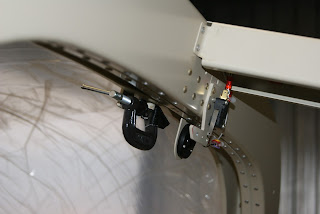 Attempting to use a C clamp to deform the bottom of the canopy frame tube … this worked a little, but did not get the job done.

Then it occurred to me … just flatten the top of the tube a little. Because the handle is installed from below, it makes more sense to deform the top of the tube rather than the bottom of the tube where you need to insert the shaft of the latch handle into the hole. I accomplished this task by taking a hard plastic faced mallet and placing it against the top edge of the tube in the canopy frame and gently hitting the mallet with a dead blow hammer a few times until the edge of the tube deformed inward. The canopy latch was then greased and tapped in from below. This resulted in a nice positive drag. I did place a little blue Loctite on the threads of the screw during final instillation. 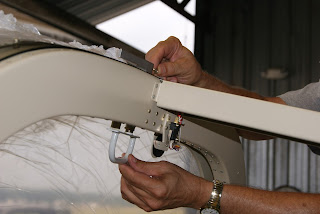 Installing the screw that will hold the canopy handle onto the canopy latch … this was during the initial trial fitting. 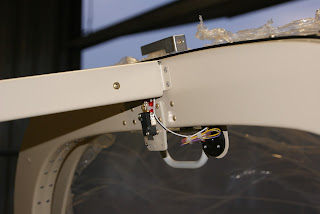 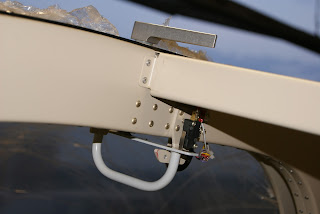