The section of the plans that covers the instillation of the canopy has by far the most pages devoted to it … 23 actually. Last year there was the introduction of the canopy latch micro switch and at that time a few of the canopy latch parts were slightly modified by Van’s to create more of a positive latch and a -1 was added to the part number.  In addition to the instructions for adding a micro switch, section 34 received an additional seven pages which mostly covers various methods of sealing the canopy at numerous locations. A trip was made to the printer so the changes to the plans and the new additional pages could be printed out and inserted into the instruction book.

One of the modified parts is the C-1205 latch block which is now the C-1205-1 latch block. The latch block will be installed under the roll bar and has a trough which captures the canopy latch. Prior to instillation it requires a little finessing by way of countersinking, taping and drilling. The latch block comes with two holes drilled into it and the builder is to countersink the holes for the head of a #8 screw. Easier said than done because there is a trough cut into the latch block and it interferes with the countersinking bit. I ended up taking apart the countersink cage and placing the center portion into the drill press then SLOWLY countersunk down through the wall of the trough and finally into the hole. 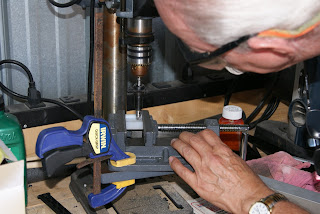 Using the drill press to SLOWLY chew away at the wall of the trough on the C-1205-1 latch block and finally on to countersink the hole for a #8 screw. The countersink cage was disassembled and the center portion was placed into the drill press. 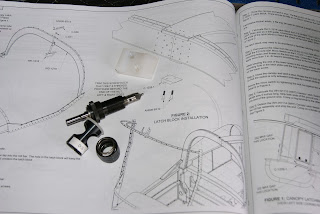 Finished machine countersinking of the C-1205-1 latch block. Because of the white on white it is hard to see but zooming in on the photo one can see the wall adjacent to the rear countersink was carved into a little by the countersink bit. 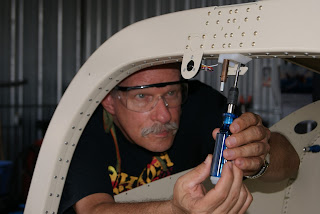 Using the threaded hole in the C-1205-1 latch block as a guide to tap the hole in the roll bar squarely using an 8-32 tap. 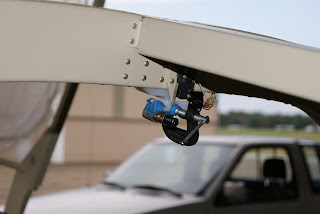 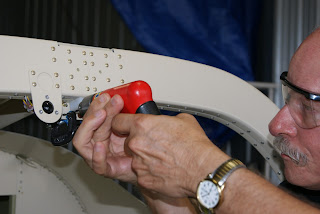 Match drilling the C-1214 latch block using the holes in the F-1231F-1 latch plate as a drill guide.

After drilling, the left most hole in the C-1214 latch block is countersunk for a flush rivet this countersink is to be made deeper than flush. The C-1214 latch block is to be shaped to conform to the shape of the F-1231F-1 latch plate … the Scotch-Brite wheel was used to adjust the shape as necessary. The C-1214 latch plate was then installed using a CS4-4 rivet and two LP4-4 rivets. Because the micro switch and associated wiring has already been installed, all that was necessary to complete the canopy latch instillation was adjusting the positioning of the micro switch. The switch was adjusted so it just barely activates as the latch handle drops into the trough in the C-1205 latch block. 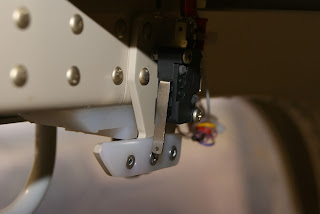 Completed canopy latch and micro switch instillation.
Posted by John at 7:33 AM