Instillation Of The C-1201 Canopy Begins 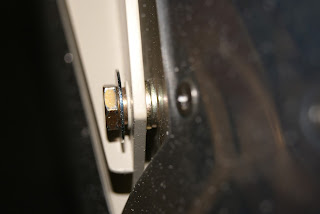 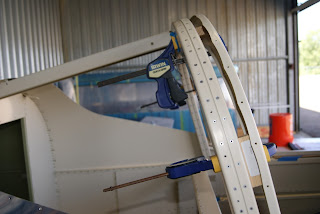 After getting the WD-1219 canopy frame to sit with the proper clearances, four wooden C-1211 alignment blocks are clamped in the gap between the roll bar and aft canopy bow.

The next step is to install the C-1203A&B canopy attach angles. The angles were drilled and fluted per the plans long ago so they could be painted … all that was required now was to align the angles with the inside edge of the canopy frame and use them as a drill template to match drill the WD-1219 canopy frame. 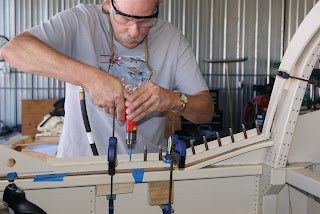 Using the predrilled holes in the right C-1203A canopy attach angle to match drill the WD-1219 canopy frame using a #30 drill bit. Note – the 1/8" thick cardboard spacers can be easily seen in this photo. 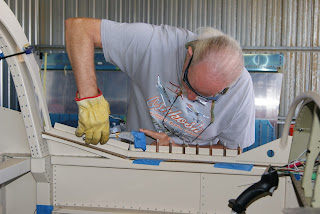 Now that the canopy attach angles are riveted onto the canopy frame, the next step is to fish out the canopy from the shipping crate and prepare it for instillation. Van’s instructions suggest the builder remove approximately three inches of the protective film from the edges of canopy … but leave the remainder of the film on the canopy for protection from scratches. 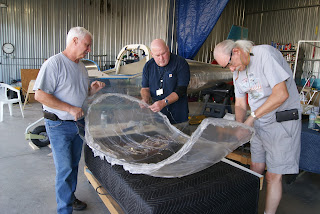 Bernie, Mike and Moi pealing back the tenacious and sticky plastic protective film from the C-1201 canopy to prepare it for fitting onto the WD-1219 canopy frame.

Prior to installing the canopy onto the canopy frame for the trial fit, a strip of painter’s masking tape is to be placed over the forward bow in the canopy frame just aft of the instrument panel but not pressed down. The idea here is once the canopy is positioned, the portion over the bow is to be pressed down onto the bow. This will leave a faint mark in the tape at the contact point where the canopy was pressed down onto the bow. This will create a line of contact where holes will be drilled for riveting the canopy onto the bow. Bob, fellow builder in reported having great results using carbon paper in the place of tape to make marks on the bow where the canopy touches the bow. Unfortunately, the DOG Aviation procurement department dropped the ball and forgot to get some carbon paper to try this seemingly sound technique … so the masking tape method was employed. 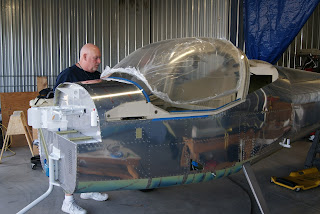 All and all the canopy fit was good - the left side was perfect but the right side is slightly off … but will be OK just not quite as perfect of a fit as the left side. The cutout on the forward portion of the canopy may need a few thousands removed, but over, all it looks good. After removing the canopy, the painters tape on the bow is to be marked for drilling beginning on either side of the center weld and making marks at 2" intervals on the line left on the tape from contact with the C-1201 canopy. 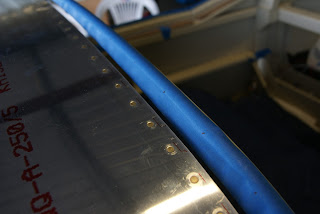 Unfortunately, did not have time to drill the bow because of a commitment, so that will be the starting point for the next work session.
Posted by John at 7:59 AM