Seemingly a long time in the making - today marked another momentous occasion at DOG Aviation as the eagle’s talons met terra firma for the first time. After trying unsuccessfully once again today to have the main gear wheels balanced, decided to bolt them on and move on. If a balancing opportunity presents itself in the future, it will only take a few minutes to remove the wheels …. but for the time being, it is time to move on.

Today, with the help of Bernie and Mike, the gear legs were used to lift the fuselage off the work bench. The bench the fuselage was sitting on for so many months was then slid out from underneath the fuselage and the RV-12 was lowered onto its landing gear ...  tires taking purchase on terra firma for the first time. It went easy enough, however Bernie did skin a knuckle while moving the workbench out from underneath the fuselage. It was later discovered that one of the wheel locks had become set which made the bench move at an odd angle clipping Bernie’s knuckle on the front gear leg. Until the engine is mounted, some weight will need to be placed up front so the RV-12 can be rolled outside to sand the fiberglass once the canopy layup is completed ... in the mean time, a saw horse is needed to prevent the tail from smacking the hangar floor. 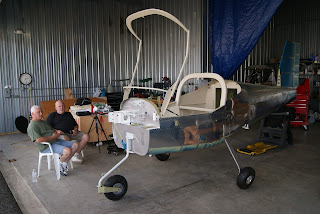 Bernie and Mike taking in the vision of the DOG Aviation RV-12 on the gear for the first time.

With the RV-12 now “on the gear”, decided to resume work activities on the canopy. The F-1240 upper forward fuselage skin that covers the instrument panel needed to be screwed in place so some measurements can be made to the canopy bow. After securing the F-1240 skin in place it was quickly discovered there is a clearance issue and my work for the evening came to a halt because the aid of another helper  will be required to lift the canopy frame so the F-1240 skin does not get seriously bent. The problem: The canopy frame wants to snag the F-1240 skin on both sides of the fuselage. The worst side is the right side as can be seen in the photo below. Apparently, this is not a big deal because Van’s mentions the possibility of having clearance issues in the plans and instructs the builder to place washers behind the canopy frame at the pivot point to flex the canopy frame outward to obtain the necessary clearance. 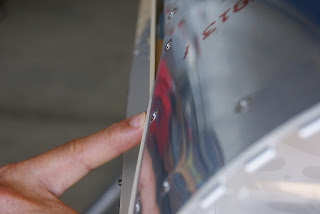 If the canopy frame were to be lifted now it will snag the F-1240 upper forward fuselage skin in the area where my finger is pointing. As can be seen, the clearance is off by about half the thickness of the metal on the canopy frame. The same issue is on the left side, but to a lesser degree.

The left side of the canopy frame is not quite as bad as the right, but it will still snag the F-1240 skin … so tomorrow will have to get some help to remove the canopy frame to install some washers behind it. While working on the canopy frame and screwing the F-1240 skin in place it was quickly realized that being “on the gear” creates new challenges … by way of unwanted movement.  Discovered I needed to quickly make a pair of wheel chalks, so broke out the jig saw and crudely made a pair. 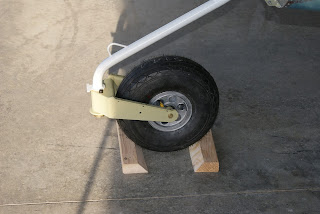