After a day away from the RV-12 giving Bernie a hand with a yard project, made it out to the hangar yesterday and was able to verify the fairing lay-up did not permanently glue the canopy frame to the fuselage. At this point, Van’s would have the builder remove the canopy from the fuselage and do the sanding on the workbench. Since I really do not want a bunch of fiberglass glass dust inside the hangar, decided I will roll the fuselage outside and do most of the sanding there.

Some builders have had trouble breaking the canopy lay-up free from the fuselage ... so prior to sanding and filling, decided it best to first make sure the canopy fairing lay-up could be broken free from the fuselage. The canopy was unlatched and since the rear window is still out, it was easy to just reach inside and flex the left side of the canopy frame’s rear bow upwards a few times using progressively more force until there was a dull "pop" sound. Walked around to the right side of the aircraft and repeated the process and was rewarded by another "pop' as the right side broke free. My sigh of relief was accompanied with a big smile … the use of a very thin film of Vaseline as a release agent was a good call.

I did not attempt to open the canopy all the way for fear the metal would get dented. Once the fairing has been sanded and low spots filled, the canopy frame will need to come off so the fairing lay-up can be trimmed back to match the pattern supplied by Van’s. To do this the canopy frame pivot bolts will need to be removed … and to do that, they need to be exposed. Decided it best not to use the Van’s pattern and rely on blind faith … so I went “high tech” and used a magnet to locate the heads of the bolts. Worked great! Getting “high tech” and using a magnet in lieu of the paper template to locate the canopy frame’s pivot bolts. A circle was traced around the magnet to mark the bolt location.

Now knowing where the bolts are, the big question is how best to get to them? I decided to use a Dremel with a sanding drum to cut a divot in the fiberglass by holding the edge of the drum at a 45 degree angle. Next a #19 drill bit was turned by hand a few times until I could see the metal of the bolt, then the sides were opened up a little using a #12 bit by hand to shave the fiberglass and open the hole up enough for the next Dremel tool which was a small carbide coated cylinder.  If following my foot steps here, when using the carbide coated cylinder - use a slow speed on the Dremel, plus use very little cutting pressure and continually move the bit around. The reason for all this is if spinning too fast or left in one spot too long, the epoxy resin will melt from the friction and quickly clog the fine abrasive on the bit. 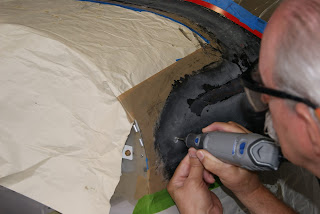 Using the Dremel outfitted with a carbide cutter cylinder to open up the bolt hole so a 1/4" sanding drum can finish the job. 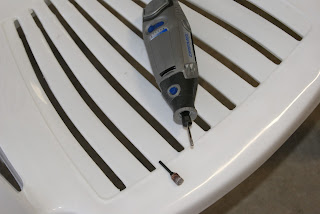 The Dremel with the carbide cutting cylinder and the 1/4" sanding drum.

The above procedure was used until the hole was opened up enough to accommodate the Dremel’s small sanding drum. The sanding drum was extended over the edge of the rubber so the screw at the tip of the sanding drum would not scrape on the bolt head. The sanding drum did a good job of opening the hole the rest of the way … it was a piece of cake. Did switch to a larger 1/2" sanding drum as the hole got larger … but that really was not necessary. 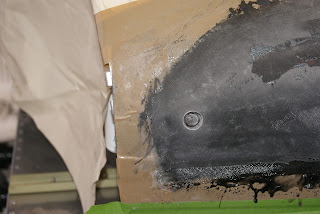 The bolt hole needs to be made just a little larger to allow a socket to slip into the hole. 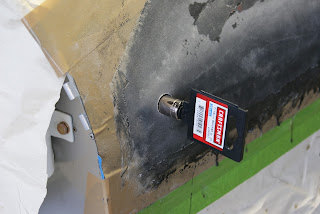 The bolt hole is now opened up enough to allow a socket to be inserted onto the canopy frame pivot bolt.
Moved over to the right side and used the same procedure to expose the bolt and enlarge the hole so a socket would slip over the bolt. Knowing what to do made the right side much faster to complete. Both bolt holes will be fine tuned when the canopy is removed for cutting. The holes will be sanded out to the piece of aluminum tubing that was added to make a nice tunnel for the bolt.
﻿
Posted by John at 7:30 AM