Yesterday, after the morning rains subsided, the RV-12 was rolled out of the hangar and the canopy fairing sanding process started in earnest. The sanding process began with 80 grit sand paper. In the area of the canopy frame arms, it was more for removing rough edges and to prepare it for a heavy brushing of resin. 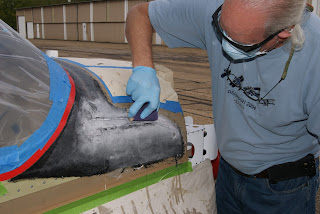 Sanding the lay-up on the canopy frame’s arm down to smooth up the rough edges.

The main area of focus (and the most time consuming) was the area where the fiberglass lay-up meets the red electrical tape on the canopy.  I used a piece of 2" diameter PVC pipe along with a small wooden block to sand down to the level of the tape (which is still the second tape layer). A lot of care was used during the sanding process not to cut through the tape … yet making a smooth transition to the tape. 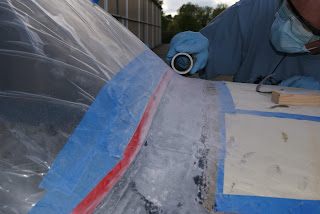 Using a 2" diameter PVC pipe and 80 grit sandpaper to carefully sand down the resin in the area of the red tape without cutting into the red tape. 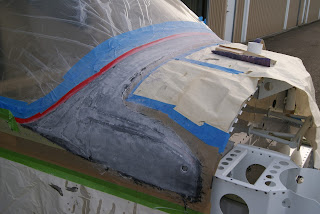 Most of the sanding is almost done to prepare the lay-up for the heavy coating of resin that will be brushed over the entire lay-up.